I'm tinkering with a cheap old alarm clock LCD screen. I think the LCD is multiplexed (there is only one row of connectors along the top of the screen, etched (or something) into the glass, and there doesn't appear to be any common ground or anything from the circuit board the LCD rests against). The clock itself is powered by a single AAA battery. There is no driver circuit board or anything directly attached to the LCD (as many hobbyist purpose-built ones seem to have), so I need to provide the current directly to the LCD. It appears that the screen itself receives about 3 V AC to activate a given region, as measured by a multimeter from the alarm clock circuit board.

So my question: how can I create this AC current from a DC source of around 1.5 V DC? Would it be possible to also do this from 5 V DC (provided by my Arduino)? I would like to avoid (if at all possible) up-converting to 110 V AC first (it seems to be a common recommendation from google searches). I have many basic components (resistors, caps, transistors, pots, diodes, etc) laying around in my 'nerd boxes' which I would prefer to use over specialized components, such as purpose-made inverters or the such, to do this.

As may be evident, I am somewhat new to electronics tinkering and as such may be way off with my expectations. I will respond to comments/answers, and can post pictures once I get home if it would help. I appreciate any help I can get on this :)

You identified the LCD as being multiplexed—which it very likely is—so the AC you're seeing is probably just some segment being sequenced.

A microcontroller toggling pins in succession will indeed produce AC, however calling "x V AC" that is an extreme red herring. It is better described as a multiplexed signal with such a frequency and some voltage (amplitude, not AC voltage as measured by a meter).

Atmel's app note AVR340: Direct Driving of LCD Using General Purpose IO may be of use to you. This portion describes the "AC" that you're seeing and shows why. 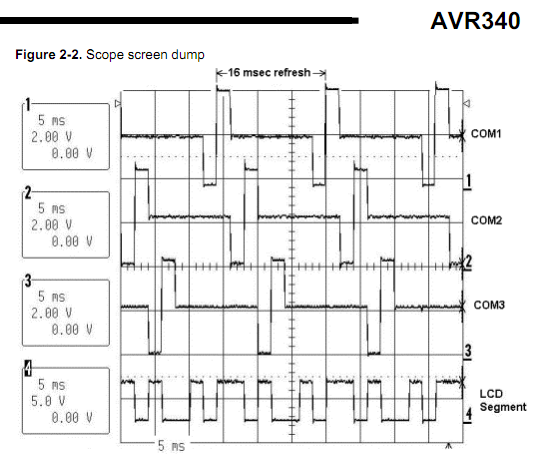 To energize a segment, the waveform to that segment must be 180 degrees out of phase with its COM waveform. The voltage difference between the segment and COM signals will therefore be typically 5 Volts AC, which causes the segment to become visible after 300-400 msec of refresh cycles.

To de-energize (turn off) a segment, the COM and segment waveforms should be in phase with each other while that segment’s COM is active, that is, not at 2.5 volts. So, a LCD with all segments OFF will have the segment inputs IN PHASE with each COM input. (COM3 was omitted from Figure 2-2, since only 4 channels were available.)

Incidentally, it's possible to drive a 3-way multiplexed LCD entirely with logic-level signals. To drive the display, run the common wires through all eight combinations of high and low, and drive each segment wire such that at least two of the three segments it controls will be "correct" (a segment will be "clear" if the state of the segment wire matches the state of its common wire, and "dark" if it differs). It turns out that no matter what pattern of light and dark segments one wishes to display, every segment that's supposed to be "dark" will be energized 3/4 of the time, and every segment that's supposed to be "light" will be energized 1/4 of the time.

This is a technique I invented myself in the 1990's, and have used in a couple of product designs. The contrast ratio is the same as what one would get using 1/2-bias (as shown above), but not as good as what would be obtained using 1/3 bias. In my implementation, I had to clock data through shift registers every frame, which used some current; if the circuitry were built into an ASIC I'm not sure how the efficiency would compare with that of a conventional multi-voltage technique.

Does your LCD look something like what's in this datasheet?

You may find that using a micro (to generate PWM) is more practical than inverting DC to AC. I doubt that the LCD will draw much current.