Calculate LED current when Vf is greater than source voltage

The problem is that the green and blue diodes have a \$V_f=3.3V\$. From experience I know the LED's will work at 3V with a lower brightness (current), but I can't figure out what is the current under that scenario. If I try to use the same formula above:

You really can't accurately predict the current in this sort of application. If you use the datasheet curves, you can guesstimate what it should be (roughly) but slight changes in supply voltage, in driver drop and changes in temperature (as well as part-to-part variations) will cause large changes in the current.

As you didn't grace us with a link to the part datasheet (assuming that a decent one even exists), I'll pull one at random (an Rohm SMLP36RGB2W3) off the interwebs and refer to it: 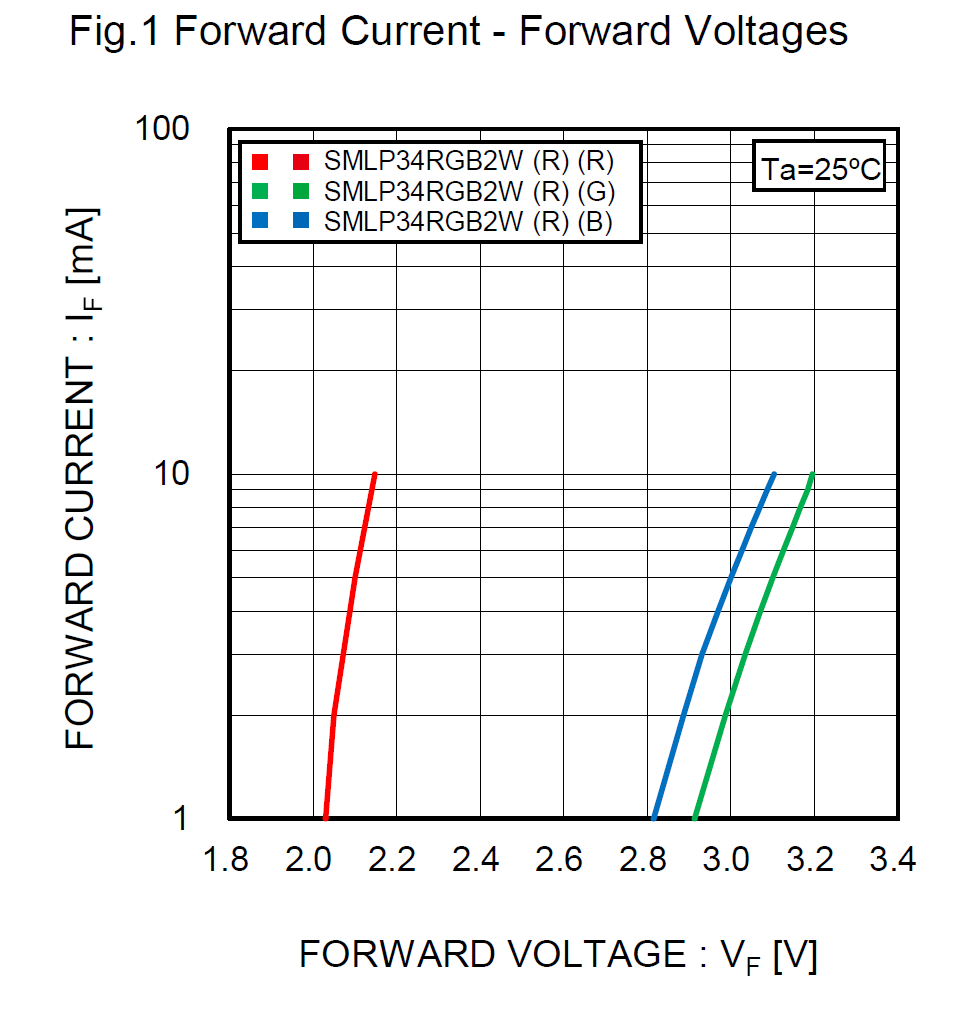 If the green was GaP, it would probably be workable (over moderate temperature range and with a tightly regulated Vdd) but you're really in guessing (or at least empirical testing) territory rather than engineering territory. You certainly will not be able to get a stable "white" by combining RGB since the color balance will change radically with supply voltage and temperature.

While the datasheet for the led will tell you what \$I_f\$ should be when \$V_f\$ is 3V (look at If graph), it is not exact. As diodes vary from batch to batch, or even from diode to diode in a single batch, there are two ways to find out what the actual current is.

Since the \$V_f\$ and the \$I_f\$ of a diode are very closely paired, providing an exact level of one will provide an exact level of the other. So the first method is a Constant Current Source. Most common regulators can be put in Constant Current mode, and setting it to around 16mA with a pot should give you the Forward Voltage that matches 16mA. Adjust until the measured voltage is 3V exactly and you will know what the resistance of the pot is and conversely, the current.

The simpler method, use a ammeter/multimeter in current mode in series with the diode provided exactly 3V.

Not the answer you're looking for? Browse other questions tagged led ohms-law or ask your own question.