L298 high side driver: how does this actually work?

How does the high-side driver actually switch when VB < VE < VC? For example, if Vs is 40V and Vss is only 5V, the base (as the diagram is drawn) is lower than both collector and emitter voltages, so I don't see how the high-side transistors are doing anything (other than maybe pulling the load up to ~4V and getting hot). Is there some base-drive logic that's not drawn in the diagram? I was thinking that it's possible the high side AND gates are actually open-collector, so that normally they would be pulled up to Vs through an internal resistor which is not drawn. That would sort of work - but in that case, the current gain is still limited by the inherent diode drop in the transistor, which also would change depending on the load current...

Is there a good analysis of the actual operation of the L298 h-bridge? It seems to be more complicated than it looks.

I've attached the diagram from the datasheet for convenience. 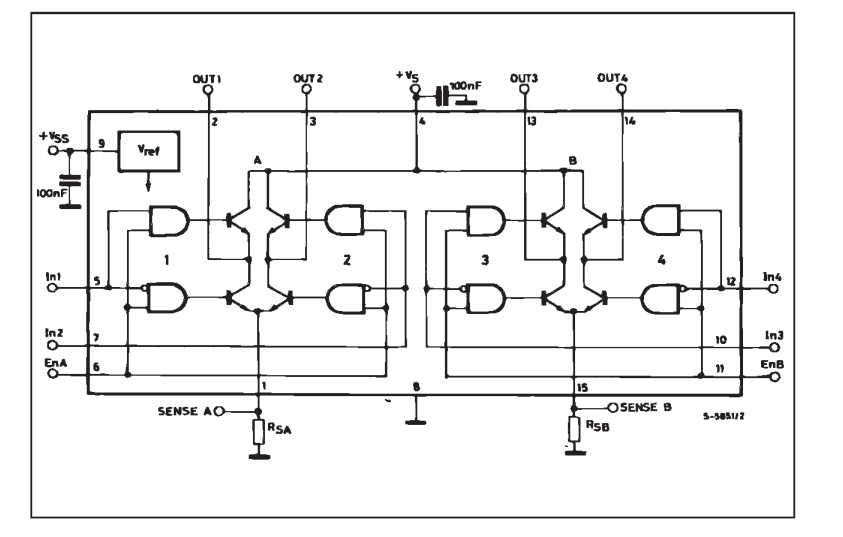 I think you'll probably find your answer in the L293 data sheet - it's the lower-power version of the 298 (without the heatsink). Here's what the 293 output stage looks like: - 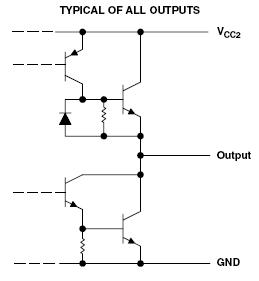 The 293 (and I strongly suspect the same for the 298) has a PNP transistor that is much more conveniently driven from a low side logic signal.

I'm fairly sure the two devices work internally the same way - they have pretty-much exactly the same poor output specification. The diagram shown in the 298 spec "hints" at the limitations inherent in this type of H bridge because of the use of NPN transistors at the "top" and darlington transistors at the "bottom". See also this for alternative devices using MOSFETs.

4
High and Low Side Driver vs. Half-Bridge Driver
2
High-side switching 12V with BJT/MOSFET
0
High side N channel gate driver
0
How can this driver power a high-Side MOSFET?
0
Using Dual [High Side/Low Side] Isolated Gate Drivers
0
Why use a PNP transistor on the high side of an H-bridge?
1
Discrete high-side driver for GaNFET