Can I use ATmega328 TX/RX pins to drive an R2R network and still use the serial port to program the MCU?

I wanted to make a simple function generator with an ATmega328 and an R2R resistor network, similar to Jesper Hansen's Mini DDS (Direct Digital Synthesis).

To make the function generation firmware run fast enough, I believe I have to wire an entire PORT (all of its 8 output pins) on the ATmega328 to the R2R resistor network. This way I can write one full byte to the port with a single command, like so:

On the ATmega328, I think PORT D is the only port I can use like that. ATmega328 pinout and port distribution is below. 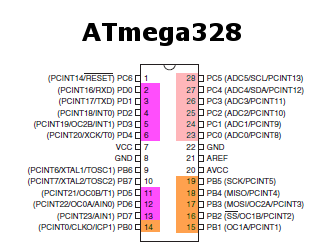 The problem I'm facing is that I also want to use the ATmega328 serial port for programming the board, but the serial port is also on PORT D (pins PD0 and PD1), thus creating a conflict.

After some research, I've decided that I could get away with the design below. The relevant part is circled in green. 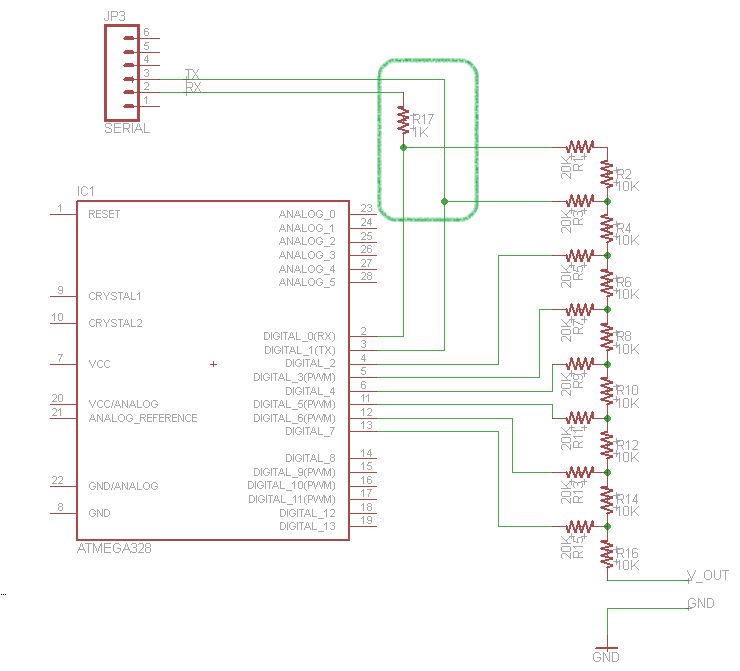 With that circuit I think I'll be able to use the serial pins for programming the board and also, but not at the same time, drive the R2R network to produce a sine wave.

The considerations I gathered so far, including contributions from comments, are the following:

I know there are a lot of ADC chips out there that would help me solve this problem easily and would make my miniDDS more precise, but I wanted to start out with these requirements.

I have answers for all your stated questions:

The first way would be to use a ICSP USB programmer to program the Atmega instead of serial programming, Arduino-style. This is more robust, faster, and avoids the problem entirely, and optimizes for BOM cost for the actual device (at the expense of requiring a few dollars of programmer hardware if you need to actually program it.) This can be implemented even on an Arduino board.

The second way is to run the Atmega328p on the internal RC oscillator, not using a crystal, and use port B instead of port D for the DDS output. This leaves the serial port entirely un-touched.

The third way is to write PORTB and PORTD one after the other, and use PORTB for the two bits that the serial port uses. This will generate a two-cycle glitch at about 4-8 Mhz. Given that you will need a low-pass filter anyway to generate any kind of smooth waveform, you simply need to lower the cut-off frequency of that filter to eliminate these glitches. To properly write the two ports in sequence, load the values into registers, disable interrupts, write the two ports, and re-enable interrupts.

Not the answer you're looking for? Browse other questions tagged serial atmega uart dds r2r or ask your own question.

4
Three UART connections to an ATMega328?
9
How can I fix an AVRdude not-in-sync error when programming Arduino via USB-to-serial cable?
0
Getting weird characters in hyper-terminal on serial connection of PC and Atmega-16
2
TriState Connection to Atmega328 and FT232R
7
Problems with homemade RS232-to-TTL converter board based on TI's MAX232
2
Why usb to serial port converter can’t program avr microcontroller?
1
How to program an ATMega328 using a Serial Port without using programmers such as USBasp
1
AVR Atmega164P UART / ISP programmer problem
0
Enable DTR/RESET by software with an ATMega328 MCU