How to add buzzer to alarm system

The LED is connected to 3 wires. The one wire is +3V, the other -3V and the last is ground.

My requirement is to add a buzzer to my alarm at the location of the LED using the power coming to the LED. The buzzer should beep once when I activate it, and beep twice when deactivated. I plan on removing the LED to accommodate the buzzer. If required to drive the buzzer, there is a 220V mains close to the LED.

So my question is how can I design a circuit to use the +-3V as a control signal to activate a buzzer as described above. Any help would be appreciated.

led voltage piezo-buzzer
Share
Improve this question
edited May 9 '14 at 8:24

As is true for a lot of projects on this site that use discrete logic, this could be done with a microcontroller instead with fewer parts, but that would also require the person building it to know how to program (which they may not), and to have the necessary development environment set up, including the hardware to program the microcontroller.

Looking at the table that was added to the OP, one can see that there are times when the system is either activated or not activated and both Wire 1 (GREEN_LED) and Wire 2 (RED_LED) have no voltage on them because they are flashing due to an open zone. So if we want to run the circuit off of just these two leads, this has to be accounted for.

Looking at the circuit below, I am ORing the two input leads using a pair of Schottky diodes, and feeding them into a Supercap to hold the voltage across the gap when no voltage is present. I chose a 0.4 F (Farad) capacitor, after using this Supercap calculator. The voltage following the diodes (Vcc) will be around 2.75v,. which is compatible with the HC (but not HCT) logic family. With no input on either Wire 1 or 2, and with the buzzer on consuming 30 mA, a 0.4F SuperCap will keep Vcc from dropping below 2.5v for 0.73 seconds (which provides a safety margin over the minimum 0.5 seconds needed). 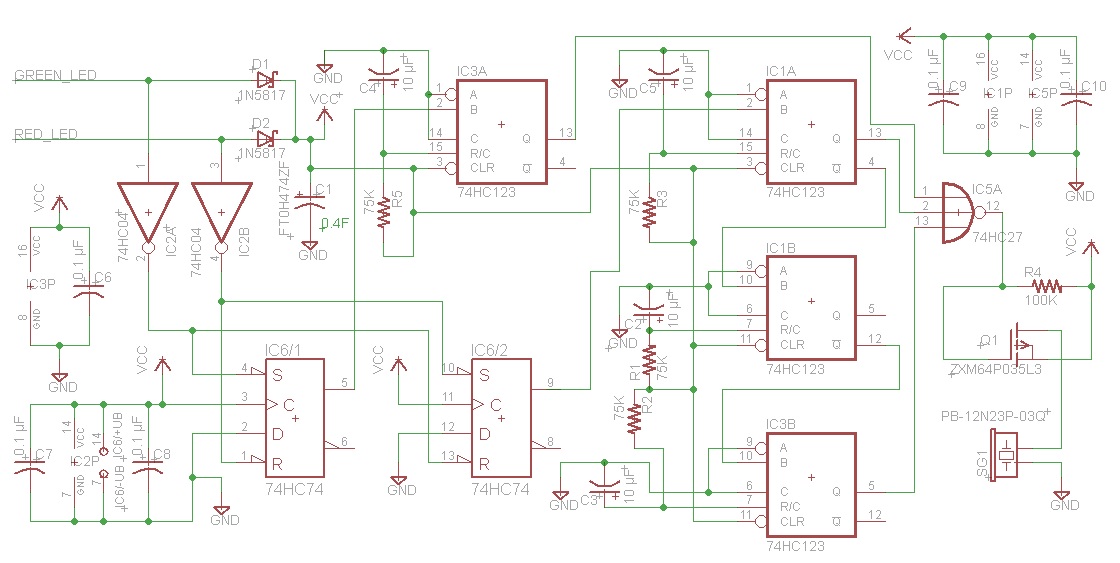 Here's how it works. There are four 74HC123 one-shot monostable multivibrators (IC1 & IC3) used for timing. All are set for 1/2 second delay using a 75K resistor and 10 µF cap. Typically one would trigger timer IC3A on just Wire 1 (GREEN_LED) going high, but since the lead may be flashing, this would cause it to trigger multiple times. So I am using a 74HC74 D-type flip-flop (IC6/1) to remember the state. When the flip-flop is set, the output is fed into the B input of the 74HC123. timer. When the B input goes high, it starts the timer. The output of the timer high feeds into one of the inputs of the 3-input NOR gate (IC5), making the output low, turning on the P-channel FET and sounding the buzzer.

After half a second, the timer expires and the buzzer turns off. Even if the Wire 1 (GREEN LED) goes to 0 and back again because it is flashing, the flip-flop won't change state and the timer will not trigger again.

Similar logic occurs when the state goes from activated to deactivated (Wire 2, RED LED goes high). Again a flip-flip is used to keep state. The difference is when the top right timer IC1A expires, the middle timer (IC1B) is triggered. It simply waits a half second with the buzzer off, and then the bottom timer (IC3B) is triggered, sounding the buzzer another half a second, altogether twice per the spec.

The logic could be simplified a little, but I presented it this way so it would be easier to understand. Instead of using the two inverters IC2A/IC2B, the two unused 3-input NOR's could have all three inputs tied together and function as an inverter. In that case the circuit could be realized using just four IC's.

Not the answer you're looking for? Browse other questions tagged led voltage piezo-buzzer or ask your own question.

13
Why is NAND gate preferred over NOR gate in industry?

3
Buzzer alarm problem
2
How to tell a piezo buzzer is broken?
2
Buzzer Driver Circuit
1
How to make active buzzer louder
2
How to add a LED to a Multimeter for use it with the buzzer in continuity testing?
0
Bypassing refrigerator door alarm piezoelectric buzzer
1
Need help designing LiFePO4 BMS disconnect alarm