How does frequency affect the ability to traverse objects in RF transmissions?

Or perhaps, what are the best bands/modulations to choose from if I need to efficiently transmit data in a path with heavy metal obstacles?

I need to build a number of devices to periodically transmit short bursts of data in a large storage facility full of metal containers (which are either empty or full of unknown contents). I've been performing tests with ZigBee transceivers (e.g. Atmel's ZigBit line) with various degrees of success. I've had very poor results in the 2.4 GHz bands and very acceptable results in the 900 MHz bands. However, I've been told by some people I've met that they've had the exact opposite experience (in their case, they were using 2.4GHz/900MHz XBee modules). I'm aware that 433 MHz is also a common band, and there's of course 5.8 GHz too.

So, the main part of the question is if there's some kind of chart or common knowledge about what frequencies are particularly good or bad for this kind of transmission. I'm interested in the bands I can use in small devices (e.g. phone sized) with battery power. A range of 50~100 meters/yards with obstacles would be very nice. Also, there should be some kind of chipset or module commercially available to deal with the RF part of the device (i.e., modulation, RF front end, clear-channel detection, preamble detection, etc.); I can deal with the higher level protocols myself.

Ideally, it would be a band for which I can use some kind of antenna that would not detune too easily if placed very close to a large metal object (1 inch/2.5 cm. from it). I've been testing mostly with whip and helical antennas. My devices must be placed very close to the metal surfaces it needs to overcome!

I cannot, however, count on: antenna directionality, device location/orientation, fixed transceiver locations, etc. All devices will be placed very randomly and scarcely. I just need to make the best I can. Only one thing I can count on is that the devices will stand always in vertical position.

The rule of thumb a lot of people use is that lower frequencies will have better "penetration" than higher frequencies. That's true in some cases, but not all. This is probably derived from calculating skin depth of materials. The skin depth is just how deeply into a material an electromagnetic wave of a particular frequency can penetrate. The equation used when the material is a good conductor is:

where ρ is the resistivity and μ is the permeability of the material. What you should notice though, is that as frequency (\$\omega\$) gets bigger, the skin depth gets shallower. Here's a practical example of what that means: your microwave shoots out radio waves at 2.4 GHz. If you put a giant thick steak in there, and we measure it's resistivity and permeability, we can calculate the maximum thickness of steak you can cook in your microwave. Anything deeper than the skin depth won't get cooked, because all of the energy of the microwave will have been absorbed already.

There are charts like you mentioned about how well different materials absorb radio waves, but they're not linear or predictable, so there isn't really a rule of thumb that's easy to apply. Here's how well every element in the period table absorbs photons (electromagnetic radiation). The energy on the Y axis is proportional to the frequency: 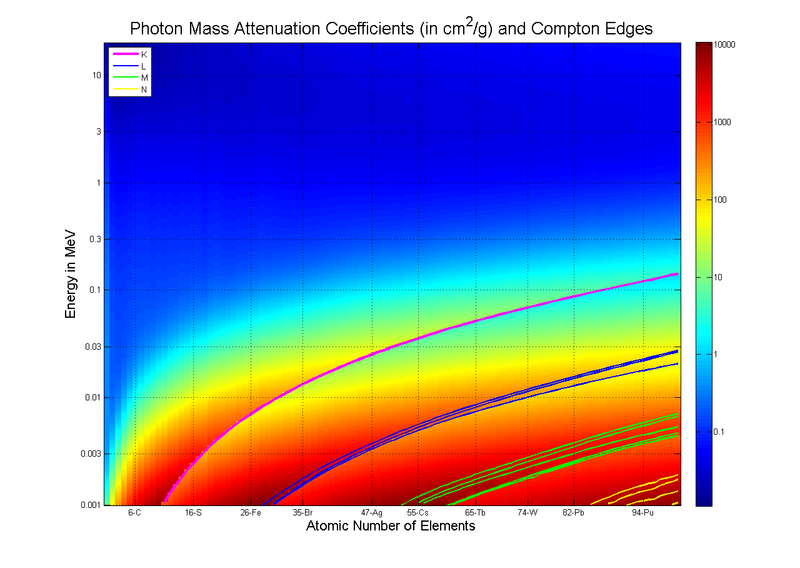 But this chart of Iron's absorption (according to different mechanisms) shows how things get messier when you zoom in: 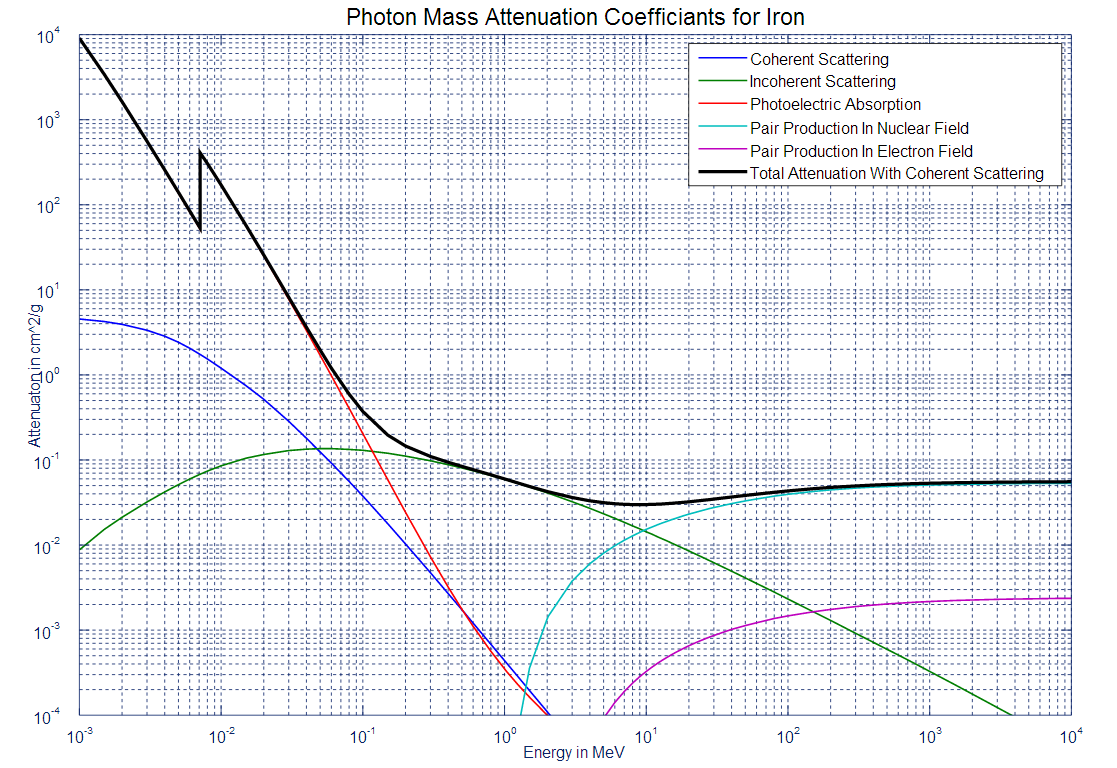 But in your application, there's another factor at play, which probably has a bigger effect. When your transmitter starts going in your big facility, it sends off an electromagnetic wave in all directions (assuming you're not using a directional antenna). Those waves will travel through the air until they encounter another medium, like the metal in the containers. When the wave hits that container, some of the energy is absorbed into the container, and some is reflected off the container. The part that's reflected will travel until it hits something else and then some will be absorbed and some will get reflected again. This is called multipath. Your receiving antenna might get a bunch of copies of the originally transmitted signal, all slightly time delayed. Here's an example of what it looks like when an analog TV is suffering from multipath problems: 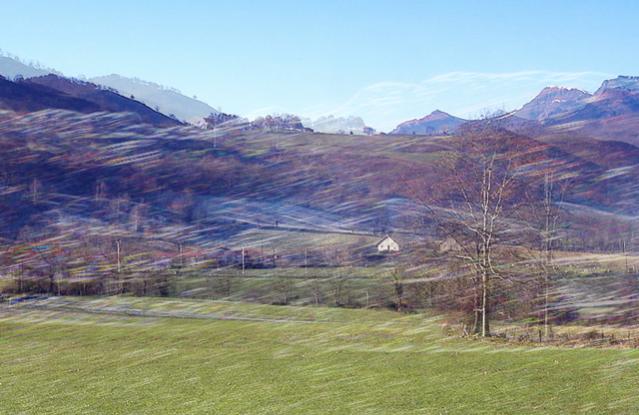 Because multipath effects can cause waves to destructively interfere with each other, that's probably why you're getting conflicting results. The position of the antenna and transmitter and containers will change the performance a lot, and if things are moving around in the facility, you may get a great signal one moment and then all of a sudden it will be terrible.

Dealing with multipath is hard, but here are a couple things you can try. Make the receive antenna directional, so it will hopefully have a low sensitivity to reflected signals. If you can get the antennas high up above the containers, that may help too. I would experiment with a 433 MHz transmitter (there are a bunch of companies that make modules) because I think you'll get better performance versus 2.4 GHz or 5.8 GHz.

Higher frequencies tend to refract more and respond more dramatically to sharp angles, as in knife edge propagation. This can be good sometimes, as it allows your signal to reach places it couldn't otherwise reach. You may need to modify your antenna once it is mounted, since the metal containers will affect the resonance of the antenna, but by modifying them to lower the swr after they are in place, you can counteract a lot of that. You don't want the emitted frequency to be too high or too low, or it will not respond well in a high metal environment. Somewhere in the area of 150-1000 MHz would probably work well.
To find the polarity of that antenna, you could connect it to a transmitter and listen to the transmitted signal on another radio at some distance. Try tilting the antenna on the receiving radio back and forth between vertically aligned and horizontally aligned. When the signal is strongest, that is the transmitting antenna's polarization. There can be up to a 90% drop in signal strength when the polarity of the two antennas are different.

Not the answer you're looking for? Browse other questions tagged rf xbee zigbee transceiver or ask your own question.

0
Wideband Passband RF filter
8
Low-power wireless module strategy
3
RF Design: A Bluetooth Repeater
2
How short can an RF transmission line be?
8
A poor man's alternative to a network analyzer for antenna matching
7
When and why did 5.8 GHz become an ISM band?
8
ISM band rules for spread-spectrum: how much do I need to spread?
0
How to decrease range of RF transceiver
2
How to observe the signals of a radio remote control using CubicSDR?
0
Can I use a 2.4 GHz rated parabolic MIMO antenna for 700 MHz Verizon 4G LTE data?