I am in the process of finalizing a switch matrix based testing scheme. I am in need of SPDT type switching elements. Two options that I came across:

Ofcourse, the relays are 6-8 times more expensive, but absolute price of components is not the limiting factor here. We are more concerned about low series resistance of the switch itself and avoiding cross-talk between elements.

What do you think would work best of the two options above. Any known ways to make CMOS switches cross-talk free are welcome.

Our analog voltage values that will be switched are in the range of 0-10V, and these are fed into high input impedance circuits, so current drive of the switch is not a concern.

Any help is greatly welcome.

switches relay cmos
Share
Improve this question
edited May 9 '14 at 16:53

The relays are the best in terms of signal quality. If you're going for state-of-the art performance, you may have no choice. You'll find them in many precision measuring instruments, including ones that I've designed, and including many (if not most) high-end bench instruments such as multimeters and function generators. There's just no comparison if you need the performance.

In between the two (relays and cheap analog switches) are more expensive high-quality analog switches that are more completely specified, such as ADGxxx. They are better protected, have much lower on-resistance and better specified leakage (1nA or better in many cases).

Analog switches suffer from relatively large maximum leakage (to power supply rails), more cross-talk between channels (unspecified maximum), feedthrough (off switch still transmits some signal ), relatively large series resistance that varies with voltage and temperature (and unit-to-unit). The variability with voltage means that there will also be distortion created that depends on the load resistance. The variability with temperature means that offset and gain will vary because of leakage current and load resistance, so even low frequency applications don't get off scott free.

So, look at the numbers. There are many, many circuits where the analog switch is good enough or more than good enough, and a few where you really cannot live with the many deficiencies.

If you don't mind the lack of protection against overvoltage, and the poor or missing "worst case" specifications (meaning no guarantees if you get 1uA leakage instead of the 100nA you're expecting), the 405x series of switches is really not all that bad with careful design, and you can get pretty good performance out of them. 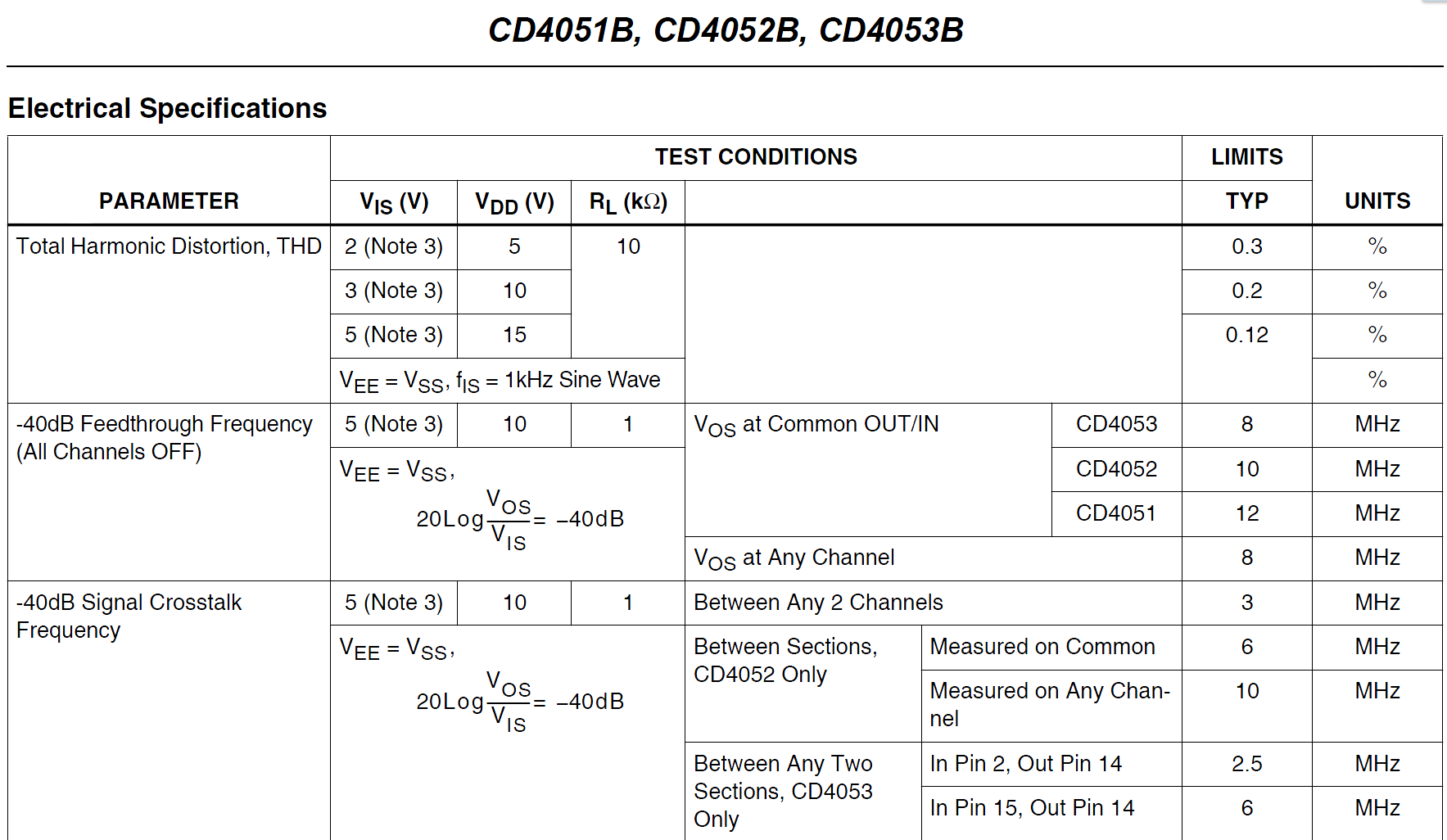 Reed relays obviously would give you perfect isolation and no "on" resistance, but as you said, they are way more expensive and also would take a lot more room since you can get three SPDT switches in each CD4053.

Since you are feeding the signals into high impedance inputs, I don't see any reason you can't use the CD4053's, since their "on" resistance is in the low to several hundred ohm range. I would still pick one that has the lowest on resistance, which happens to be Fairchild (of the three I looked at):

The datasheets don't appear to have a specific crosstalk figure, expressed for example in dB, but they do indicate the leakage from one channel to another is a few µA at most.

Not the answer you're looking for? Browse other questions tagged switches relay cmos or ask your own question.