I would like to do a small project where I could control an AC PLUGusing a digital signal. To do that, I would need to attach a TRIAC circuit into the AC plug. All it has inside is a fuse so this part is relatively easy. However, I am more interested and concerned about potential risks and limitations.

What are constraints to think about when interacting with AC (230V)?

What material wiring should be used? What thickness? Conductivity? Resistance?

Any other comments before I start?

As this sounds like a one-off project and you're new to the area I'd take a look at using a solid-state relay (SSR). They tend to give good physical and electrical isolation between the mains and logic side of things so you should find it easier and safer than running 230V AC on some form of prototype board.

Most electronics suppliers carry them and they can be bought cheaply off e-bay, although buying from a reputable distributor is probably worthwhile in this case to make sure that the safety approvals are genuine. The following is an example of what they look like: 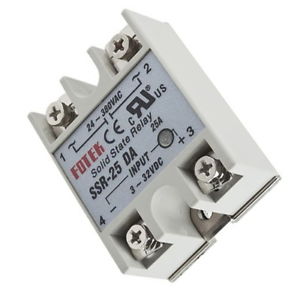 The creepage distance for mains voltages is actually fairly small and you can read more about in Creepage distance for PCBs handling line voltage AC? That will also prove useful if you go down the path of a TRIAC mounted on a PCB. You can probably intuitively imagine that to be the case because appliances like electric shavers don't tend to have a large clearance between the conductors.

The next consideration is the current you'd like to control, you've mentioned a fuse so I'd probably base your design on double the current rating for some extra safety margin. If you go down the SSR path that's as simple as choosing a mains cable rated for that current otherwise this question may give you a few ideas on how it applies in relation to a PCB.

Another thing that comes to mind is to think very carefully about how anything at mains level could come into contact with something it shouldn't. Make sure you use good and solid strain relief on cables and keep connections fairly short so they can't float around if they become detached. Also generally think about the things that could go wrong if someone pulls hard on a cable for example.

If you go down the path of a TRIAC I'd recommend an optically coupled TRIAC driver but even in the case of an SSR some additional isolation may be a good idea. For an SSR depending on the drive current that could be something fairly simple like a current limit resistor and zener diode.

This list isn't extensive but maybe give it all some thought and you can ask another question for review of a particular design before you go ahead and make it to error on the side of caution.

Not the answer you're looking for? Browse other questions tagged ac triac or ask your own question.