Is it possible to make a short-circuit detector for a battery power supply?

I have a basic understanding of electrical things myself, but semiconductors are not part of it. While pondering about some unrelated things, I came up with this question:

Suppose I want to make an electrical constructor toy for kids. There would be some lamps, switches, relays, magnets, wires, etc. And then there would also be a battery that powers it all (something like 9V or 3V, so no electrical danger exists).

Kids being kids, they will make lots of mistakes when building their circuits, and that's good - they learn. But short circuits can destroy the batteries pretty quickly, and possibly even heat something up enough to cause actual damage. It would be nice if that could be avoided, while still giving feedback that there is a short circuit.

So, is it possible to make such a "battery adapter", which would:

For bonus points, a yellow LED could light up when two power supplies are chained together, doubling the voltage of the circuit. This is can be used in some educational experiments (like seeing that a lamp suddenly lights up twice as bright), however it also shortens the lifespan of some circuit elements, so there should be a warning. However I do not know if this can be reliably detected from within the adapter itself (without some extremely fancy communications between adapters).

Is this plausible? Can anyone show me a schematic of such a device?

The following circuit uses an inexpensive current shunt monitor (AD8210) and a series of comparators to meet your requirements. I am using a separate 9V battery to power the test circuitry, so that even if the main battery gets completely shorted out, the test circuitry will still function. This also allows the test circuitry to work with a main battery ranging from 3V to 12V without requiring a buck-boost converter to generate the 5V needed. Instead I am using inexpensive 7805-type regulator in a TO-92 case, since the current drain is only a few tens of milliamps when one or more of the LEDs are on, and microamps otherwise. 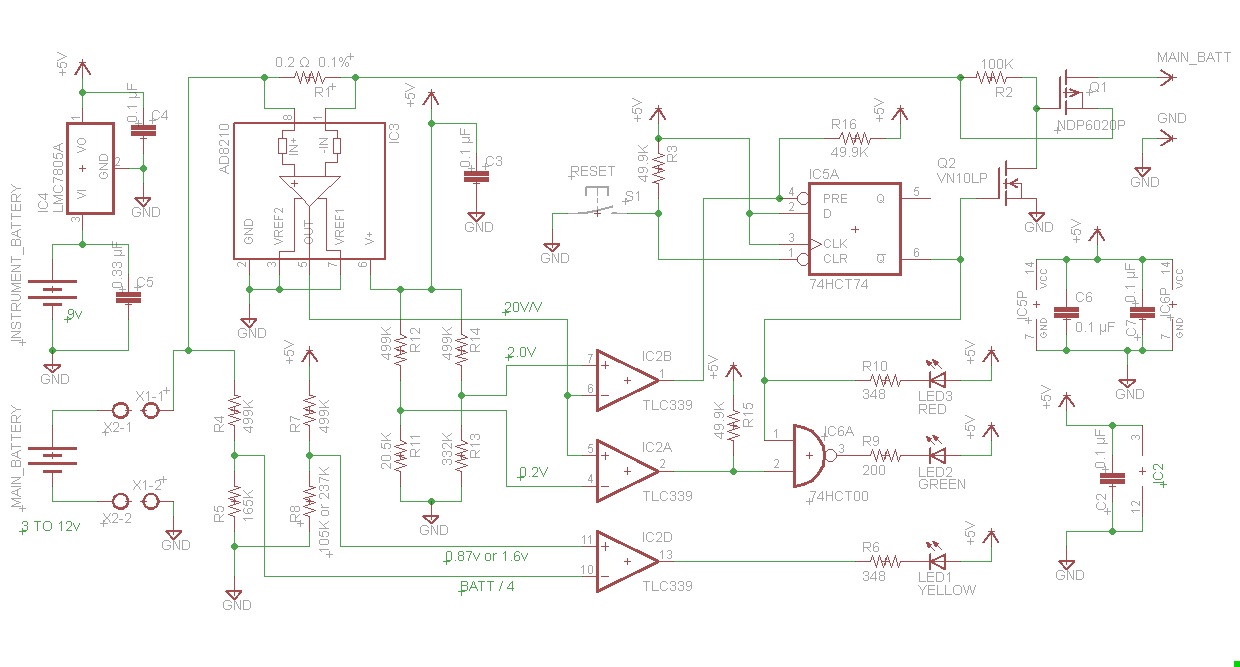 The 0.2 Ω shunt resistor R1 puts a minimal load on the circuit, dropping the battery voltage only 0.1V with a 500 mA load. The current shunt chip IC3 measures the voltage across the resistor, amplifies it with a gain of 20, and outputs a voltage proportional to the current on pin 5.

For example, that 100 mV drop across the resistor for the 500 mA load causes the IC to output a voltage of 2V. The proportion is 20 volts per volt across the shunt resistor, or 20V/V as I indicated on the diagram.

Likewise, a load of only 50 mA will result in a output voltage of 200 mV. So I set up the green LED to turn on for this threshold, namely 50 mA, indicating some activity. If you want it lower than that, you can of course adjust the value of the resistors R11/R12.

All of the comparator reference values are set with voltage dividers, using high value resistors to avoid loading the battery.

The comparator for the short condition IC2B is set up so it will trip with a load of 500 mA (2V). Obviously this is not a full short, but represents a lot of current. Again, you can adjust things as needed. With the current shunt resistor, you can only measure up to 1.25 A accurately. If you need to trip on a value higher than that, then you will want to switch the shunt resistor to 0.1 Ω and adjust all the voltage dividers accordingly. I picked 0.2 Ω so there would be enough voltage for the low-current measurement for the green LED.

Although I didn't show it, you could add a DPDT switch to turn both batteries on and off at the same time.

Obviously this could be done with a microcontroller, but you will still need much of the I/O circuitry: the shunt resistor and IC, two MOSFET's controlling power, three LEDs (and probably three more MOSFETs to drive them), plus the batteries and pushbutton. So not a lot is saved (three comparators, a NAND gate, flip-flop, and some resistors and caps). I believe a circuit like this demonstrates the solution better than showing a bunch of code (if that's even included in the answer). After all this is a EE site.

My first reaction is to do this more carefully than what others have suggested, especially since it seems you are intending this as a real product.

I'm thinking of a power supply module that you put a bunch of AA batteries into, which then provides reasonably regulated 5 V via a buck regulator. You may be able to find a off the shelf buck regulator chip that can also do current limiting, but I'd do this with a micrcontroller since you want a bunch of other features. The micro would be driving the buck switch from a PWM output, and firmware would provide the closed loop voltage control. The firmware would also be watching the current and doing the current limiting. Since it knows whether it is in voltage regulation or current limit mode, it is easy for the firmware to light a LED and drive a beeper during current limiting.

The micro would be regularly measuring the battery voltage, and provide a battery-low warning. I'd probably have a green LED dimly lit when the unit is turned on, and have it flash when the batteries get low.

One advantage of using a buck converter is that it would actually not draw excessive current from the batteries when the output is shorted. This unit would be quite robust, with little a kid can do to hurt it.

As for detecting multiply supplies chained together, that's not possible soley from inside one of the supplies.

The simplest solution is a single led that is on when there is no short circuit, and off when there is. To provide the current limiting, a single polyfuse or resettable PPTC would work. Unlike a regular fuse which blows and needs replacement, a PPTC sees the short circuit current, and starts to rise in resistance. Remove the short circuit, and it starts to cool down and resets to its normal low resistance state. Just size it for the typical current of your kit.

All the previous answers most certainly work and, very interestingly, each one shows a very different approach to this problem.

I'd like to suggest an other one that is

However, please note that I never built this circuit myself, and since I'm quite new to this electronics stuff, I may have got it completely wrong.

Now let's start with the meat of the circuit : 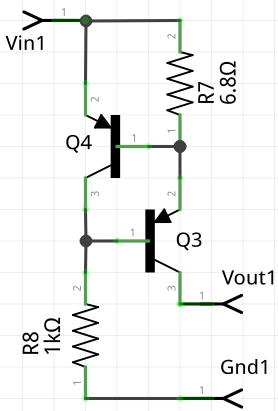 To understand how that thing works, first remember 2 things about transistors :

(This is for PNP transistors ; for NPN just replace "from" with "into" and "below" with "above".) 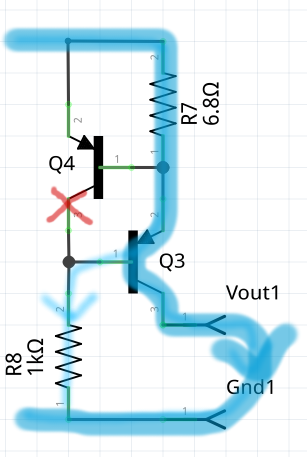 As long as the load (between Vout1 and Gnd1, not shown here) does not try to pull more than 100mA, R7 has less than 680mV across its terminals so Q4 is not biased enough : it is blocking. Then, R8 pulls current from Q3 base and therefore Q3 is turned on: the voltage between its collector and emitter is low and as much current as needed flows through it. 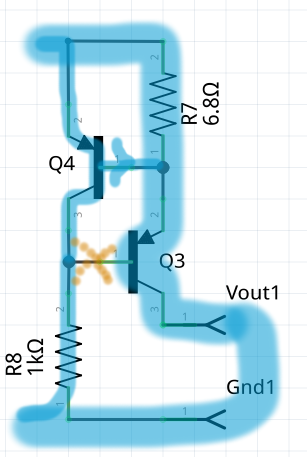 Now if the load tries to pull more than 100mA, the voltage across R7 gets high enough to bias Q4 so the excess current would flow from Q4 base instead. This turns Q4 on, and pulls Q3's base high so that Q3's base isn't biased anymore*. Now Q3 gets into its "blocking" regime, the voltage drop between its collector and emitter increases and that limits voltage to the load.

*in this case, the current through R8 comes from Q4, not Q3

Ultimately, this circuits adjusts the voltage between Vout and Gnd so that the load pulls no more current than whatever makes 0.7V across R7.

Here is the complete circuit, with the leds :

The red led : In case of a short, the voltage will increase across Q1 (from about nothing to almost the supply voltage) so the red led will light up. Otherwise, the voltage across Q1 will be much less than the led forward voltage (about 2V) : the led will be off.

The green led : This one will be always on. It is possible to get it to go off in case of a short, but this would add 2 transistors and I don't think it's useful

The yellow led : This one will be on as soon as the supply voltage is above the Zener voltage plus the forward voltage of the led (I'd say, about 2.5V).

Again, I'm not 100% sure that this would work so I'd welcome any comments on this stuff !

Not the answer you're looking for? Browse other questions tagged batteries safety short-circuit or ask your own question.