I am building an AC dimmer circuit to control from an Arduino using this schematic:

For this to work, you would have "bright" and "dim" switches at both control points, rather than having a pot somewhere to control the dimmer. (For bonus points, you could have rotary encoders at both locations, rather than switches. :-) )

Here's what a three way switch circuit looks like: - 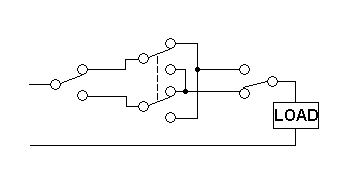 If you only need two locations then omit the more complicated DPDT in the centre: - 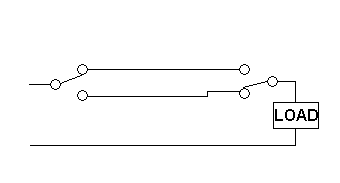 Should it be that you want the switches going to the MCU then please note that they enact the logical ex-or function.

6
Dimmer to bulb control
3
How can a light dimmer in series modulate a load?
0
Dimmer Switch For A NeoPixel Ring
5
Part identification in this dimmer switch
1
Arduino AC dimmer, with Wall switch control
0
What does a reverse phase dimmer circuit look like?
0
triac dimmer switch failure mode - flickering
0
How to make a variable light dimmer circuit without potentiometer?
1
AC PWM Dimmer with Arduino, but the light is on even when Arduino is off