Will doubling thinner wire in lieu of thicker wire work?

I've been needing a jumper cable for a while and have plenty of 10 AWG copper wire lying around. From what I've read, 6 AWG wire is recommended for jumper cables. I want to make a 7 foot cable.

So, I was wondering if it would be possible to use three (or more if needed) 7-foot pieces of 10 AWG wire, and use them instead of one 7-foot piece of 6 AWG wire? Would the 10 AWG x 3 cable be able to handle as many amperes as a single 6 AWG wire can?

Yes, keeping in mind that the rule is that an increment of 3 in AWG numbers represents a halving of the cross-sectional area of a wire. The current capacity is directly related to that area.

Yes, this is a common practice. With electric motors, for example, we often substitute 2 or 3 thinner parallel wires for 1 thicker wire. This allows us to fit the wire through thinner openings and thinner wire is often easier to bend.

The problem with light jumper cables is not typically the ampacity of the wire, it's the voltage drop due to the resistance. Two AWG 10 wires will handle similar current to a single AWG (110A vs. 101A) as can be seen from the table I've linked. The reason is that there is more surface area on two wires so they can shed the heat better.

That does not help your car to start because it means that the power that should be cranking your engine smartly is going into the wires and not the starter motor.

If you make the cable longer, you would want to keep the total loop resistance similar, so an even heavier gauge of wire is called for. It's not uncommon for 16' jumper cables to be AWG 4, but that works out to 6.3m\$\Omega\$, which is worse than your three strands of AWG 10 that are only 7' per side. 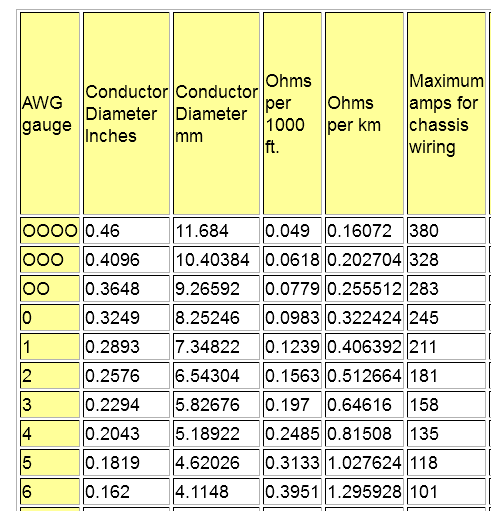 The question has been raised that perhaps the ratios of ampacity for chassis wiring do not represent the ratios of ampacity for free air, that they might somehow be completely different rather than roughly 2:1 for free air. I won't insert the relevant charts here, because to use them you have to refer to a lot of other charts and derate for various factors (and they are not conservative without derating), but to pick a single data point, continuous operation at 70°C rise (limited by insulation rating), the AW6 ampacity is 120A and AWG 10 is good for 60A, so just as I said. Derating for bundling the AWG 10s into triples or doubles is left as an exercise for the reader, since ampacity is really the wrong thing to be looking at, once we have established that it is more than adequate. Refer to FAA specification 43.13-1B for more information.

Not the answer you're looking for? Browse other questions tagged resistance wire or ask your own question.

3
What wire do I need to carry 30 A for 18"?
2
Increasing wire gauge by twisting pairs
2
Method and probes for measuring resistance of conductive braiding?
0
Make a wire thicker will work to avoid overheat?
1
Tapping into a 4 AWG wire
0
How can this 2xmolex -> pci 8pin be so terrible?
1
Joining high current wires outdoors
0
Calculating the voltage drop in a split-phase system
1
Fine wire for breakout board soldering that won't break
1
Difference in wire gauge for three phase and single phase domestic power supplies