I have been looking at some datasheets for standard LR20 batteries and found that they seem to have a higher capacity when you decrease the load. Here are two graphs taken from two different datasheets that illustrate what I mean. 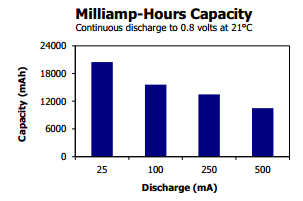 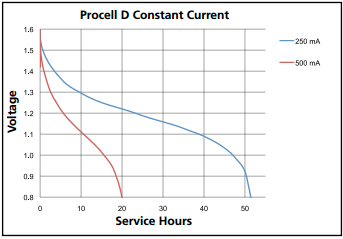 My thought is that by putting them in parallel I will decrease the load on each battery and therefore get more capacity out of each battery. Is there something I have missed or am I correct in assuming this will give me more battery capacity?

Yes, batteries give more usable energy at lower power than higher power. If you plotted a graph of energy vs power it would have a downward slope rather than flat horizontal line. By putting additional cells in parallel, you're reducing the power drawn per cell and will get more energy (more runtime) in practice. It would work the same way for adding more cells in series, except of course you'd change the battery's operating voltage range; your radio probably wouldn't work but if you were designing from scratch you could choose to run from that voltage if you wanted.

Since it doesn't seem you care about fitting 3 sets of cells into the stereo battery compartment (somehow they'll be connected externally), you'd simplify the issue by using larger cells of the same chemistry rather than more of them. For instance if the stereo took AA alkaline (LR6), you could wire in a holder for external alkaline D (LR20) cells instead.

Since you're already at LR20 and wouldn't find larger cells at retail, you might try running from a big lead-acid battery. 10 alkaline cells would run down from around 15V when full to maybe 8-10V when empty, so the radio can operate from an input range of at least 10-15V, and any other battery (or wall adapter) which is always within this voltage range and provides sufficient current capability should also be able to safely power the radio.

If changing from non-rechargeable to rechargeable battery, you'd have to obtain or design a charger for the battery, the safest thing being to charge it while disconnected from the radio. You'd also have to add a protection circuit which turns off the radio (or any load) once the battery reaches the minimum discharge voltage. If the battery gets over-discharged it could be be damaged to the point of never working again.

If your stereo is running for 12 hours on a set of batteries, you're probably getting about 8 A-h of capacity out of the set, so it's drawing about 660 mA on average. Putting three sets of batteries in parallel would drop the current in each set to about 220 mA, and you'll get something closer to 12 A-h from each set.

You are correct, but you need to be careful about how you connect the batteries. If you just wire them up, the strongest battery will attempt a very high current discharge into the weaker. This won't last long (assuming all the batteries have very nearly the same actual capacity and state of charge when you connect them), but it can conceivably make your life interesting for a few moments.

1
How to calculate battery capacity required for home applications?
6
Replacing 6 series AA alkaline batteries with NiMH batteries – how do I compare possible arrangements to optimise usable capacity?
0
Car battery capacity in colder countries
1
Calculate battery capacity from load
0
Finding the capacity of a battery with its discharge curve
0
Do I multiply charge current by number of battery packs when charging in parallel?
1
Calculating battery life considering the capacity drops depending on load current (2 x 4 AA-packs in parallel)
1
Capacity of two Batteries in series