I have been considering using Nitinol wire for some experimentation as a component in an autonomous system. My understanding is that it will return to its original, contracted state when it reaches ~70°C, which seems to be capable of some pretty neat applications by passing current across it. I assume that if I were to buy some, I should purchase the stuff with the thinnest diameter for maximum resistance in relatively short (<20cm) lengths.

So, for those of you who have been able to play with the stuff, is Nitinol the nerdy engineer-candy it appears to be?

However, I recently came across a device developed at the (late) Haptics Laboratory at McGill University called a "high strain shape memory allow actuator":

They consist of thin NiTi fibers woven in a counter-rotating helical pattern around supporting disks. This structure accomplishes a highly efficient transformation between force and displacement overcoming the main mechanical drawback of shape memory alloys, that of limited strain. They are as fast as the fibers are thin, while preserving the humph due to the many fibers in parallel. Because fibers can be made very thin indeed, they can twitch and relax in milliseconds. Various variable structure controllers were successful at controlling position, force and acceleration for vibration control. Thus we have high strain, high speed, high precision Shape Memory Actuators amazingly simple to build and to control.

I think the fact that it's an inch worm says something about the effectiveness of Nitinol, it's still pretty cool in my opinion

It's certainly used in medical applications for expanding stents in the body. 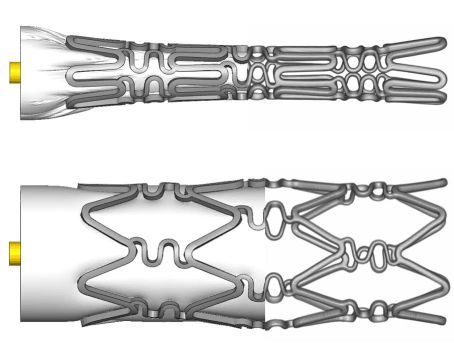 It's also used for coupling hydraulic tubes in military applications. However, it's not a lot of good for the use we normally, imagine, that of an actuator. For me, the killer is that I don't know of any applications that use Nitinol for repeated contractions under load. The problem is that it stretches over time, making it essentially useless.

Not the answer you're looking for? Browse other questions tagged robotics or ask your own question.