We recently purchased the estate of a 94-year-old gentleman who was an electronic genius.

He started building radios when he was 14 and was a ham operator and repairman of all types of electronics until the day he died.

We purchased the estate mostly for the ham radio equipment, he built some pretty impressive linear amps and customized his radios in a very high tech manner.

He was also a hoarder and since he also had lots of useful old stock electrical parts we purchased these as well. We are sure there are folks who could use these and we would hate to see them get thrown in the dump by the family.

This gentleman was very well organized and had most everything marked as to what it was, how it tested, and what it was for etc.

The piece I have in question is a large Sprague Vitamin Q Capacitor. I have tried to find anything like it, to compare it to but have found nothing. It is 15" tall and weighs around 20 pounds.

We want to resell this, but do not know what it is for or any of the specs. I have found a few sites that explain the numbering of these, but none that have the information on these particular numbers. We would like to get this in to the hands of either a collector or someone who could use it, so any information on the specs, and what it would be used in would be most appreciated. 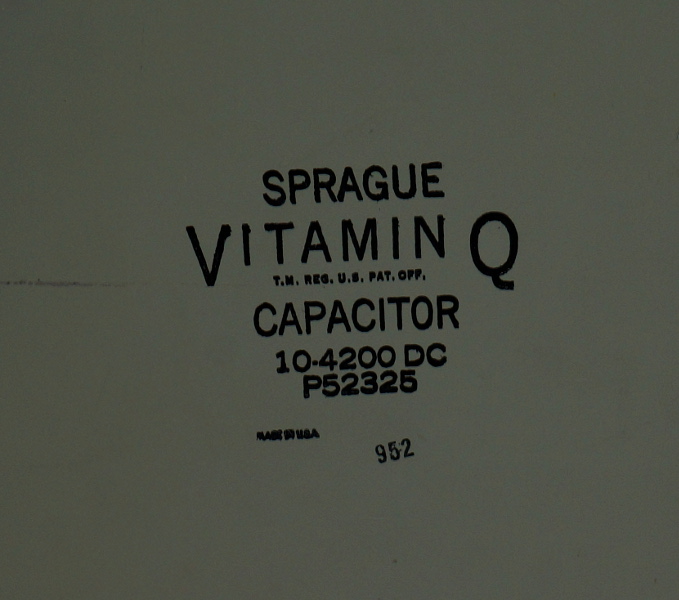 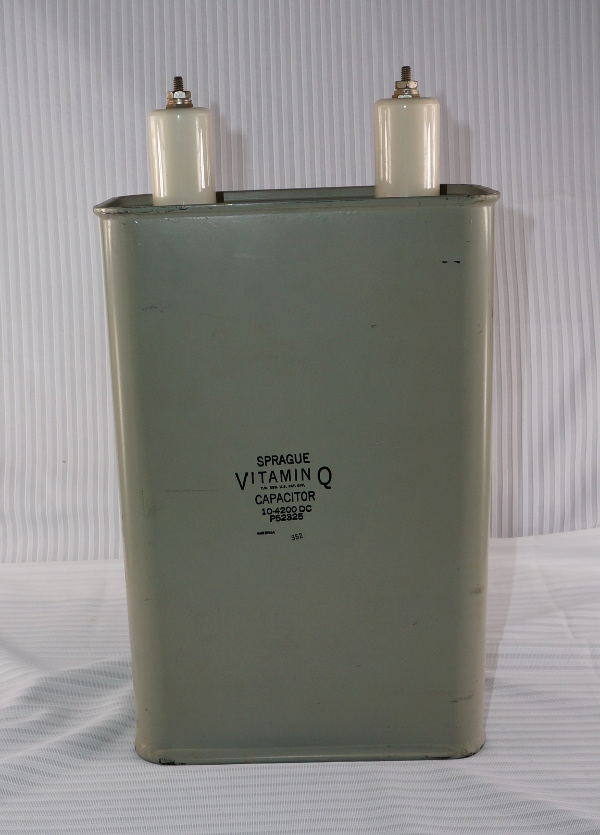 This post is a bit late, but...the Vitamin Q actually refers to the dielectric oil used. It's a refined paraffin oil. Sprague did use PCB oil, but that came later in their history. The part is hermetic so it's probably still good.

From the marking, it looks like 10 microfarad at 4200 volts, non-polarized.

Such a thing would be good for power factor correction on power lines. It might be used in a very specialized power supply, as very few things use voltages that high. Possibly something like a really high powered ( multi KW ) microwave oven circuit could use something like this. Maybe a rail gun or a radar transmitter. Anything requiring a very brief pulse of a lot of energy. Such a thing would be quite valuable to the right person, however any entity needing such a unique device is apt to be an aerospace entity and have the resources to procure one with all the paperwork.

Please be careful with that thing - as you can store a lethal amount of charge in it quite easily should you decide to charge it up on a TV flyback or similar. I would also make sure I had a piece of wire - raw telephone wire would be fine - across the terminals when stored to make very sure that thing does not have any residual charge. That capacitor could easily kill you if you were horsing around with it.

Yes.. it would be worth $190 to someone who was doing some high energy research.

Incidentally, this is written by yet another 60 year old engineer.

This is a 10 mfd, 4200 volt DC filter capacitor for a high powered radio transmitter. Watch out, it's pre-1979. More than likely this capacitor contains PCB dielectric oil, possession of which will get you a big fat fine from the EPA.

From yet another 60 year old broadcast engineer.

1
My inverter keeps flipping between battery/mains slowly at first, then faster. Why?
1
Help on unknown part
3
What is this cap-like part?
25
Normal capacitor vs. audio capacitor
0
Can I use a Microwave Capacitor as a Motor Start Capacitor?
14
Why are these two electrolytic capacitors so hugely different in size?
4
Are higher rated capacitors interchangeable with lower rated ones?
0
Use different capacitor for subwoofer