Resistance, and learning for beginners

I am building an electrified "fence" of sorts to keep slugs out of my raised garden beds. The "fence" consists of two 18ga galvanized steel wires, stapled to wood and connected to a 9V battery. The circuit is open until the slug touches both wires, at which point he completes the circuit and gets a little shock. This works great in small scale tests, but my garden bed as a circumference of 30' (9.1 meters) and I'm concerned that a little 9V battery will have a hard time working at full power over that distance of wire.

Because I don't really know how resistance works (I just know how to get my volt meter to measure resistance so that I can make sure my solders are done well) I'm not sure how to do the math to see what kind of a drop in voltage I'm going to get.

If someone can answer this question directly, great. But I'd also love a website that I can use to help learn about this stuff.

Bonus question: While 9V is a very light charge, if you imagine I'm building a much more powerful electric fence, what would I have to do to protect the battery if the circuit were completed for an extended period of time? (A slug dies on the line or something.) I wouldn't want some grass completing the circuit and having my battery explode.

The wire suggested wire is adequate- the resistance is about 130 ohms/km. I got that from kinda a long route. I used the table for copper (AWG) wire resistance per km, adjusted that for the ratio between copper and steel resistivity, and then for the ratio (squared) between the diameters for AWG and the gauge system used for steel wires (whew!) which is "Washburn & Moen; Roebling; or American Steel and Wire".

So only maybe 2.5 ohms for your circuit (based on two wires, 9.1m each, connected at one end.

You might want to use something other than wood for the supports, insulate the wire from the posts, or at least seal the wood with epoxy. If, say, you were in Portland OR, it will (on average) rain 144 days per year and the leakage through the wet wood would tend to drain the battery.

Here are some insulators used on commercial electric fences. 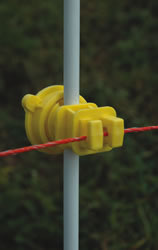 In terms of $ per kWh, AA batteries are a much better deal than 9V batteries, and six AA cells in series would give you 9V. Energy capacity being a lot higher, it also means that you won't need to replace the batteries as often. There is a good reason why 9V batteries are seldom found in modern electronics.

AA cells have a short-circuit current in the amperes, so a current limiting resistor as Andy suggests would be a very good idea, or you could use a blinking LED in series such as this Lumex one, available from distributors such as Digikey for $1 each. 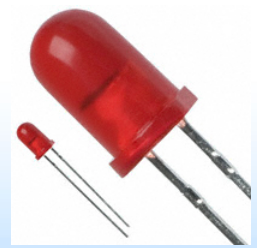 If you see the LED blinking, the wire is shorted.

18 gauge wire (assuming AWG) is about 21 ohms per kilometre - see this table for other gauges.

With 9.1 metres your total resistance is going to be 0.189 ohms and won't have a problem with the circuit you described. Resistance changes as wire heats up but on your circuit there'll be no heating up and I'd employ a current limit resistor in series with the battery to make sure - probably 1 kohm is large enough to prevent rapid discharge of the battery should a short occur but no so large as to prevent the little garden friends receiving a tingle or two.

Resistance is a physical property of the wire. It doesn't change with the voltage or current, however it does determine how the current will change relative to the voltage.

Since the resistance of the wire is so low, you won't really have an issue with the 9V supply. However it will be a good idea to put a resistor in line with the 9v battery just so that if something causes a short (like if it rains) then there will be a current limiting mechanism in place.

4
Overcoming a wire's internal resistance?
5
Unexpected resistance on breadboard
2
How to calculate the resistance measured between probes in water
2
Right kind of resistance wire for near-skin heater?
1
ways to control resistance by microcontroller
0
How many amperes without resistance?
1
How to solder resistance wire?
0
Fundamental Questions about Voltage and Resistance