Why is KCL giving me the wrong solution?

I'm trying to derive the gain of the following common base amplifier circuit: 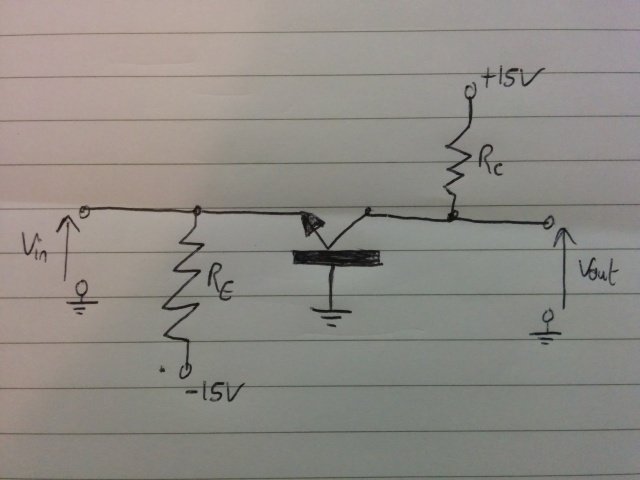 To do this, I drew the equivalent T-model circuit: 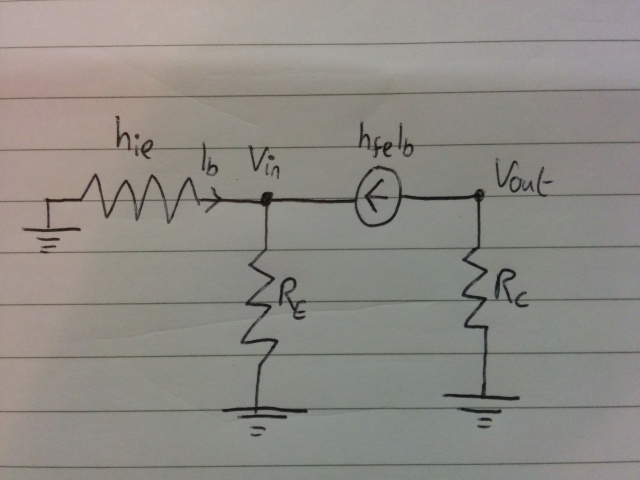 Why doesn't KCL give the correct answer in this case? I suspect it is something to do with the current source, but I don't know exactly what and it's been baffling me for ages :/.

Why doesn't KCL give the correct answer in this case?

Your equivalent circuit is incomplete since \$v_{in}\$ is, in fact, a voltage source.

The 2nd solution you provide follows from the above while the 1st solution does not.

Remember, the input must be driven for there to be an output.

By leaving the input open, the only possible value for \$v_{in}\$ is zero.

You are not really changing any of the signal being supplied to the circuit, in other words, there's no input signal at all, so vin = 0, and it doesn't matter what the gain is, output's gonna be zero as well,

to solve this circuit you need to consider the early effect and add a resistor parallel to the current source, that'll help balance the currents at the vin node,

I believe you might have made a mistake using the T-model. Notice how Vin is between the two resistors but definitely not connected to the same node as the current source. Hope this helps.

Not the answer you're looking for? Browse other questions tagged amplifier bjt common-base or ask your own question.

0
Amplification of signal in a circuit. Is my calculation ok?
0
Calculating gain, input and output resistances of a current amplifier circuit
3
Diode-connected transistor, small-signal, Norton, Thevenin
3
Inconsistency in the calculation of the gain of an emitter follower
5
How much can BJT parameters (particularly beta) vary for Monte Carlo analysis
0
How can I calculate the input resistance of this BJT Differential Amplifier circuit
1
Solving Unkonw R1 and R2 in classic descrete BJT bais arangment
0
Derivation of the transfer function of a instrumentation amplifier
4
finding the output resistance of bjt folded cascode