How are positive and negative feedback of opamps so different? How to analyse a circuit where both are present?

Whoever answers both at the same time in a coherent manner wins a pot of votes. 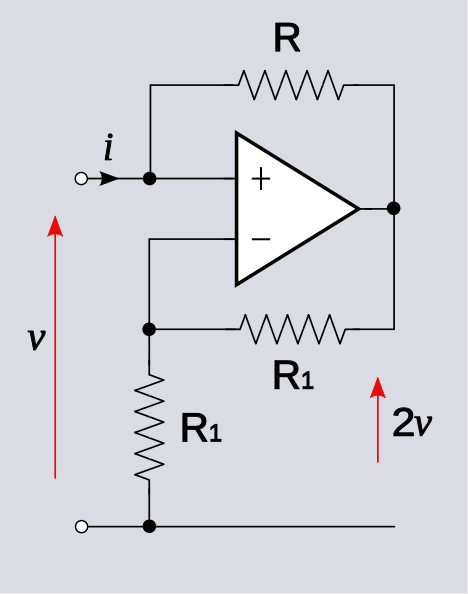 The output is finite in case1 and so net feedback is negative in these conditions (\$R_s < R\$). But at \$R_s = R\$, negative feedback fails to dominate.

\$\mathrm{\underline{Application:}}\$
Case1 is the normal working of this circuit but it is not used as an amplifier with gain 2. If we connect this circuit as a load to any circuit, this circuit can act as a negative load (releases power instead of absorbing).

How does the opamp change its behaviour depending on the feedback?

The ideal opamp behaviour itself is unchanged; it is the circuit's behaviour that is different.

Isn't it something in the lines of the voltage added increases the error instead of reducing it in the case of + feedback?]

How can we analyse circuits where both are present?

This is a good thing because we expect that this is a non-inverting amplifier and indeed, we get a positive voltage gain. Interestingly, the input resistance is negative: \$\frac{v}{i} = -R\$.

However, if we add an additional resistor \$R_S\$ in series with the input, we can run into trouble.

In that case, the equation for the non-inverting input voltage becomes

Note that when \$R_S < R\$, the voltage gain is positive as expected from a non-inverting amplifier.

However, when \$R_S > R\$, the voltage gain is negative for a non-inverting amplifier which is a red flag that something is wrong with our assumptions.

The wrong assumption is that there is negative feedback present and it was that assumption which licensed us to set the non-inverting and inverting input voltages equal in the analysis.

Is this method of picking up on red flags always valid to determine the limit between net positive and negative feedback?

What I did, in this case, was to make an assumption, solve the circuit under that assumption, and check the solution for consistency with the assumption. This is a generally valid technique.

The assumption was, in this case, that net negative feedback is present which implies that the op-amp input terminal voltages are equal.

When we solved the circuit in the 2nd case, we found that the net negative feedback assumption is valid only when \$R_S \lt R\$. If \$R_S \ge R\$, there is no or positive feedback and, thus, no reason to constrain the input terminal voltages to be equal.

Now, it may not be clear why there is positive feedback when \$R_S \gt R\$. Recall the setup for deriving the negative feedback equation:

Here, we subtract a scaled version of the output voltage from the input voltage and feed this difference \$V_{in} - \beta V_{out}\$ to the input of the amplifier.

Clearly, this assumes \$\beta\$ is positive in order that there be a difference between the input and scaled output voltages.

The well known result is

and, in the limit of infinite gain \$A \rightarrow \infty\$

Comparing this equation with the result for the 2nd case above, see that

from which it immediately follows that we have net negative feedback only when \$R_S \lt R\$.

There is some discussion in the comments about the conclusion for case 3, \$R_S > R\$, in the accepted answer. Indeed, the analysis for case 3 is not correct.

As shown above, if we assume the op-amp input terminal voltages are equal, we find a solution where

And, in fact, one can verify that this is a solution where the op-amp input terminal voltages are equal

However, if we perturb the output slightly

The voltage across the op-amp input is perturbed to

which is in the same 'direction' as the disturbance. Thus, this is not a stable solution since the system will 'run away' from the solution if disturbed.

and find that the op-amp input voltage is perturbed to

This is in the opposite direction as the disturbance. Thus, this is a stable solution since the system will 'run back' to the solution if disturbed.

It's still useful to analyse this as a linear situation where you can assume that -Vin always equals +Vin. I'm going to redraw to show the input voltage going through a resistor because as the OP has shown it in his diagram "v" could be assumed to be a voltage source and therefore the effect of "R" is of no consequence: -

Sanity check - in the normal case when R2 is infinite the equation boils down to: -

Clearly we approach a "problem" (i.e. infinite gain) when the denominator heads towards zero and this happens when: -

So hopefully this makes sense. Normally, for linear operations the circuit gain is dependant on all four resistors but, if the ratios of the resistors are as above, the gain is infinite.

Because the question was: How to analyze? Here comes a way to analyze such a circuit which is relatively quick and easy:

From the classical feedback formula (H. Black) we know that for an idealized opamp with infinite open-loop gain the closed-loop gain is simply (see the circuit diagram with four resistors in one of the answers):

Both functions can be easily derived from the circuit:

Hence, the result is

It is worth mentioning that the advantage of the circuit is the following: We can select a desired stability margin and/or use non-compensated opamps for lower gain values (data sheet: stable for gain>Acl, min only).

Justification: From the expressions above one can derive that it is possible to match the feedback factor to the corresponding open-loop gain (for a certain stability margin) - without restrictions to the closed-loop gain value. One can regard this method as a special kind of "external frequency compensation".

With other words: I can choose less feedback (good for stability) and - at the same time - a small value for closed-loop gain Acl.

I joined this forum yesterday, after I came across your interesting discussion in Google.

Your thoughts are wonderful and I fully support them. My point is just that they are based more on a detailed and sometimes formal analysis of the INIC circuit (what it does) than on the disclosure of its philosophy (why it does this). So I will try to roughly fill that gap with my comment.

Negative load. Beginning from the early 90's, I spent a lot of effort to reveal and explain in an easy and intuitive way the first perspective. If you are interested and patient enough, you can familiarize yourself with the resources I created in Web; I described them in detail in two questions asked by me in ResearchGate - What is negative impedance? and What is the basic idea behind the negative impedance converter? For those who do not have patience to read all of this, here is a very brief explanation.

The circuit behaves as an active load (dynamic voltage source with internal resistance R) that reverses the current through the resistor R (in the original Wikipedia picture) and "pushes" it back to the input source. In this way, it converts the resistor R (originally consuming a current) into a negative "resistor" -R (producing a current). It does this by opposing (through the resistor) a reverse and higher (2V) voltage to the input voltage (V). This is the output voltage of the operational amplifier and it is not used here... but still the circuit has an output... and, although it sounds strange, it is its input! Simply the circuit behaves like a source that attacks back the input source...

Amplifier with mixed feedback. According to me, this is the subject of the question asked here. As described in the comments above, this circuit is an amplifier with negative feedback, which is partially neutralized by a weaker positive feedback. But what is the point of that?

In general, the positive feedback increases the gain of the imperfect amplifiers and it is used in the past (remember the Armstrong's regenerative idea). But in our case, the op-amp has a huge gain and this is not necessary. Then what is the point of using a positive feedback here?

My speculation is that we can use it to decrease the ratio R3/R4 (in the second figure) in the case of INIC or R2/R1, in the case of VNIC (when the input voltage is applied to the inverting input). As a result, the resistors R2 and R3 can be low resistive.

In this amp application, the op-amp output is the circuit output. But as above, this amplifier has another output... and this is its input... so the circuit can act as an exotic 1-port amplifier...

@supercat, your comment awakened my desire (deliberately suppressed by me) to think about these diabolical circuits:) Maybe you will not believe me, but I have been thinking on them from the early 90s... and I still continue thinking... Now I want to explain what is the meaning of the fact that this circuit (INIC) reverts the current direction and passes the current back through the resistor. We can observe three situations:

Ideal voltage source (Ri = 0) connected to INIC. There is no benefit from this arrangement, it simply passes a reverse current through the input source (really, if it is a rechargable battery, it will be charged).

Real voltage source (having some Ri) connected to INIC. The circuit passes a reverse current through the input source, creates a voltage drop across its Ri in addition to its internal voltage, and thus raises its external voltage. 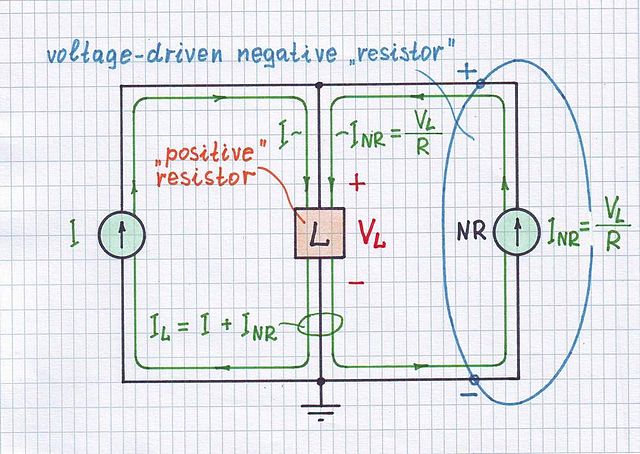 2
Why is a gyrator negative feedback?
3
Why isn't IC1 a comparator?
0
Want to know more about this op-amp configuration
-2
Confusion in identifying positive/negative feedback of opamp for a given circuit
2
How can I analyze an op-amp based negative impedance converter in a circuit?
0
How does feedback factor works in equation V-/Vout
1
Finding Differential Equation in RC Circuit with op-amp
1
Why does a Schmitt trigger work in saturation region?
1
How to calculate op-amp circuit when there are two feedbacks?