Update: This question is already so long, I'm hesitant to add to it but it occurs to me to ask if electrical interference between the stepper motor wires could cause this sort of behavior (motor oscillating, freezing, turning wrong direction for a moment)? The wires, standard ribbon cable, snake through the plotter "H" frame in cable carriers and are not shielded in any way. The failure is intermittent and only of the "far" (from the power source) motor) is failing.

I don't have the mad electrical engineering skills to accurately diagnose a subtle interference problem. Is there some brute force shielding "band-aid" I can try?

Background: I've built a 6' x 6' 'H' style plotter as a drawing machine (video of test run). It has 2 stepper motors controlling the Y axis and 1 stepper for the X axis (the "bar" in the "H"), layout below. The Y axis motors branch from the Y axis stepper driver and the wiring on the "far" motor is reversed so that the motors move the carriage in the same direction. There is also a smaller stepper for the Z axis, which is powered but not used yet.

I am using matched stepper motors for the X and Y axes (specs below). They are rated at 5v 1A. I am controlling this whole thing using an Arduino and a grbl shield. The grbl shield uses TI DRV8818 stepper drivers which are rated at 2.5A. I was powering the motors first with a 24v 3A max bench power supply and today tried a 12v 20A power supply. I have a small fan to cool the board.

Problem: The "far" (from the power source) Y axis stepper is intermittently failing. When the problem occurs it stutters (as though it were wired incorrectly) or doesn't turn at all.

I realize that it is hard to diagnose a problem like this from what I have provided but maybe there is something I can test? Here is what I have done so far:

What I don't get and am really stumped by is why only one of the Y axis motors is failing? The "near" motor works fine. If my power supply was inadequate or the stepper drivers were in thermal shutdown, both motors should fail.

Long-winded question, I realize, but I have tried to provide as much detail as possible. I don't know what else I can try to diagnose the problem. 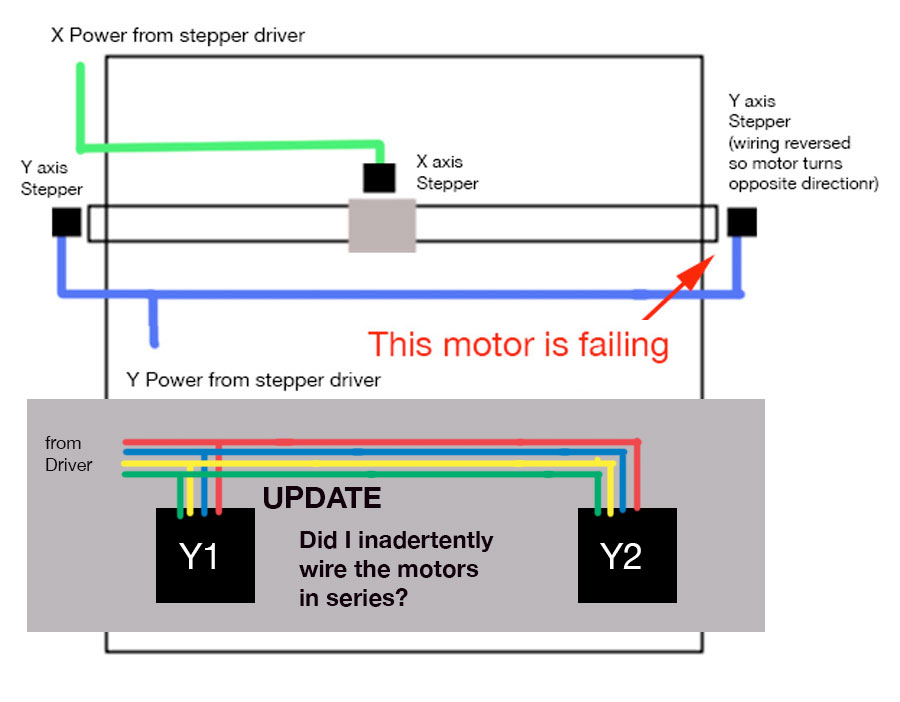 Interference is unlikely to disrupt a signal powerful enough to drive a stepper, but the resistance of normal ribbon cable is a likely problem. On the other hand, interference from the motor cable could disrupt other circuitry nearby, so some shielding might be called for.

Two experiments:
(1) run both steppers off short cables; they will probably work fine. (If not, give the "far" one its own driver amplifier)

(2) Run thick wire (cross section at least 1mm^2) to the far stepper motor to reduce the resistance in series with the motor. There's not a lot you can do about the extra inductance of the longer cable, but at low speed it's not likely to be such an important factor. This should give reliable operation up to a certain speed; but you may have to reduce the rate on this axis a little compared with the other axes.

You may have an intermittent connection in the wiring to the far motor. This might be a cold solder joint, or a pinched wire with the insulation holding the two ends more or less together. I don't know how you did your wiring, so I can't say more, except that this sort of thing can be a stone b***h to find.

Not the answer you're looking for? Browse other questions tagged stepper-motor electromagnetism interference cnc or ask your own question.