I am a bit confused. I want to buy a miniature solar panel like this. The problem is that all the miniature solar panels online in their specifications they give the peak voltage and peak current. Thats fine but I dont understand in which irradiance does the panel give those values. This is my first question.

My second question is why there is no datasheet? I guess that depending on the type of panel (for example polycrystaline) the I-V curves are same for every panel. Am I right?

And when giving the dimensions they give the device's dimension, how can we know the total panel area to calculate how much power it will produce?

I dont understand in which irradiance does the panel give those values. This is my first question.

Not too hard to calculate from the data provided, given a few assumptions. The "peak voltage" they give is less than the open circuit voltage, so ostensibly they mean to specify the peak voltage and current at the maximum power point. The "mp" after "Imp" and "Vmp" would also conventionally indicate "maximum power". So they are saying this panel can produce (under optimal conditions):

The area of the panel is:

They claim an efficiency of 15%, so the irradiance \$I\$ must have been:

Irradiance on a very clear day at Earth's surface with the sun directly overhead is on the order of 1kW per square meter, so this sounds reasonable enough, considering that the efficiency number may not account for the fact that this device has some margins around the panels.

My second question is why there is no datasheet? I guess that depending on the type of panel (for example polycrystaline) the I-V curves are same for every panel. Am I right?

Some products just suck. That said, silicon junction photovoltaics pretty much have a common shape to their I-V curves, which is more or less a top-for-bottom flip of the I-V curve of a silicon diode. A more expensive product would probably have more detailed specifications; for something cheap like this you will just have to infer or measure for yourself.

At the simplest level, a pv ("photovoltaic") can be considered a current source. The maximum current is dictated by the physical properties of the cell, and the amount of light striking the panel. The standard way to rate a panel's maximum current is to short-circuit the output (through a current meter), shine a predetermined amount of light on it, and measure the resultant current.

This current is called Isc, for short-circuit current.

Now, disconnect the output leads from any load. Under the same lighting conditions, measure the voltage at the output. This is called Voc, for open-circuit voltage.

You can't determine a pv panel's output power based on these figures, though, because they can't exist at the same time. When measuring Voc, for example, there is no current flowing. Conversely, there is no voltage possible over the short-circuit that was created to measure Isc. In either case, the power output is zero Watts.

But, say you place a small load across the output. The current through this load will be very similar to the short-circuit current, Isc. But now you have a non-zero voltage and a non-zero current, so you have actual power produced.

If you increase the load, the current still doesn't fall much. But with the increasing V (and the same I), your effective power is increasing. However, eventually your load will get to be big enough that the panel can no longer push current through it. When this happens, the current quickly falls to zero. This is shown by the blue line on this graph: 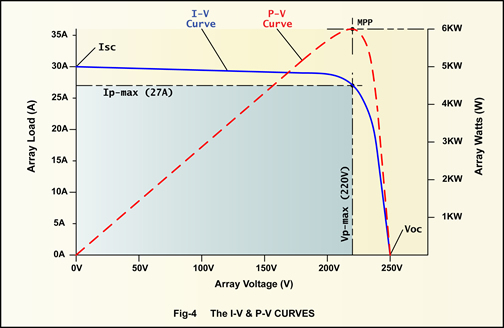 So, how does this help? As the load voltage increases, so does the power generated. There is a sweet spot, right as the current starts to decrease, where the panel is creating its maximum possible power. The red-dashed line was created by multiplying V and I. The peak is called the Maximum Power Point, or "MPP". At this point, you have two new measurements, Vmp and Imp.

If you look at the specifications in your link, you'll see that they actually are labeled ambiguously. They are calling Vmp the Peak Voltage, even though it is lower that the (correctly-labeled) Voc. Instead of "Peak Voltage", they mean "MPP Voltage".

The MPP varies with irradiance, and changes throughout the day. The panels will only produce their rated maximum power with a perfectly-tuned load, which obviously never happens. The solution is to get a charge controller with MPPT, or maximum power point tracking. These constantly vary the effective load and extract as much power as possible.

Now, here are your answers :)

1) The standard test conditions state that the solar irradiance should be 1000W per square meter. This is equivalent to a typical, clear-sky day at solar-noon. This is supposed to be representative - some locations can actually exceed this value.

2) Most companies do make a complete datasheet, including mechanical dimensions, etc. But the electrical specifications are generally only what is included in your link. PV curves are quite similar to each other, except in scale.

3) This is more complicated. Assuming you are planning to store the power, and use a charge controller with MPPT, you can look at the controller's efficiency (~90-94%) and plan accordingly. Then you have to consider how many hours of sun you get, how much storage to add, etc. Here is an answer I wrote for a different question, which should give you an idea of what you need.