I'm currently building a small, portable human-powered charger for supplying a 1W led. I salvaged a dynamo core from a torch, but I'm unable to use other components inside since the torch is only designed to power 3 70mW LEDs; the internal li-ion battery is only capable of outputting a fraction of a watt.

The problem is one of storage. I know the device is capable of outputting the energy I need; by shortening the crank used to power it and attaching the output to a LM2596 voltage regulator, I was able to output ~1A at 5V (measured via multimeter shunt resistor); this is well in excess of the 1W required to drive the LED. While this power output took a lot of effort (since the dynamo was almost shorted), 1W was fairly sustainable. However, I'd prefer some sort of short-term energy storage that I could use to drive it - that is, at least 10 seconds of full power, so a capacity of greater than 10J.

Possibilities are as follows:

-I have a 10F supercapacitor, but it's only 2.2V, which is too low to drive the LED. While I could get a step-up SMPS, I'm worried about energy losses, since I'm already using one to step the voltage down from the dynamo.

-I could use lithium ion batteries, and intend to (charging apparatus is easy enough to get, and I have the power output capabilities), but I would also like the torch to have a long lifetime; battery lifetime of these is around 3-5 years last time I checked, which I feel is too short. Also, I might want to scale up power production (for instance, leg power instead of arm), which would entail higher energy input which these batteries are incapable of - being limited to a maximum of 1C, so about 1A or less.

-Other possibilities include perhaps a flywheel, but I'm not sure about bulkiness and feasibility.

Main design considerations are efficiency and portability, while still being able to meet power requirements. 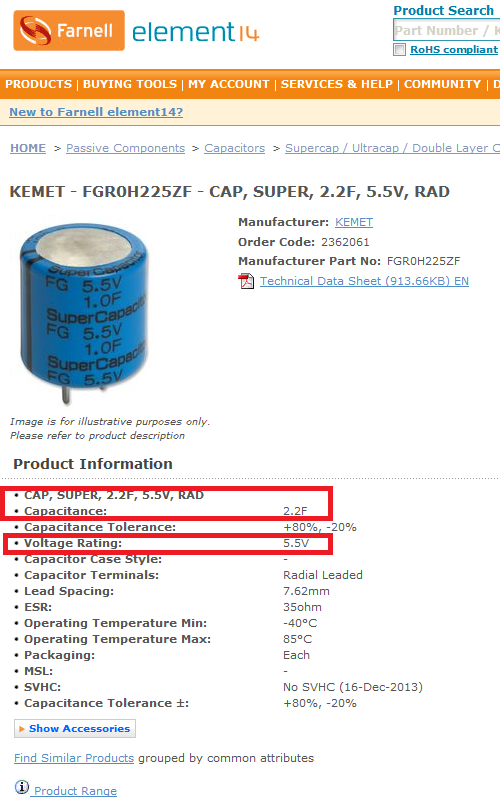 Clearly you'd need a lot of effort to get it charged up but I don't see why this would not work as a basic energy storage system. Once liberated of it's 10 joules (as per the question), the terminal voltage will be about 3.99 volts and hopefully sufficient to have powered the LEDs down to their limiting voltage but as the question doesn't contain this data I can't be sure.

Also, for the item shown above note that it has an ESR of 35 ohm and this may become a problem in utilizing the energy at a high rate because of volt-drop. For instance, a 1 watt output at 5 volts requires 200 mA and this current through 35 ohms is untenable with this device. You'd need to look for a much better device - something that is a couple of ohms maximum.

If this spec of supercap cannot be achieved then other means has to be found.

EDIT - following valiant work by @helloworld22, it looks like a suitable cap has been found. Here is the data sheet and note that it is on page 10 near the bottom - it is an EMHSR-0002C5-005R0 and it is a 2.5 farad, 5V device with an ESR less than 53 milli ohms. At 200 mA, the volt drop will be 11 mV and negligible and over ten seconds it will waste 21 milli joules to power the LEDs. Nice find!

Not the answer you're looking for? Browse other questions tagged led capacitor battery-charging generator lithium-ion or ask your own question.

26
Can I pedal power a laptop device while the device is being used?
1
Charging 2 Li-Ion Batteries via a single charger
2
Theory behind the “Joule Ringer” circuit
3
Multi-cell li-ion charger
0
Solar cell charging circuit
0
Boost converter confusion
4
Is it safe and efficient to charge a Li-Ion cell from mixed alkaline cells?
1
Creating a Li-on backup for a 12v router
0
Power green LED from microbial fuel cell (MFC)
2
LED diodes as both diode and load for boost converter