Wake On LAN to PMIC

I'm a connecting a WOL interrupt port of the PHY (an open drain port) to the ON-OFF port of the PMIC of my device. The idea is do a reset of the PMIC and then I'm going to turn on the MCU from a completly off state (not sleeping or any thing like that).

The PMIC ON-OFF pin is configured to detect levels, is always pulled up to a always +3V3 [V] so if the open drain is asserted, that would shutdown the PMIC. BUT according to the ethernet PHY, when an WOL (WakeOnLan) event occurs, a register in the PHY is gonna go to 1 and the only way to deassert the signal would be changing that register to 0 (its default state) trough I2C in the PHY, so like we don't have logic on all the time would be asserted that signal so the PMIC will continue off.

But I'm thinking that if a take to 0 the ON-OFF signal of the PMIC that will kill the power of the phy so the phy wound't be able to mantaing that open drain signal asserted and then the PMIC will turn on and the PHY will start in its default state (that register in 0).

What do you think about that? Please can give some feedback.

This warticle, where the path you need is called "monostable multivibrator", may be the starting point in your design (and knowledge) search, but if you have no time, the following at-a-glance solution would be useful: 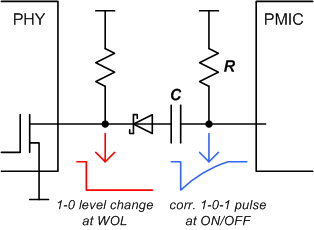 Not the answer you're looking for? Browse other questions tagged microcontroller ethernet phy or ask your own question.

4
How to route Gigabit Ethernet, remote PHY or remote RJ45 connector?
4
Looking for simple Ethernet (RJ-45) controlled on/off switch for low-voltage DC line
2
KSZ8863RLL and external PHY (KSZ8051RNL)
2
Problem with Ethernet PHY
1
USB3300 with TM4C129 MCU
0
Inverting REFCLOCK of Ethernet PHY
2
How can I configure PHY in cubeMX on own board?
0
Is Pull-up present by default?
2
Adding ethernet jack and transformer to device designed without one