So I have been looking at building a circuit for a water-powered motor that I have been trying to develop.

I plan on starting off with this battery. Then I will hook it up to this high voltage transformer.

After that, I need to do something in particular with it, I need the output to look sort of like AC in the sense that the current switches directions. Let me explain the purpose and the planned additions that I will need to make it happen.

I am trying a concept of a water cell where the water serves essentially as a dielectric in a capacitor. Don't worry about why or how, what makes it happen, but take for granted that I will need relatively high frequency and high voltage AC going through there, or DC pulsed. Now, the point is not to break down the water at this stage, so what I want is simply high voltage positive and negative pulses on the two plates of the "water capacitor" going back and forth as in AC current. I said that the point is not to break down the water, at least not at this stage: that means that current will not "break-through" the dielectric, but the pulses of the electric field, in the form of the potential, or high voltage will constantly change the electric charge of the plates (of the "water capacitor").

As such, I wanted to have a load present so that undue stress was not put on the high voltage transformer, causing it to no longer function properly, if at all. That load would be the resistor. I did a little extra so that it didn't burn up, and I allowed for the Ohms not to be too high, because I want the high voltage present for the pulses.

Now, there are a few things that bother me about the circuit so far. The high voltage transformer works sort of like an ignition coil from what I understand, but it builds up voltage until it can arc, and does arc. So I feel like that is a steady build-up, and that is ok, and it is not supposed to short to the input of the circuit, so that is even better, however, how would I get that switch of direction present in AC with the present set-up?

Water Capacitor(charging, uncharging cycle for each plate, but no breakdown)

That is it for the set-up. If anyone has improvements that they would like to suggest on my design so far or errors to point out (but please read until the end before you do), feel free to, as well as if anyone can find a high voltage transformer that can get like 3V with no minimum wattage and just milliamps to at least 20kV, that would be great. However, my real questions come now.

If you noticed, the high voltage transformer in the current set-up charges, but has no way of releasing as the water capacitor doesn't have a point where current flows through it, only the pressure build-up. So, I was thinking of a switch before the transformer, looking into different kinds, probably a transistor, because of the wear and speed and automatic factors in consideration. Problem: I don't have any idea how to make one work with a battery and need an automatic switch, preferably not using up a lot of power or requiring a ton of parts. I need help with this.

Also, to go with the switch, I was considering hooking up a normal capacitor after the water capacitor to gain power and, when the switch turns the transformer off, to allow for the flow of electricity to power the other plate of the water capacitor, switching the charge, and create the AC like effect. I have no idea if or how that would work. My thought process is that it will probably charge the second capacitor as well, because it won't be able to get anywhere with the first one. However, how would it charge the second capacitor and if it does, would it be charged with a high voltage low amperage combination or change things a bit to deal with it? Also, I was kind of wondering about the flyback voltage from the second capacitor discharge, and if I would need anything to stop it, outside of the first capacitor, which should absorb it, as the current has switched directions from the perspective of the water capacitor, and the resistor.

As such, this is my current picture of the circuit. 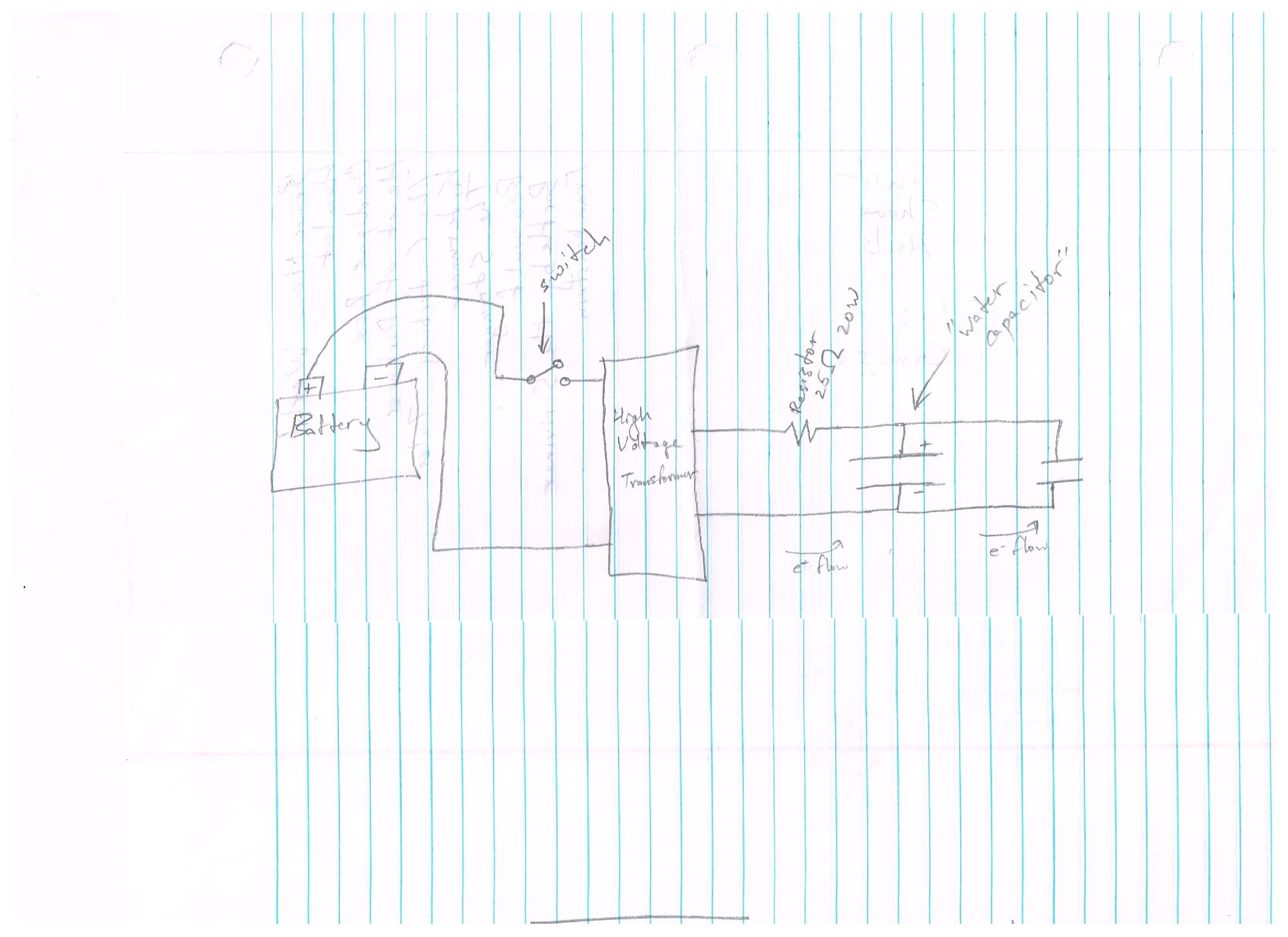 So, as you can see, I have a problem with the switch and with the secondary effect which is so crucial to creating a certain environment inside the water capacitor. Thank you for any help that anyone here can give. I still have much to learn, so please point out any mistakes and I welcome any safety concerns or tips that you might have to give. As I said, I have much to learn and am glad to learn it. Thank you again. I hope you all have a good day.

First, your HV unit is not a transformer. It is a high-voltage module. It puts out a pulsing high voltage.

So, the high voltage transformer was made to make arcs, and as such does not allow ... a no-load situation.

You are correct. Your capacitor will store charge and will destroy your module. Furthermore, you have taken the input power specification, (and it would be nice if you would share with us where you got the numbers) of 18 watts at 4.5 volts, and then calculated an output power of 18 watts/20 kv, giving .9 mA. This is wrong. Input power does not equal output power.

Work: Input voltage 1.5V ~ 3V can work for about 1 minute, the input voltage exceeds 3V continuous work does not allow more than 30 seconds

In other words, you will not be able to run your unit for more than 30 seconds at a time. And it doesn't say how long you need to let the unit recover from 30 seconds operation, either.

Having failed to understand your HV unit, you have equally failed to understand your water capacitor. To begin with, ultrapure water is does not have an infinite resistivity. It is, in fact, 18 Mohm-cm. For your described capacitor, this amounts to ~ 2 Mohm. At 20 kV, that will require 10 mA which you cannot provide. You mention a "coating on the plates" which you believe will prevent current flow, but you do not describe it, and I hope you will forgive my suspicion that it may not work as you plan.

You speak of your desire not to break down the dielectric (the water) and then talk about how pulsing or AC voltages will avoid this. You seem to be unaware that the breakdown potential for pure water is ~3 MV/m. Since the spacing for your capacitor is on the order of 12.5 mm, the breakdown voltage will be ~ 37 kV, or twice your voltage, and you have no need to worry.

Given the dielectric constant of water (80), the effective capacitance of your capacitor will be ~ 100 pF. Since your module has a diode in its output, you are correct in thinking that you will get just a DC output, since there is no major discharge path. You cannot discharge your capacitor from the input side. Any such discharge mechanism would have to be synchronized with the HV pulses, and would have to withstand 20 kV. Such a circuit will be neither simple nor cheap.

Your selection of series resistor is very strange. Your calculation for voltage drop make it clear that you have used the input figure of 4.5 amps, and this has absolutely no application to the output.

So, overall, I have no way give you advice, except to suggest that you do something else. I don't see any instance where you seem to actually understand how your proposed circuit would work, or why, and that is not a good starting point.

Not the answer you're looking for? Browse other questions tagged capacitor high-voltage or ask your own question.