The PWM signal is intended to control the speed of a motor. Only not in the way you would expect. The motor has its own circuitry and accepts the PWM signal as a speed control. So its not driving the motor directly.

I got a PIC to generate a PWM signal. I tried both the build-in ECCP module and software PWM. I used the following circuit to convert the PWM from 5V to 12V. 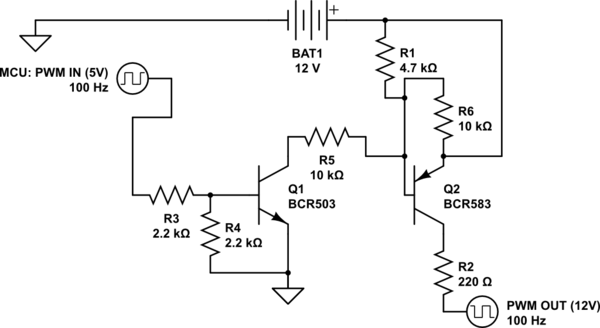 Although this produces a very nice 12V signal the motor doesn't react to it all.

So I tried an old fashion NE555 in astable mode to generate the PWM. 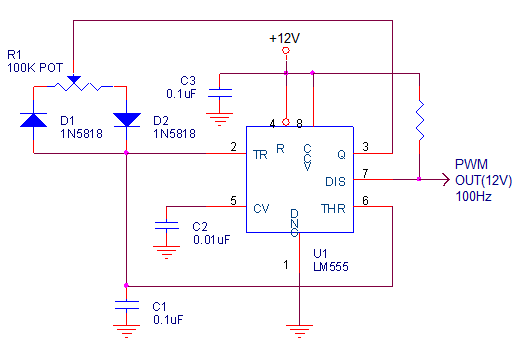 This circuit also puts out a nice 12V PWM signal with the same frequency and duty cycle as the PIC circuit. But this signal actually does have effect on the motor.

So my question is: What is the difference between the PWM signals generated by these two circuits/devices? By knowing this, I hope I can change the PIC circuit in such a way that motor reacts to it aswell .

Since I rather control the motor with the PIC, as this will make for a more compact end result.

ADDITIONAL INFO: Both signals when connected to the motor. 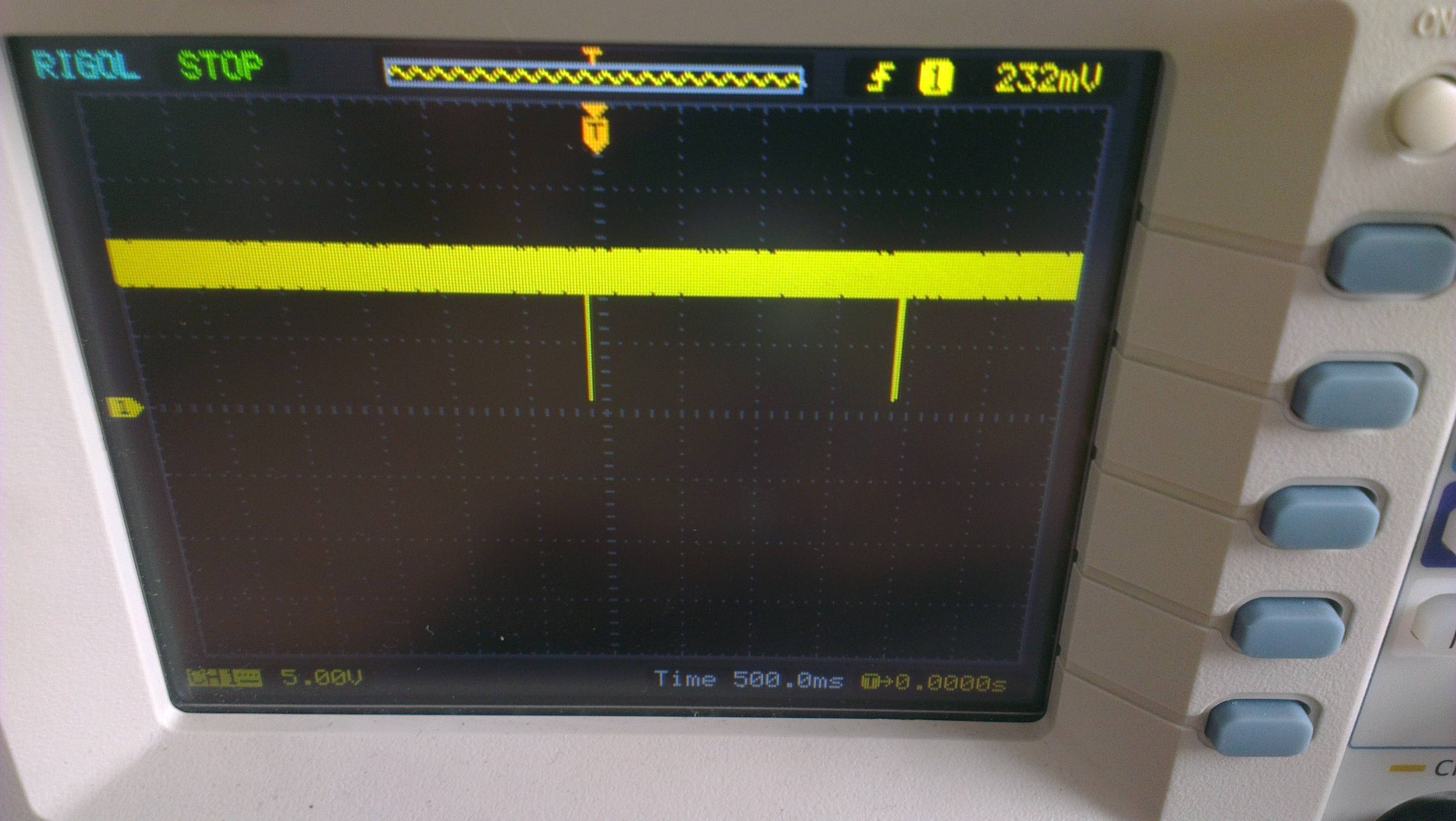 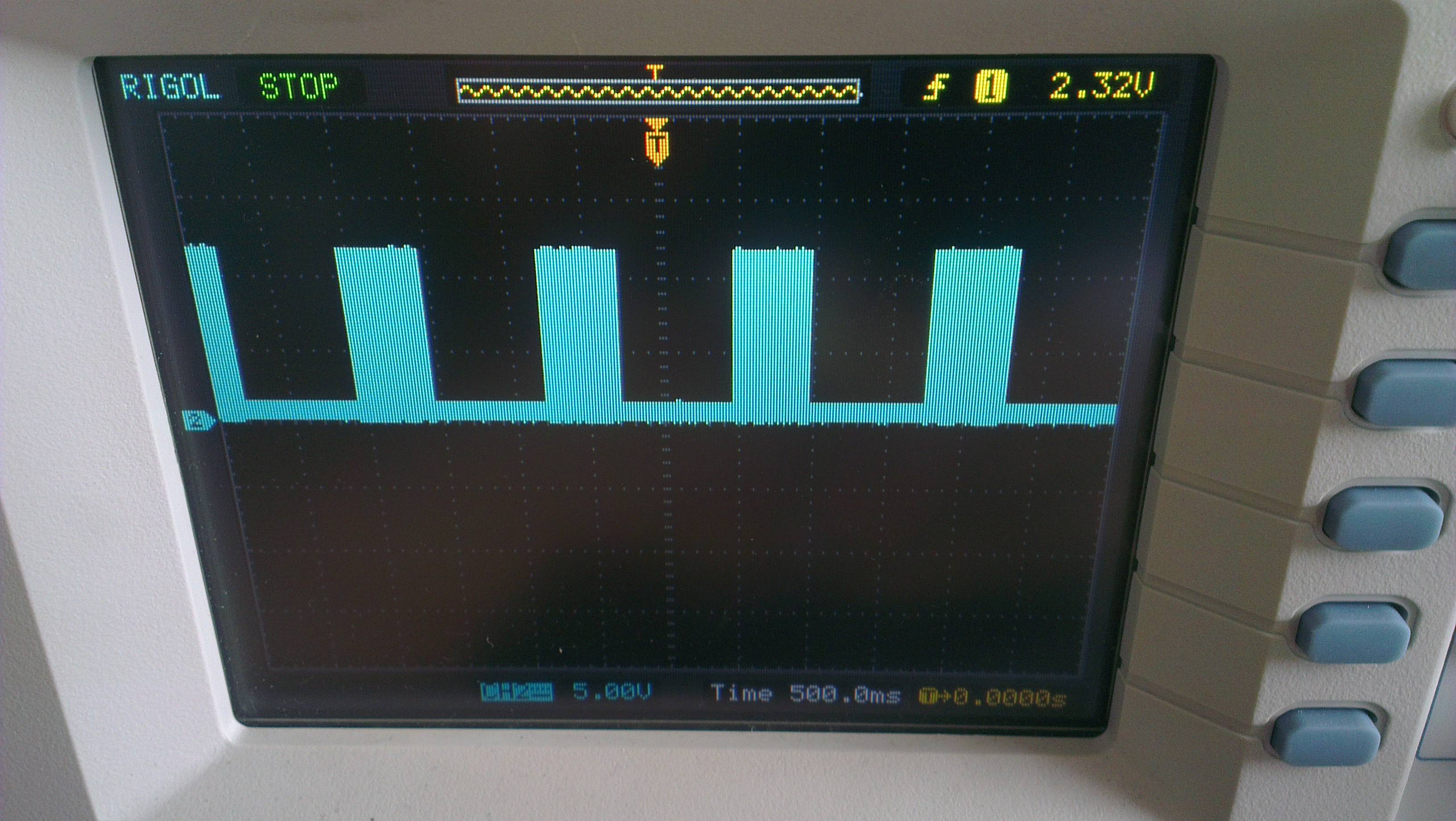 In both cases the PWM frequency and duty cycle remain intact, disregarding the voltages.

What is the purpose of R2 in the first circuit? It's limiting the maximum current to the motor to 12V/220Ω = 54.5mA, which is probably not enough.

Just connect the motor directly to the collector of Q2.

You also need a couple of other changes: put a resistor (e.g., 4700Ω) between the MCU output and the base of Q1; otherwise, the B-E junction of Q1 looks pretty uch like a dead short to ground to the MCU. Similarly, you need a resistor (about 1200Ω) between the collector of Q1 and the base of Q2; without it, when Q1 switches on, it basically shorts the 12V supply to ground via the B-E junction of Q2. 1200Ω limits the base drive to Q2 to about 10mA, which should be plenty.

5
Functional difference between various astable 555 circuits
4
How to read a PWM with a separate ground using PIC?
1
Is a 555/6 suitable for generating a 1-3000Hz square wave from 0-5V control voltage
0
Two states cpu-less PWM generation
0
Using arduino and transistor for motor control
3
Two-Channel PWM LED Driving at 12A Load Issue (Signals affect each other)
0
I need to vary the duty cycle between 50% and 70% of a PWM signal
0
Generate a fixed number of pulses on the STM32F4 PWM
1
How to Have Two PWM Signals with Adjustable Duty Cycle