How long will this low duty 555 LED blinker last on batteries?

I know there are many questions about LED blinkers, but I haven't yet found a clear answer for this.

I have a 555 circuit blinking a blue led (or three in parallel). I has a low duty cycle (using a diode between pins 6 and 7). 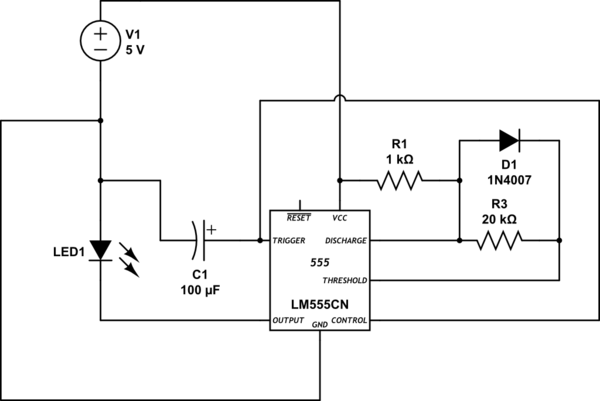 It works fine (blinks the LED without resistor, giving a very bright light) when powered off a USB 5V source, but I have no clue as to what the power consumption is.

I want to transfer this design so it can run on batteries for many hours as a beacon (at least for weeks) (I will add a magnetic switch so it can be waterproof). I need it to last as many hours as possible, without much bulk. Is this circuit moderately efficient for that purpose?

Clarification : It will be used as a beacon, off for 1-1.5 seconds, then on for a very short time. No accurate timing required. It is working as described now with the only difference being that the 20k resistor is in fact a 10k plus a 10k pot to play with the timing while prototyping.

The 555 timer itself will use a substantial amount of current no matter how little light is consumed by the LEDs. There exists a lower-power almost-equivalent chip called a 7555 which might be suitable for your purposes (if you found a correct circuit for the 555), but if you use it you should probably increase the "timing" resistors by a factor of ten to a hundred compared with what you would use with a 555, and reduce the capacitor likewise [increasing the timing resistors by a certain factor and decreasing the capacitors by a like amount will reduce power consumption, but may make the circuit's behavior vary more with things like supply voltage; so long as the resistors are large enough that overall power consumption is dominated by the LEDs, little will be gained by increasing them even further].

An alternative approach would be to use a small microcontroller to operate the LEDs. If you want to have the LEDs on for e.g. a half a second every ten seconds, the power used by 7555 the and attached resistors would be less than that required by the LEDs, but if e.g. you wanted to be on for 1/20 second every five minutes, more power would be spent on the 7555 than the LEDs; a microcontroller could cut power consumption tenfold.

Once a circuit is decided upon, figure out what portion of the time the LED is on, determine the current required when the LED is on and when it is off, and use those figures to compute the average current. Then find out the number of milliamp hours your battery is good for. If you were using e.g. a 500mAH battery, your were on 1% of the time for 100mA, and your circuit drew 0.25mA when the LED was off, then your average current would be 1.25mA and your battery would last about 400 hours.

You can use a CMOS 555 such as the TLC555 to reduce the consumption. You can connect the LED from the +V to output (through a resistor) and lose the diode (the chips are better at sinking than sourcing current anyway).

You can increase the values in the timing components by at least 10:1 (say 200K and a 10uF ceramic capacitor).

The CMOS 555 is not great at sinking high currents, so the output could be buffered with a P-channel MOSFET to get a very low impedance. You should limit the LED current to 100mA (or whatever the LED maker says is safe), and measure it to ensure you're within that limit. A series resistor will accomplish that. If the LED is on for 10msec at 100mA, say, then the average LED current is 5mA. Let's say that's the average current for the entire circuit, since we've been so careful to cut down the wasted current by changing the 555 and the timing components.

Three weeks 24/7 is about 500 hours. If you have (say) 3 or 4 AA cells, with 2AH capacity, then 5mA will last about 400 hours, so it is within reach provided 10msec every 2 seconds at 100mA is bright enough for you. If you inhibited the beacon during daylight you might be able to increase the lifetime considerably (assuming that's appropriate).

If you wanted a fancier blink sequence, which might be advantageous for getting attention, a small micro such as a PIC (or one of the Asian parts for high volume) would be a sensible choice.

Not the answer you're looking for? Browse other questions tagged led low-power 555 blink or ask your own question.