Why do most NEMA 5-15P (North America 125V 15A) line and neutral blades have holes in them? I've been wondering this for quite some time and haven't yet found a satisfactory answer. 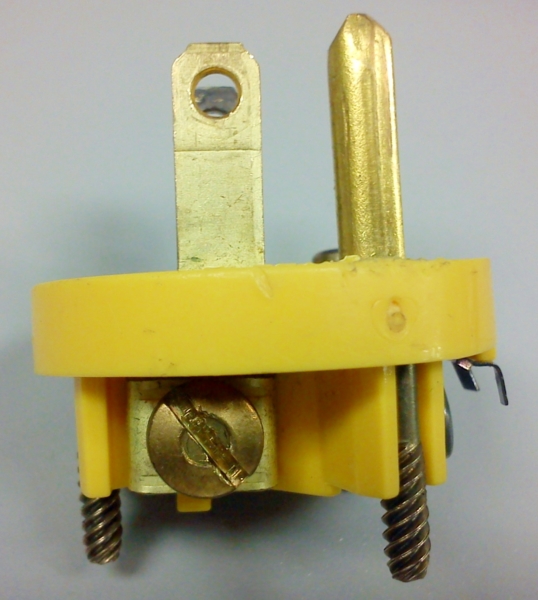 According to page 17 of ANSI/NEMA WD 6-2002, "The hole in flat blade is optional, and it is intended for manufacturing purposes only. However if used it must be located as per dimensions shown above."

That doesn't really answer your question though. Since they have specific dimensions, I'm guessing it's a hold over from a deprecated feature. I'm about to replace some 60 year old outlets today, so I'll have to tear one apart and look for captive ball bearings, bumps on the wipers, etc.

Here is an example of a receptacle that locks using the blade holes. http://fam-oud.nl/~plugsocket/NorthAm1L.html

Almost a century ago, back in 1915, John J. Kenney filed his idea of an electrical connection system and connectors that "prevent accidental separation" for a patent that was granted to him on 25 May 1920: US patent 1341468.

A small quote: "When the terminals (4) and (5) reach final position these projections spring into openings (25) in said terminals and positively lock the cap and shell and prevent accidental separation thereof."

Another slightly younger 14 September 1920 US patent 1352817 shows the holes without extensive comment/description: as if they were already routine by that date.

Even relevant modern day patents like Mark Kenny's US Patent 6595810 from 2003 still reference this John J. Kenney patent and clearly state it's use.

As Cubiclegnome & Olin Lathrop already said: there were even physical locks in production, besides the known "out-dents" on the "blade-engaging members" in the receptacles.

I think this 'origin' out-dates ANSI/NEMA WD 6-2002 regulation, that also had to regulate what was already in large scale use.
Just like the wide-spread use of non-fixed lightning armatures (like desk-lamps and such) and house-hold appliances like boilers (whose chassis was 'grounded' to 'neutral' instead of 'earth', which was actually legal North America until 1996!!) lead to the (invention and eventually mandatory) use of polarized wall-outlets.

But who knows, there might even be an older origin/patent (but I can't find any reference to it).

Side-note:
I was once told (what I believe is an urban myth since the dates and proof that I presented above are prior to WWII) that the holes are a left-over from World War II and a result of the War Powers Act to maximize the quantity of basic material for the war effort. Thus the SEAMA (Small Electric Appliance Manufacturers of America) was able to save tons of brass that was more "Efficiently Allocated" :P .

Oddly enough, the holes in the blades are for locking out the plug. A padlock or a tag (saying "factory sealed", or a warning, or an instruction) can be threaded through the holes. With the tag, the plug wouldn't fit into the socket, so the user has to remove the tag, thus acknowledge the instructions.

Better retention in the socket too.

I was told a long time ago that the holes are for optional locking purposes. Modern outlets don't tend to use them, but in the past there were outlets that had a spring-like arrangement that used the holes so that extra force would be needed to pull the plug out.

A long time ago only once I saw a wall outlet that had a lever at the top. You plugged the socket into the hole and flipped the lever. Spring-loaded pins would then go thru the holes to lock the plug into the outlet. The pins were spring loaded so that if a plug didn't have the holes there would be extra friction but not positive locking.

I just looked around, and can't find any product that is like that now. I guess there wasn't enough of a market for it.

I have seen those holes used to retain the plug in the socket. Imagine a spring loaded ball that nestles into the hole when the plug is inserted. The ball is larger than the hole and when engaged with the holes on the blades provide a retention force. In picture blade is removed by pulling to the right. 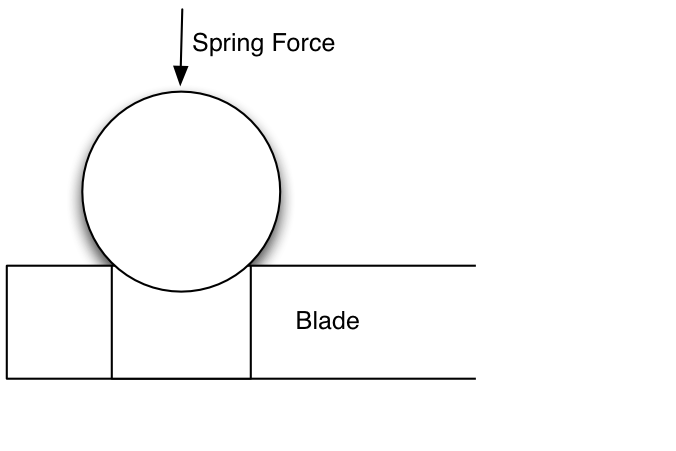 Well, this is rather embarrassing. I totally misread your question.

What's worse is that I don't actually know why the blades have holes in them. I suspect it's to help dump crud that wipes off when the blades are inserted into sockets, but that's just a guess. It could just be a result of the manufacturing process.

Edit: actually, from what I can tell, there are bumps on the wipers inside of some receptacles. The bumps fit into the holes, which makes the plug stay in the socket more securely. But, I did a little destructive testing just now on an extra receptacle in my junk drawer, and it definitely had no bumps.

Anyway, here's an irrelevant explanation of why the holes in NEMA 5-15P receptacles are different sizes.

One of those holes will shock you; the other won't. Normally, this doesn't matter, because you don't stick your finger in either hole.

When you wire a light fixture in a lamp, you put the switch on the hot side of the circuit. That way, when you replace the bulb, if you accidentally stick your finger in the bulb socket, you won't get shocked if the lamp is switched off. If you could reverse the blades, this wouldn't be true-- you could get shocked even with the lamp off, because the switch would be on the neutral side, while the hot wire would be unbroken.

More generally, electricians try to minimize the length of wiring that is hot so there's less damage done when something goes wrong. From a functional perspective, it makes no difference, but when we have actual humans interacting with circuits, faulty hardware, and bad luck, it's nice to be able to keep track of which wire is hot.

I believe the hole serves to provide a higher pressure wiping action for low insertion force in a hostile environment. The result is longevity, lower resistance, more reliable connection, lower temperature contact from lower resistance, more reliable connection for household frequent cycling, which is not necessary for low cycle appliances of higher ratings.

There may be other valid historical reasons for the creation, like being able to remove dry bubble gum stuck on the plug tips by prankish little kids. In any case the hole serves to reduce surface area for more pressure while wiping the surface area of the recepacle and visa versa. Good receptacles have a 3 point contact per pin with several different patented designs. (See Hubbell) The object is to keep the mating surfaces as clean as possible while providing low insertion force and improved retention force.

Smooth blades are poor for mating relaibility in my experience with older sockets. Reducing the contact area of the blade which mates with pretensioned spring brass contacts in the receptacle give higher contact PSI and permits lower contact resistance and temperature rise without excessive insertion force.

You can see the contacts do not provide a spherical mate with the hole but rather wipe each other to allow dirt to escape thru the hole and allow the hole to wipe the mating contacts.

It seems the larger rating plugs for 30A do not have holes and require much more exertion to install by design to provide the contact pressure for low resistance and harder for many people to use. They are intended for industrial equipment or fixed appliances so that should not be a serious impediment.

These are only my opinions.

Not the answer you're looking for? Browse other questions tagged ac or ask your own question.

9
Why do some power plugs have holes in them?
7
AC polarity detection
7
Power plug orientation and usability

2
When measuring AC via an ADC, is it bad to have common ground?
31
AC: Why differentiate between Ground and Neutral?
3
Variable frequency AC power source
0
combine 2 x 5A circuits from a single phase 240V mainline
2
Recommendations for using a 240V outlet with 120V equipment
1
Low Voltage AC as power source for Audio Equipment?
1
Current flowing in an open circuit to make it the same voltage
2
Power line surge on the Active and Neutral line
2
How to convert 12 V DC to 12 V AC 50/60 Hz PSW?