I'm a software engineer doing some basic (I thought) hardware design. I have built a 5V power supply around an Analog Devices ADP2303 non synchronous step-down regulator. The schematic is from the top of page 25 in their data sheet.

I have three PCBs built, the original prototype and two "second generation". The schematics and parts are the same but the PCB layouts are slightly different (I had to cut traces and add two jumpers on the original to get around a design error). My problem is that the original board works perfectly, holding 5 VDC under load, but in both newer boards, the output drops to 2.4V when I connect a load - a Raspberry Pi. In all three cases, I'm using the exact same 12V 5A AC adaptor as a power source.

I have no idea how to debug this problem and would appreciate any pointers. I do not have an oscilloscope, so I hope that's not a requirement.

In looking more closely at my PCB layout, I definitely did not follow AD's layout at all, in either generation of board. But the two big differences are (a) gen-1 punched the ADP2303 ground pad thru to a full ground plane on the back of the PCB, while the gen-2 did not (I don't know why), and (b) in gen-1 the connections between pin 5 (FB) and the output capacitor and between pin 7 and ground are jumper wires instead of traces. So I'm wondering what the likelihood is that these differences are responsible for the fact that gen-1 can support a Raspberry Pi at 5V while gen-2 output drops to 2.4V when connected to a Pi, and whether redesigning this part of the board will solve the problem.

As there is a clear consensus that my PCB layout is really pathetic, I am redesigning based on AD's recommended layout: 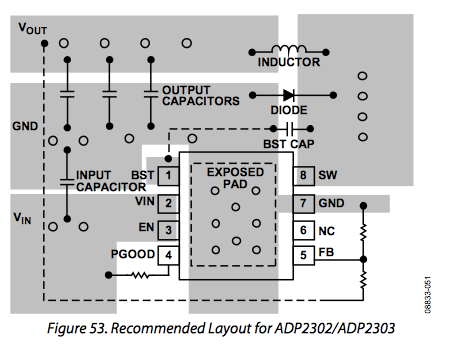 Thank you all so much for taking the time to explain and recommend. I will update with my results when I get the redesigned board.

If I understand correctly, you have two generations of PCB with the same parts but different layout. And the following result:

If the components are the same, then the problem must be with connections. You may have an open or a short somewhere, or forgot to connect some component lead. You basically need to perform circuit analysis and determine what is different. Your Gen 1 proves that the circuit and components are capable of working, but then Gen 2 board has a flaw. My hunch is that the task of cutting traces and adding jumpers to correct a design flaw is incomplete: there must be (an) additional design flaw(s) you overlooked.

Debugging it needn't involve an oscilloscope unless you need to look at high speed signals in your circuit.

Analog Devices has an evaluation board for this ADP2303 3A step-down switch-mode power supply. Even if you don't have the actual board, the user guide is worth reading (http://analog.com/static/imported-files/user_guides/UG-189.pdf). This type of product and its PCB layout are generally similar to products I've done years ago for one of AD's competitors. Given that you're self-identified as a software engineer / electronics novice, save yourself some trouble and copy their entire evaluation board design, as closely as possible. That's what it's for: to help you succeed with this product.

Here are a couple of key points to help make sense of their evaluation board design:

Their evaluation board is 4 layers. I'm guessing the copper clad is 1.5oz or 2oz because this is a power supply. (1oz copper has sheet resistance approx. 0.002ohm per square, so thicker copper and wider traces give lower impedance connections.)

Layer 1 is power components (which are all surface-mount), with small islands of high current mesh between components.

Even though ceramic capacitors generally have very low ESR (effective series resistance), putting multiple capacitors in parallel is common practice to reduce ESR, improving transient voltage response. This is especially important if the load is an FPGA or a fast CPU, because a sufficiently fast high-current demand is fed by these capacitors before the regulator begins to respond. Too much current load too fast, will cause the output voltage to momentarily "brown out", which in turn may lead to erratic unreliable behavior. See figure 13. More output cap helps reduce those transient spikes.

The output capacitors are connected together with 6 vias at each end (because vias are inductive), and VOUT plane is on PCB layer 1, 3, and 4 to get the connection impedance as low as practical. The extra copper area also helps conduct unwanted heat away from the components.

Layer 2 is groundplane, with no traces. The only breaks in layer 2 are the annular rings of the vias.

Layer 4 is other power planes. Note the trace that runs from one of the VOUT vias to the feedback resistor divider. This is like a "Kelvin sense" trace that regulates the output voltage at that via. If the load were far away you might have to worry about remote sensing, but if it's all on the same board then it's fine to sense at the VOUT capacitor nearest the load.

Since you're probably putting this power regulator on the same board as the load, don't allow other unrelated traces to route though this part of the layout. Treat this layout as an opaque "brick" that owns that square inch of board space, on all layers.

Component selection is important. More than just the values shown on the schematic. If at all possible, try to use exactly the same components they used.

The inductor (L1) is used like a "bucket" that is charged and discharged with energy during each cycle, so L1's energy storage is the key parameter (0.5 x inductance x current squared, often just specified in data sheets as LI^2), next to its series resistance (the lower the better), and finally its actual inductance. Self-resonant frequency must be higher than the 700kHz switching frequency, otherwise it won't behave like an inductor. Be sure to look at the photo in figure 1: your L1 inductor should look generally the same.

The feedback node (FB pin, and the connection between R3 and R5) is a high-impedance input that controls the output voltage. This node must be kept very small area and low inductance, and shielded from magnetic field EMF interference. On their eval board, AD placed R3 and R5 right next to pin 5. Also note they used a zero-ohm resistor instead of a 0.1inch jumper.

Don't overlook the boost capacitor CBST. This is the "flying capacitor" of a charge pump that makes a higher-voltage power rail that is needed to drive the internal switch. This should be near U1.

Plan on using an oscilloscope to help validate your next prototype. Even though the output is meant to be constant, there's more going on inside a switching power supply regulator than with the more common linear regulator. AD's evaluation board user guide has a good write-up of what to measure, what the waveforms should look like in different operating modes, and even how to minimize the ground inductance of the oscilloscope probe.

2
How can I make any basic boost converter that actually works?

1
Why is this multimeter power supply short circuit when off
1
LDO layout: position of output cap relative to load
0
Power supply PCB
2
Powering multiple devices from a single supply with 48V
15
How to create a regulated 5V power supply from an unregulated 5V power supply
0
TI TPS57160-Q1 step-down converter outputs sawtooth-like voltage at high input voltages
0
How do I switch on after the current (out of a power supply) has established?
0
Transient Power Supply with LM317 and LM2576
9
Full bridge driver capacitor ringing problem
3
RT6224D-based step down circuit yields 0V - why?