My colleagues and I are having a discussion about the circuit below, specifically: Is the op-amp being used as a comparator, or as an amplifier, or something else entirely?

The circuit is a negative voltage regulator that tracks a variable positive DC regulator. The LM337 (REG3) output is equal and opposite to the positive supply (connected to the top end of R5). The op-amp + input is referenced to GND. When the DC outputs are equal and opposite, the voltage divider R3-R5 produces 0V at the - input. The output of the op-amp produces the DC voltage required to put the LM337 regulator output at the desired voltage, exactly 1.25V more positive than the output (e.g. if desired output is -10V, ADJ is -8.75 because of the 1.25V reference voltage of the LM337).

Comparator? It's comparing the output to the reference. Amplifier? The LM337 is in the feedback loop and the op-amp is amplifying the error between the desired voltage and the reference. In other words, comparators are usually open loop, with rail-to-rail outputs, but this is definitely a linear circuit. 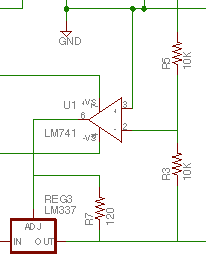 Is the op-amp being used as a comparator, or as an amplifier, or something else entirely?

It's being used as a linear amplifier I reckon and if you showed more of the circuit I think you'd find that the top of R5 goes to a positive power (or reference) rail. That positive power rail will dictate what the negative output voltage will be from the LM337.

Regulation occurs when the op-amp's inputs are equal and, because pin 3 is tied to 0V, when pin 2 attains 0V, the LM337 will be regulating.

I'd say its working as an operational amplifier. Being used as a comparator or an amplifier with a specific gain are just special use cases, and the circuit shown is none of these. Dave Jones has nice video explaining the basics of OpAmps. Maybe watch it and then look at the (complete) circuit again.

In a nutshell (and much simplified), the OpAmp tries to have its output voltage so that both inputs have the same voltage. It does that by amplifying any differences between its inputs. In the circuit above, the positive input is connected to ground, and the negative is connected right to the middle (in terms of voltage) between the positive and the negative rails. So its trying to regulate that voltage to ground, which means that both have the same (absolute) value.

If the negative output gets too large (too negative), the negative input get lower than the positive, meaning the output also swings nearer to the negative rail (the amplification). That in turn means the LM337 regulates the negative voltage back, so you get a stable value.

So there is a feedback loop (meaning its not a comparator), but there also is no fixed gain (so its not an amplifier in the common sense).

2
Techniques for analyzing Comparator circuits?
1
Voltage comparator with single rail op amp
1
Problems while using op-amp as a comparator on a single supply
5
Pick largest of several voltages with analogue comparators
1
How can I use a comparator in a circuit?
0
Comparator Undesired Behavior
1
Unable to connect amplifier output to comparator in opamp
3
Comparator as operational amplifier