Why do they place a high current device in a low current package?

For instance, it is said that the practical current limit of the TO-220 device is 75A. But I frequently see MOSFET devices for which the specified maximum continuous drain current is above 75A. (Examples)

Is there any practical difference between two TO-220 devices such that, one of them has a maximum continuous current of 75A and the other one has a limit of 150A, and all other specifications are same? If there is no difference, why do they bother producing high current devices in TO-220 package and advertise it with current ratings above the practical limit?

Higher rated devices will likely last longer, run cooler and run more efficiently under the same current conditions even if the package doesn't allow the silicon to be used to the full potential. Another benefit would be the ability to run at higher pulse currents in a higher rated device as the 75 Amps stated is a continuous current rating rather than a pulse current rating.

Another reason this may be done is because it is cheaper to make one silicon device and package it in many different cases.

The link you had goes to a supplier, who, it appears, doesn't read the data sheet very carefully. I would argue that they should be listing these exact parts at the lower current in the packaging provided.

The internal silicon is capable of higher currents, but the data sheet clearly shows that, as packaged, these parts are not capable of such high currents. Refer to figure 9 on page 5 of the data sheet: 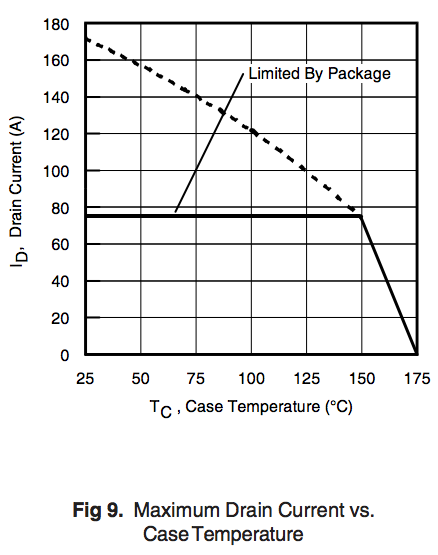 They could manufacture a 75A silicon part just for these packages, but that would result in significant part proliferation and stocking issues. As it is, they manufacture the one part, store it as dice for a short time, and package it according to customer demand. This reduces the load on their plants and storage facilities, and they can focus on improving the reliability and lowering the defect rate of one part rather than two, or more, different parts.

There are a number of factors which limit the maximum current a device can handle. These include DC resistance, pinch-off current, lead bonding, and thermal dissipation. Some characteristics, such as having a low DC resistance, will allow a device to handle more current than it might otherwise be able to, but may also be useful in other ways. For example, suppose one is trying to power a device which requires 50 amps at one volt (i.e. 50 watts). If one were using a device with an internal resistance of 0.01 ohms, it would have to dissipate 25 watts when passing 50 amps. A TO-220 would have no trouble dissipating 25 watts, but the device which would require 50 watts would instead require 75 (of which a third would be wasted in the transistor). Using a transistor with a lower internal resistance would reduce the amount of power wasted in the transistor--not necessarily a benefit to the transistor (which would have perfectly happily dissipated 25 watts all day) but to whatever is supplying the power.

Because there is often an inverse correlation between current-handling capacity and internal resistance, the silicon transistors which can handle higher currents are often useful in situations which don't need high currents but do need a low internal resistance. In such cases, there would be no need to construct the transistor's case or bonding wires in such a way as to handle the the full current and head dissipation of which the transistor might be capable, since the part would not actually be exercised anywhere near those limits.

Not the answer you're looking for? Browse other questions tagged high-current specifications ratings practical to220 or ask your own question.