How can I measure the RPM of a Frisbee?

I'd like to make a little device I can stick onto a Frisbee that could measure stats such as RPM/speed of the Frisbee when thrown. Would this be realistically possible?

I was looking into near-field communication to transfer the data from the Frisbee into a smartphone, but it's just an idea. It seems like it would be difficult to make something small enough to not affect the flight of the Frisbee itself. Can anyone think of any ideas for this?

Off the top of my noggin here's an idea. Build a small tone generator and tiny speaker onto the frisbee with the speaker around the edge (balanced mass on the other side of course).

When you spin the frisbee you could record the sound being made and it will have doppler features depending on how fast it is spinning. If you can analyse the data recorded you should be able to tell the rotational speed.

The RPM of a frisbee is something like 10rps, so you could spray paint a black and white pattern onto the frisbee and video it. A 60fps (120 fields per second) camcorder should be able to capture it quite reliably.

There is a paper describing a method for doing just this here: Flight Dynamics Measurements on an Instrumented Frisbee. The techniques worked well; I would use this as a starting point.

Essentially it was a microcontroller (BS2IC) and a 2-axis accelerometer (ADXL202), mounted to the center of the frisbee with silicone glue, and then balanced by the batteries (CR2032's) which were mounted with tape. The hardware was specifically chosen for its low power consumption.

A small switch was mounted near the edge to permit easy activation near the moment of throwing, again to reduce power consumption, and also because the space for data logging is limited: 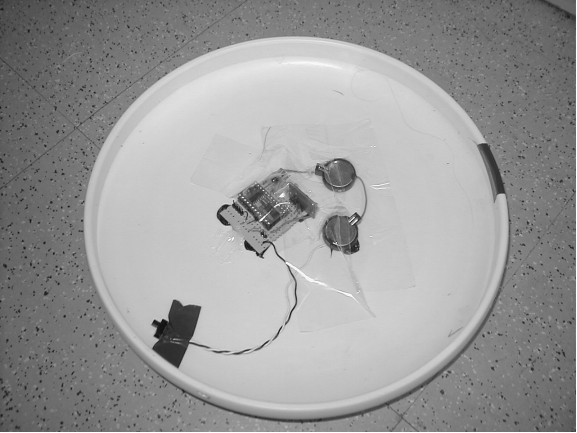 You could use a low-power near-field radio system such as Zigbee (or Bluetooth; which is less convenient for initial setup, and requires at least the addition of a button or some other logic to help make pairing usable but natively supported by many devices, e.g. your smart phone) to stream data to a nearby device, or you could log data on the microcontroller and retrieve it later.

In any case, that paper got some interesting data. In particular, note the author's observation that direct data can be more easily extracted during steady periods of accelerometer readings: 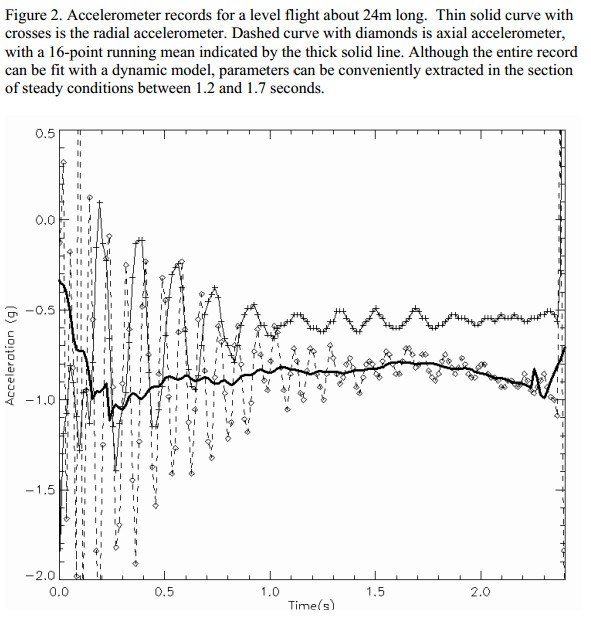 That graph gives a nice view of initial wobble becoming steady during flight, as well as the centrifugal force.

It doesn't really seem necessary to overcomplicate it with light / sound sensors; although if you do, I would log / transmit raw data and do the actual processing on the receiving device to limit power consumption and microprocessor performance requirements, at the expense of increased memory requirements (for logging).

Two small SMD ICs, one an accelerometer, the other a gyroscope, on opposite ends of an FPC, with a microcontroller, EEPROM, and coin cell battery equally balanced in the midddle of the frisbee. Minimal weight and air friction. Have the microcontroller log the IC's output to the EEPROM. The combination of the graphed accelerometer and gyroscope output will give you an approximation of speed and rpm.

FPC isn't needed; some thin custom PCBs with a magnet wire connecting them would work too. We are talking grams and ounces at most anyway.

For wireless access, a microcontroller or SoC with Bluetooth low energy would be great. Look at the Texas Instruments Sensor Tag for a complete development kit that has a BTLE enabled SoC and I²C accelerometer and gyroscopes as well as iPhone/Android app examples powered by a single CR2032 coin cell Hell, you could take the sensor tag, remove the red casing, and tape it to the frrisbee and the rest is pulling data from the free app.

Just throwing an idea out there, no idea how feasible it is: MEMS gyroscopes are small, cost-effective, low-power sensors capable of measuring angular speed. As for measuring speed, assuming you mean linear and not angular speed, then the only thing I can think of that's not extremely complex is using a GPS module like this one. Given two consecutive positions, and knowing when each measurement was made, you can easily calculate linear speed.

Many of these should be able to be made very light and small:

An accelerometer that points at some angle between radial and vertical will have a varying gravity component as it spins. Even a radial one will have this except when the flight is exactly horizontal.

A light sensor will in most cases also do the same. As it transits between ground features or ground to sky and back it will see brightness changes and these will have a correlatable rotation speed component.

An LED transmitting radially with a modulation frequency on it will be able to be detected at substantial distance electronically. You can look for modulation or could video it and look for the LED signature in frames (arguably harder).

If you provide a stationery modulated source that illuminates it you can place a detector on the Frisbee. If it is acceptable for another person to help with tracking the beam can be tighter and they can site by eye to track it. A simple post and circle site or two rings will probably allow a say 30 degree beam to be held on the frisbee thereby much increasing the signal level.

RF dfing should be viable.

Air pressure forces probably vary at a point on the peripheral as the frisbee spins while in transit. A pressure sensor with a port on the rim should see a repeated pattern.

The hardest part, optically, is targeting a frisbee in flight. Aside from that you can do the whole thing optically.

A camera with a properly painted frisbee is a good low-tech solution. However if you insist on an electronic solution then one of the few things that would work is to use a digital compass.

I've looked into this problem because I'm planning on building a monocopter (see: http://www.youtube.com/watch?v=1n6ZmwzSL0Y) and I've found that gyros don't have a fast enough rate to do it. It's not the problem of the rate of data but a more basic one of the maximum angular velocity measurable by the gyros as stated in the datasheets. Most gyros (in fact, all the ones I've looked at) will simply report something like 0xffff all the time when attached to something like a frisbee.

Digital compass however don't have this problem because it's not measuring angular velocity but absolute position/heading. In fact, the successful monocopters like the MIT and Embry Riddle ones use digital compass for orientation.

Another solution I've considered is a light detector. Something like this: https://www.sparkfun.com/products/9768. Then simply look for the brightest spot and assume it's the sun and time the duration between bright spots to get the time of a single rotation.

Put some light sensor with a narrow field of view + chip that can detect the light pulses received and their interval. Filter the received light for some frequency to avoid spurious detection, and make the light source match that frequency.

Search for "Frisbee Cam". They used a vane to keep the camera from rotating. The same idea could be used to hold an optical senor from turning so it could count marks going by to measure rpm.

The TI cc2541 bluetooth gyroscope could be used to to this. Only $25 and it only weighs an ounce or two. http://www.ti.com/tool/cc2541dk-sensor

You can use a accelerometer like MMA8451 and add a HC06 Bluetooth Module and a small microcontroller to it. The RPM is easy to calculate.. You read out the force along the Z-Axis! Now you have your centrifugal force. This force is simply increasing proportional to the RPM.

I would consider going for a light sensor behind a slit as a part of an oscillator fed into a simple rf carrier - you could receive the signal and the variation of the tone would give you the number of times per second that the brightest light passed the slot. You could also consider using a DF antto check the position for the Frisbee giving you rotational and absolute velocity.

Not the answer you're looking for? Browse other questions tagged microcontroller pic or ask your own question.

10
What microcontroller should I use?
9
Bluetooth simple oscilloscope
1
PIC24 bootloader writing the config bits
1
How to measure an old motors RPM
10
Is it safe to connect two MCU pins directly to each other?
0
Connecting two different microcontroller outputs together to drive a single device?