I'm trying to make power supply for RaspberryPi and another one for usb hub and another for 9 Ping sensors(20mA)+ few servos + few microcontrollers like Atmega328P. I have only LM1084 or LM7805. So my choice is not big and I choose LM1084 as it allows more current. So it makes 3 "supplies". It all going to be powered by one LiPo 2S 2200mAh(~8V).

So far my choice of capacitors as follows: on input side it's 0.47uF electrolytic capacitor and on output 0.1uF ceramic cap and 220uF electrolytic. Datasheet says put 10uF tantalum on both sides. I don't have these. Only ceramic. Should I follow datasheet with ceramic caps? Now I'm using values from 7805, my bad. And without load it's 4.99-5.00 and with changing load of 2 servos between 0.320A and 0.630A in second voltage changing like 4.89-4.93 and like this. What will be better choice of capacitors here? Maybe I should put 10uF ceramic on input not electrolytic? 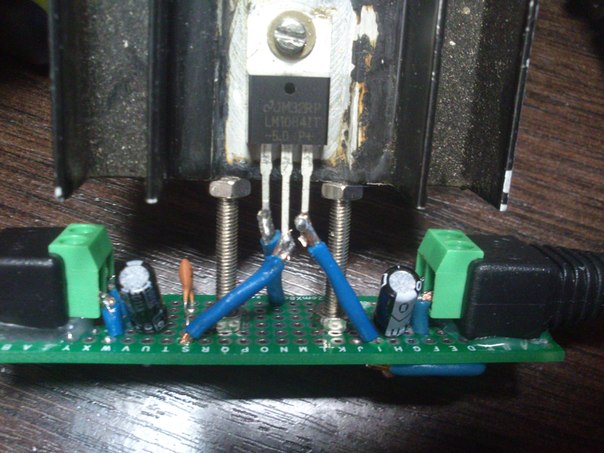 Or better I just go and buy car cigarette usb adapter and not make any fancy and large things?

For a detailed explanation on this and other related topics, though probably much more than you may be interested in, you can check the excellent "Input and output capacitor selection" Application Report, from Texas Instruments,

You can also check some general advice for troubleshooting circuits with linear regulators of the 78xx family,

My personal, ethical choice: I try to avoid Tantalum capacitors, whenever possible, due to the enviromental concerns and conflicts it is creating worldwide, and specially in Congo and other African countries,

Why don't you read the data sheet regarding capacitance on the LM1084? It clearly says that a minimum ESR corresponding to a 500kHz pole is required. If the capacitor has very low ESR such as a ceramic type, you can just add an appropriate series resistor. Ignoring the stability requirement can lead to oscillation- LDO regulators are not as forgiving as regular 3-terminal regulators.

Not the answer you're looking for? Browse other questions tagged capacitor voltage-regulator raspberry-pi or ask your own question.