What does this capacitor do? (Microwave biasing circuit)

The book does say somewhere else, though, that often the RFC is replaced with a \$\frac{1}{4}\lambda\$ line which converts the short created by \$C_B\$ to an open circuit, so would that imply that that cap is redundant if an RFC is used? 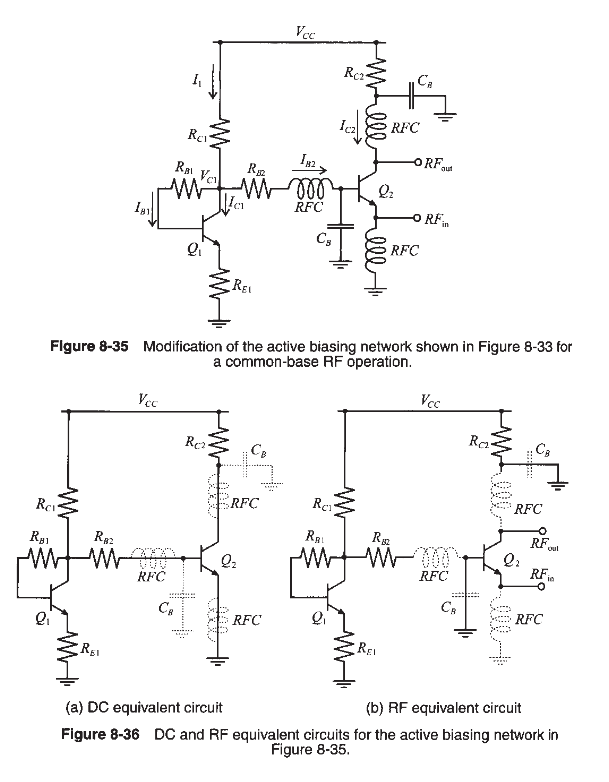 It provides a low impedance point for RF for the voltage divider formed by the RFC and Cb, thereby making the decoupling more effective at keeping RF out of the power supply.

I say simplistically as there are all sorts of real world considerations to reduce the level of reduction (and at RF >~~< probably features in most of them).

Add Cb and you (again simplistically) get a divider formed by the RFC and Cb and then this is in turn divided by Rc2 & Z supply. Cb will usually be able to be placed close to Q2 in such a way that impedance at frequencies concerned is able to be minimised. Simplistic as above plus of course the 2nd stage filter loads the first and there is an impedance mismatch or few and ... . Grab a Smith chart, work out the real world effects of what is present where Cb is terminated (>~~<) and lay to.
Ends up all very arcane and uncertain very rapidly BUT adding a low impedance point half way through the decoupling path has got to be good for you.

Entirely consistent with RF and Murphy being at work, if you type >~~< without a space between the > and the preceding letter the 2nd half of the operator and a semi random portion of the following text does not appear in the output copy.
Ask me how I know.

Not the answer you're looking for? Browse other questions tagged high-frequency bias microwave or ask your own question.

4
Simple Biasing Circuit
1
Why does this work for biasing an AC signal for A/D conversion
3
Understand this filter and biasing circuit
1
How does this continuity/mains tester detect microwave RF?
0
Does Vbe remain constant when Vb changes but changes when Ve changes for this BJT biasing circuit?
1
does my microwave oven have acceptable leakage?
0
What is this microwave component?
0
Biasing circuit - Voltage follower circuit
1
Gate voltage range - Biasing circuit