How does this single supply opamp circuit work, and what does the output look like?

When building audio circuits, I have often used a single-supply non-inverting configuration in which the feedback resistors are connected to via 10uF electrolytic capacitor to ground instead of directly to ground. I found this circuit online once, but don't generally see it when looking up single-supply circuits.

How does this circuit work? And how does the output end up more or less in the middle of the output range of the opamp (0v -> 9v in my particular case). 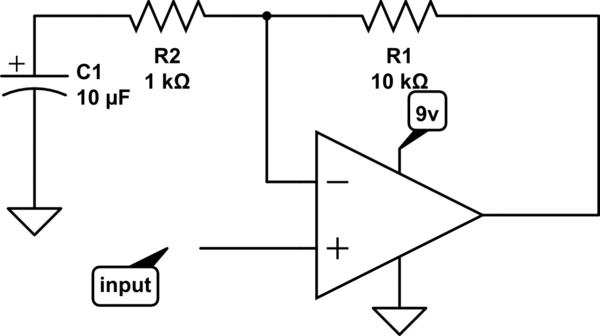 EDIT: The reply that states that this doesn't work isn't quite correct - since it does :). However I did omit to mention that the input is not referenced to ground but instead somewhere around 5v or so. It's not half-supply though, since it came out of a class-A FET input stage and ultimately from an electric guitar input.

Anyway, the answer that you get a DC gain of 1, and an AC gain of 10 is the one I was looking for. I'd like to understand more about this though. Is it that at DC the capacitor is effectively an open circuit, and so the op amp becomes a voltage follower? And at AC it is a resistor of some frequency-dependant size, and thus it becomes an amplifier of some gain?

It doesn't work.. at least it needs a power supply on the op-amp.

When this circuit starts up, C1 is discharged and at 0 volts. This will cause the junction of R1 and R2 to be close to 0 volts. This junction goes to the inverting ( - ) input of the op amp. Assuming the input signal is not at ground (you have to bias this up somewhat) the op amp will swing fully to the positive rail. In that condition, current will flow from the op amp's output, through the two resistors, and charge C1. Once the capacitor has charged to the point where the inverting input voltage rises above the (non inverting) input voltage, the output will swing towards 0 volts. That will stop charging the capacitor, and the circuit will come into balance.

If C1 is leaky (as electrolytics can be), it will throw the balance off.

As mentioned, the input (your audio source) has to be biased positive, because if it swings below zero volts, it's below the supply rail and the signal will be clipped.