This is my first Arduino/electronics project and I am a little bit confused about the components I need to handle huge amount of currents and the circuit.

I want to have full control of 32 (maybe 40) 6-pin 3W RGB LEDs from an Arduino Uno. By saying full control I mean to be able to adjust the brightness of each led independently.

If all LEDs are on we need 32 amps at least. Of course I'll need an external power supply. I was thinking of a common computer PSU but I'm not sure if that's enough. Any other suggestions?

Other power issues that I have to solve:

I've searched around the internet about similar stuff but I got confused since there lots of electronic components around the circuit and so many ways to connect them.

Any schematic and details about the components I'll need will be appreciated.

If all LEDs are on we need 32 amps at least.

How can I provide the appropriate voltage to each led color from a PSU?

I'll use shift registers to control all led channels. How should I connect them and with what type of transistors and be sure that I won't burn anything? 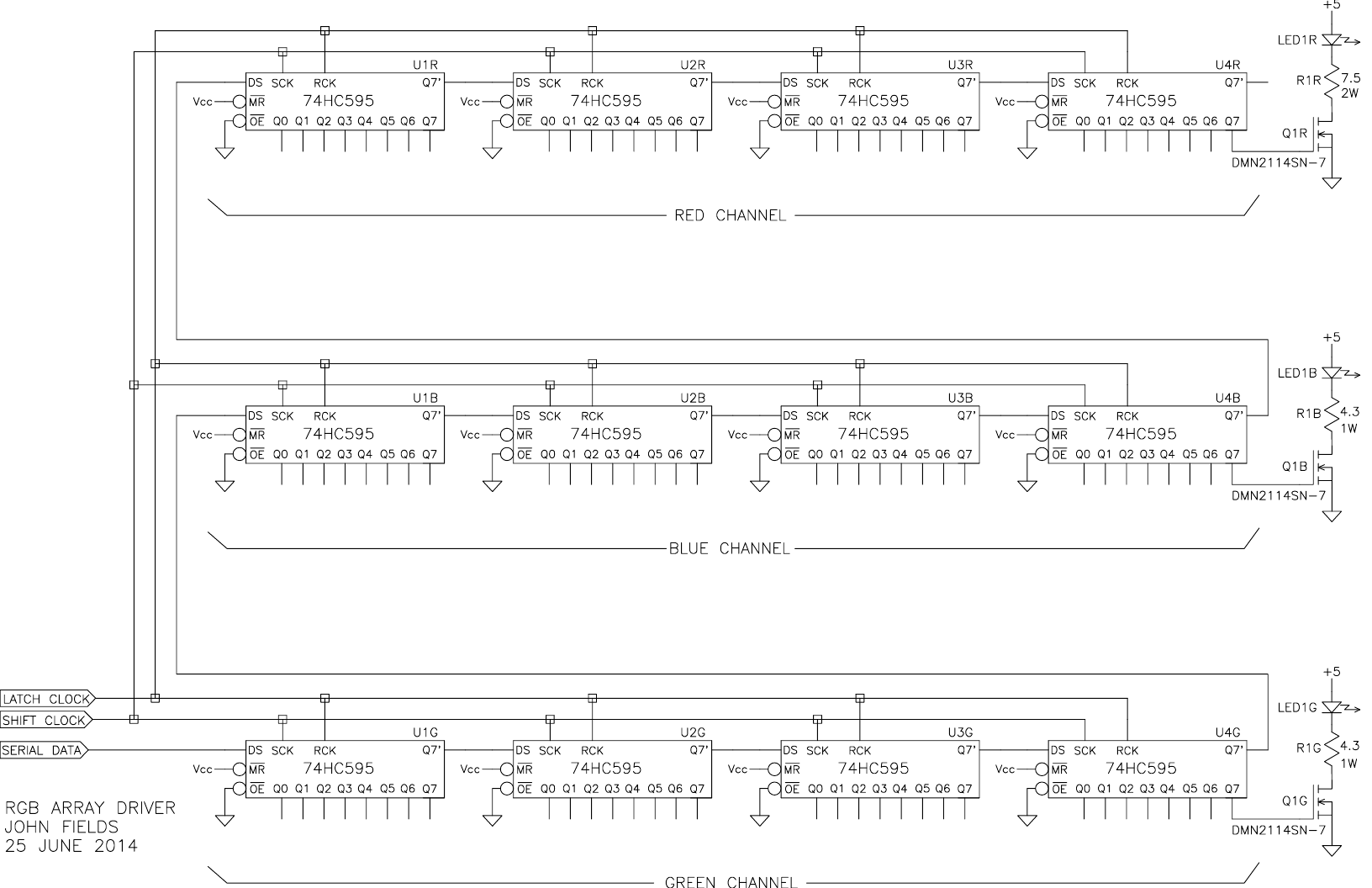 The transistors are logic-level N channel MOSFETs and they should have a drain-to-source voltage rating > 5V. 12V would be nice.

The plan is for them to pass at least the LED If when they're on, and to keep the LEDS nice and bright I'd go for something with an Rds(on) of 100 milliohms or less. That way, the transistors will only be stealing about 12 milliwatts or less from the LEDs and they'll (the transistors) stay nice and cool.

You can use Digi-Key's filters to zero in on what you need and, if you actually want to build the thing, they've got the HC595s as well.

First, you send 96 bits of serial data into the shift register and then, after the 96th serial data clock, you assert the latch (frame) clock.

That'll broadside load all 96 of the data bits into their respective output latches, which will output the signals to the MOSFET gates, turning each of the 96 individual LEDs either on or off until the next frame clock comes along and updates the 96 LED array.

That way, as long as the frame rate is high enough there should be no perceptible flicker from the array.

So how to change colors?

By changing the relative brightness of the three colors in an LED RGB triad/pixel.

So, if all 3 LEDs in a pixel are OFF for, say, one frame, that pixel will be black but if they're all ON the pixel will be white. Over a period of several frames, however, the 3 LEDs can be turned on for some of the time and off for some of the time, changing their apparent relative brightness, and that way change the perceived color from that pixel.

Likewise, the arduino should be connected to its own supply and then the pair's grounds connected to the common ground.

In order to keep the noise on the high current supplies from getting into the HC595s in the columns, a separate 5 volt supply should be used for that logic, and if it's available from the arduino, that can be used.

I want to have full control of 32 (maybe 40) 6-pin 3W RGB LEDs from an Arduino Uno. By saying full control I mean to be able to adjust the brightness of each led independently.

You can use the PCA9685 IC, it is a 16 channels (LED) controller that is controlled via a i2c bus. The http://www.adafruit.com/datasheets/PCA9685.pdf

A circuit description is:

On the i2c bus you can connect several PCA9685 IC's. To drive the LED's you need a MOSFET as LED driver.

A product that fit your need is maybee: http://ledsee.com/index.php/new-products/16-channel-i2c-fet-arduino-schield-pca9685-detail

Not the answer you're looking for? Browse other questions tagged arduino power-supply led high-current or ask your own question.

3
Arduino and LEDs Power Supply Question
11
How do I control several hundred individual leds with Arduino(s)?
2
MM5451 (LED Driver) basics - trouble lighting LEDs
0
Driving High Power LEDs with this circuit
1
High power led driver for COB leds
2
Can I round-robbin high power LEDs to minimize driver channel requirements?
3
Driver selection for high power LEDs
2
How can I dim 50 high-power LEDs in series with an Arduino?
1
What power supply do I need for this LED driver?