This question is related to AVR deprogramming itself.

Project info:
We have a battery powered product using an ATMEGA644P. The application permanently runs in sleep mode and only wakes up once a second (RTC) or when one of the two external interrupt lines is triggered.

The device features a pretty simple boot-loader that is communicating over UART (using RS232 interface IC). Its just serves as a convenience method to update the firmware so that no hardware ISP programmer is required. (The boot-loader expects checksum secured telegrams)

The devices was designed with internal brown-out DISABLED because it doubles the power consumption and long battery life is mandatory (I guess that an external brown-out detection should have been used - a re-design is in work).

Problem:
Every few month a device just stops working, there were NO firmware updates performed on those devices. However, after further examination, the flash contents of those devices seem to be corrupted. Furthermore, the batteries of some of those devices were still good, but I don't want to rule out some kind of under-voltage situation.

This is a comparison of the original flash contents (left) to the corrupted contents (right): 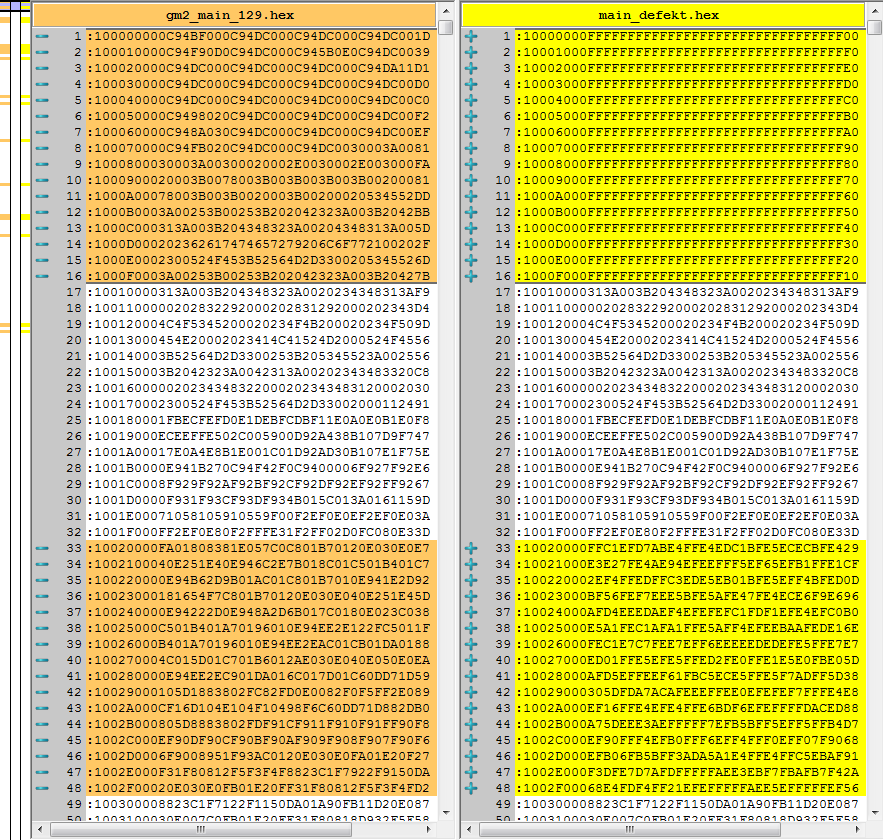 It is totally plausible that an under-voltage condition while writing the flash memory can corrupt flash contents. However, this would mean that some flash sensitive instructions have to be executed.

Maybe the controller is randomly restarting due to under-voltage and the boot-loader code is acting entirely unpredictable during this time. To quote some guy from another forum regarding under-voltage:

Question(s):
Do you think the "random behavior during under-voltage and executing some instructions changing data in flash pages" - explanation is sound? If that is the case, why don't we see this kind of errors all the time just as a cause of some software issues (stack overflow, invalid pointers).

Do you have any other ideas what could cause this kind of corruption? Could this be caused by EMI/ESD?

You should notice that the flash is not written, it is erased. An erased flash is full of 0xFF. Your first 256 bytes are totally erased, your third 256-bytes region is partially erased (you only have 0 to 1 bitflips from correct data to corrupted one).

According to the datasheet, this flash is page-erasable (I usually work with erase-blocks bigger than the pages). As seen in page 282, Performing Page Erase by SPM is pretty easy.

You may be interested by section 23.8.1 ( Preventing Flash Corruption ) :

A Flash program corruption can be caused by two situations when the voltage is too low. First, a regular write sequence to the Flash requires a minimum voltage to operate correctly. Secondly, the CPU itself can execute instructions incorrectly, if the supply voltage for executing instructions is too low. Flash corruption can easily be avoided by following these design recommendations (one is sufficient):

This is a well known problem, and affects many microcontrollers (not just Atmel). The flash memory control hardware corrupts or erases part of the memory under low voltage conditions. The simple fix is to enable brown-out protection.

You should always enable brown-out protection on microcontrollers as a matter of course.

Note, that the faster the processor runs, the more sensitive it is to under-voltage problems. If lowering the CPU frequency is an available option to you, it might be worth a try.

EMC will be your biggest enemy, if one doesn't follow the main rules of PCB design. Here are the most important ones from my own experience: - blocking capacitors on any IC, regardless of what the manufacturers tell you in their datasheets about infernal schematics, put at least one between 100pF - 1nF on each IC's power lines - conducting ground areas on each PCB's layer as much as possible. Those areas shall be contacted through all layers via vias as often as possibe, a grid oft 50mil is a good value. Connect those areas to ground signal. - Never leave unconnected (floating, to no signal connected) copper in your PCB. It acts like an antenna and devinitifely puts electro-magnetic radiation onto the devices - make traces carrying clock signals as short as possible

Not the answer you're looking for? Browse other questions tagged microcontroller avr atmega flash failure or ask your own question.

5
Best practices for production programming of data/NAND flash devices
6
Difference between data retention in flash and in EEPROM
1
Datalogging on serial flash memory
2
Memory architecture and instruction storage - Naimi: AVR Microcontroller
0
Dumping TSOP48 flash
4
Why do I have more flash (STM32F103RCT6) than what my datasheet says?
3
Is it possible to rewrite a Flash page after an interrupted write?
1
Trying to understand the FLASH region of an STM32L433