What is the reason my ULN2003A overheats?

I'm driving some 12v fan motors from a microcontroller using ULN2003A Darlington array. Both total wattage and per-channel wattage are way below ULN2003a limits. Still, I found that when PWM duty cycle is below 20%, ULN2003a starts to get really hot (can't touch with a finger). At higher PWM duty cycle temperature is much lower.

Update: Fans draw around 0.2A each, and the PWM frequency is 32 kHz currently. The capacitors are there to reduce the audible noise (I was using lower PWM frequency initially).

Am I correct in suspecting that the heat source is the flyback diodes, and not the darlingtons?

I'm thinking of adding some external flyback diodes across the motor coil. Is this the corect thing to do in this situation? I have some 1N5818DICT on hand (Schottky diode 30V 1A, Recovery < 500ns). Will such diode be ok, or I I need something special? 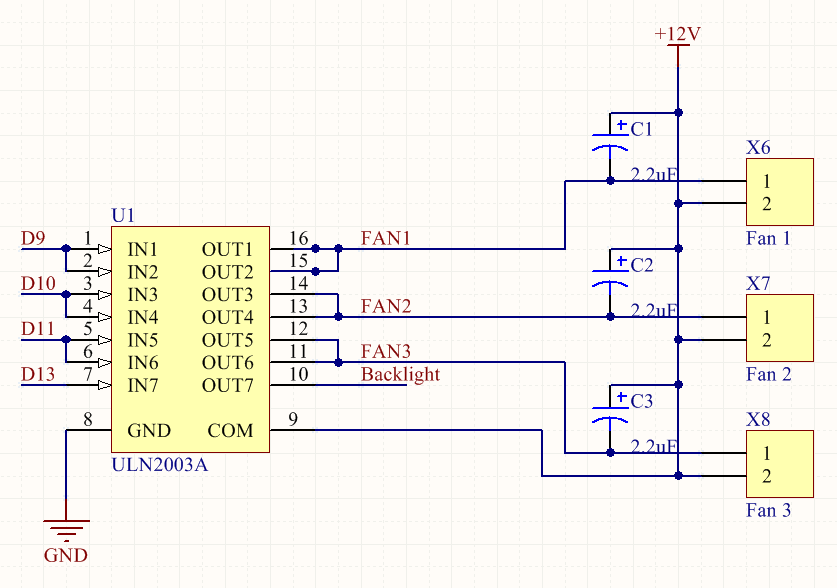 PWM frequency is 32 kHz so that's a period of about 32 us and half that time the transistor will be dumping energy into charging up those capacitor. It'll be doing it totally inefficiently too so maybe half that energy again is wasted in transistor heat.

BUT because charging the cap is done totally inefficiently, at a guess, the transistor will throw away just as much energy. It does this 32,000 times per second so that's a power of about 5 watts per transistor.

Now I may have over-egged this a bit by assuming that each 2.2uF would become totally discharged in one cycle of PWM but I'd wager that each transistor is doing over a watt just driving these capacitors back to full charge (32,000 times per second). Get rid of the caps and if you still have problems with noise then come back and tell us.

The lower the duty cycle the worse this will be because there will be a longer time for these caps to discharge and hence inefficiently re-acquire more of their 0.158mJ when the transistor switches back on again.

At high duty cycles — which means high fan speed — the back EMF of the fan keeps its capacitor from discharging significantly. However, at low duty cycle values, the capacitor discharges most of the way.

In the worst case, it discharges completely, which means that it needs to be recharged each time the Darlington turns on. The charge is 2.2 µF × 12 V = 26.4 µC. Done 32,000 times per second, this represents an average current for the capacitors alone of 845 mA.

Keep in mind that VCE for these Darlingtons is on the order of 1.5V at this current level, so the transistor pair for each motor is dissipating about 1.3 W.

When you increased the PWM frequency, you should have reduced the capacitor values proportionally. You should probably get rid of them altogether.

Not the answer you're looking for? Browse other questions tagged pwm flyback or ask your own question.

12
How do I eliminate PWM noise when driving a fan?
0
High Side PWM motor driving circuit
2
Connecting a galvanometer directly to a microcontroller's PWM output
1
How to work out if a diode's reverse recovery time is good enough?
0
Flyback simulation - not regulating at lower load
5
Can PWM affect a brushless DC fan given sufficient time?
3
Two-Channel PWM LED Driving at 12A Load Issue (Signals affect each other)
0
Schottky diode as a flyback diode with PWM?
1
Controlling Proportional valve with NPN transistor (TIP 122) using PWM
1
What happaned when the flyback transformer is in saturation?