How can I add a power-off delay to this circuit

This may seem simple but I am trying to learn EE. In the below circuit, how can I add a delay when the button is released the relay will stay energized for approx. 5 seconds.

As I mentioned I am learning. My initial thought was a resistor–capacitor circuit (RC circuit). But I am not sure how to achieve this. Thank you for the help.

Edit - as suggested I added a schematic. I hope its correct. 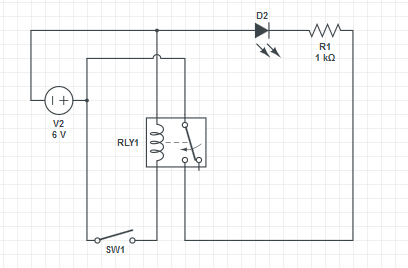 The brute force answer is to put a capacitor accross the switch. That will allow current to keep flowing for a while as the capacitor charges up. However, this is not a realistic answer since the capacitor would need to be very large and the switch would end up shorting it when closed. This would send a large pulse of current thru the switch which would probably either vaporize or weld its contacts.

A better way is to still use a capacitor, but in a circuit that controls the relay current instead of providing it outright. I don't have time right now to work out all the details, but here is a basic topology:

I have to go now. Perhaps someone else can put hard numbers on this. It may be convenient to use a second transistor to provide more gain between the capacitor current and the relay coil current.

As I said above, that was a quick and dirty circuit which should have given the OP what he wanted, and matched his apparent level of expertise. For some reason, EMFields renewed his nagging about this admittedly simple circuit 1½ years later. I was originally just going to ignore it, but then decided this might be a good teachable moment about how to do something like this with "snap action" using only a few discrete parts:

Q2 does the actual switching of the relay. In this example, I assumed a relay that requires 50 mA of coil current.

D1 and R1 conduct for a short time after the relay is switched off. The relay coil has considerable inductance, so can't change its current instantaneously. When the transistor switches off, there has to be a safe path for this current to take, else it will make a high voltage and blow out the transistor. R1 will develop about 6 V across it when the full coil current initially flows thru it. This reverse voltage will decrease the coil current quickly, turning off the relay quickly.

These transistors can be counted on to have a gain of at least 50. To make sure they are solidly on and to leave some margin, I aimed for a base current roughly twice what it needed to be, or 1/25 of the collector current. When Q1 is on, there will be about 2 mA of current into the base of Q2, which will turn on the relay.

To turn on the relay therefore requires turning on Q1. With the left end of R6 held at 0 V, more than enough current will flow out of the base of Q1 to turn it solidly on. Closing the switch essentially shorts the left end of R6 and the bottom of the capacitor to ground. The purpose of R2 is to limit the large current that would otherwise flow thru the capacitor when the switch is first closed. This could damage SW1, and large current transients will cause noise and other problems.

When the switch is opened after having been closed for a while, the capacitor is fully charged. It will stay that way in the short term, keeping the relay on. Eventually the capacitor will discharge enough thru R6 to no longer keep enough voltage across R6, which causes insufficient current thru R6 to keep Q1 on. That turns off Q2, which turns off the relay.

However, that turnoff will happen slowly. R5 is a little positive feedback to make it "snap" off. When the Q2 first starts to turn off, its collector voltage will rise. Due to R5, this makes the base voltage of Q1 rise just a little, which turns it off more, which turns Q2 off more, which makes the Q2 collector voltage go higher, etc. This type of positive feedback is also called hysteresis, and provides a fast transition from the on to off state once turning off starts.

The off delay timing is mostly a function of C1 and R6. The exact delay is a bit hard to predict because it depends on the gain of the transistors, particularly of Q1. The easiest way to get the desired delay is to try a value of C1, then adjust up or down by experimentation. The 47 µF I show is as good a starting value as any.

For a more predictable delay, a resistor can be added across C1. There are of course various ways this circuit can be tweaked to get even more features, but it gets silly at some point.

In the real world, especially when delay accuracy matters, this would be done with a microcontroller like the PIC 10F200. The switch would be connected between ground and one of the input pins configured with a internal passive pullup. The firmware would do the debouncing of the switch, and produce a digital signal that would transition effectively instantaneously between high and low. This would be connected to the base of Q2 via a resistor that allows about 2 mA to flow when high. R3, R4, Q1, R5, R6, R2, and C1 would all be eliminated.

While you didn't provide a schematic, tsk, tsk ;) it's pretty obvious from your text what you were trying to accomplish with that relay, switch, capacitor and resistor.

Here's something that'll do what you want: 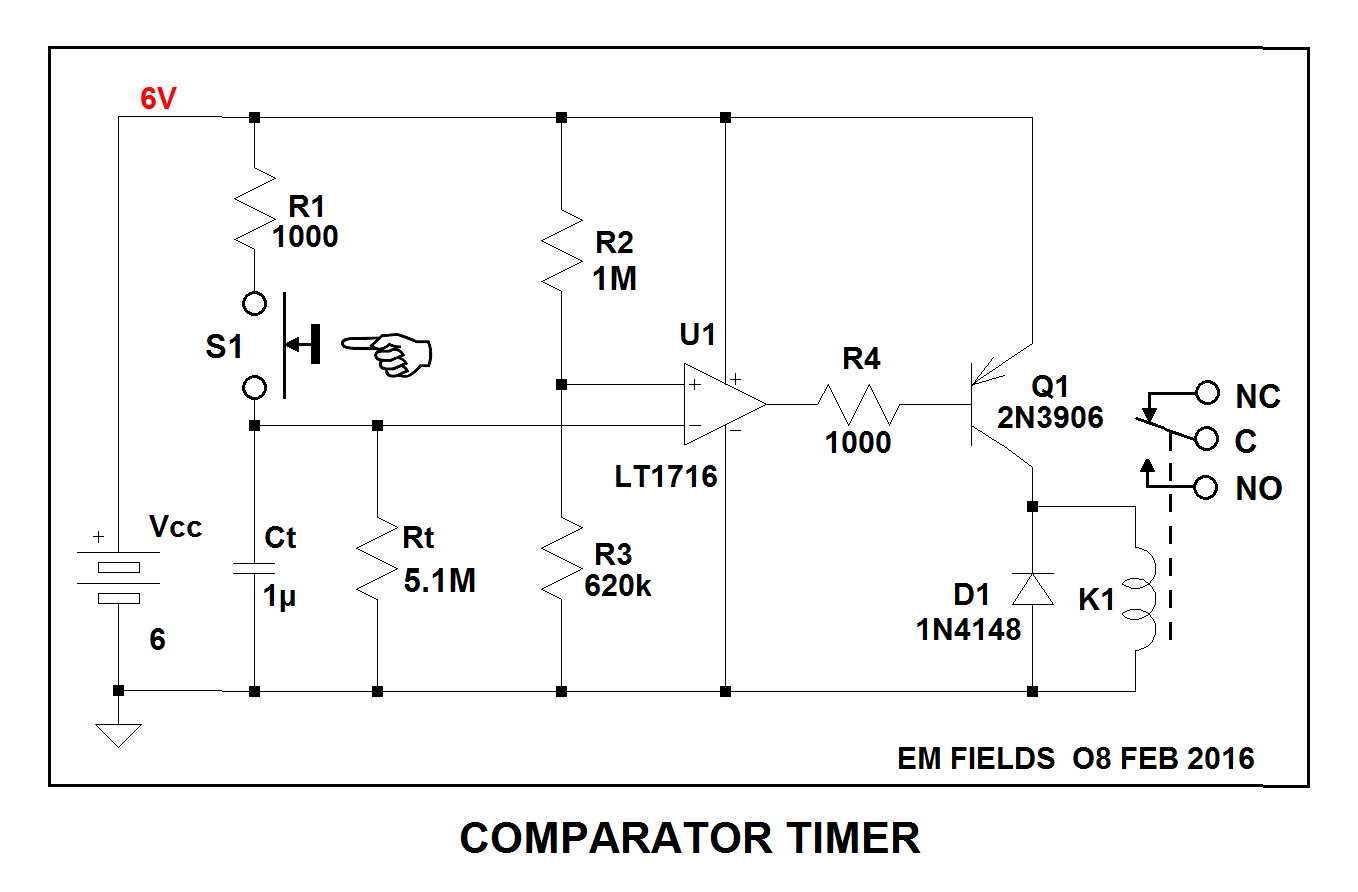 When S1 is made, Ct charges to nearly Vcc quickly, through R1, and when its voltage rises to the point where the voltage on the inverting input (-) of U1 is more positive than the voltage on U1-, U1's output will go low, turning Q1 ON.

That'll energize K1 and cause its common (C) terminal to disconnect from the Normally Closed (NC) contact and connect to the Normally Open (NO) contact for as long as S1 is made.

When S1 is released its contacts will open and Ct will discharge through Rt until the voltage on U1- goes more negative than the voltage on U1+, at which point U1's output will go high, turning Q1 OFF and de-energizing K1, which will disconnect C from NO and connect it back to NC.

If a charged capacitor is discharged through a resistor in parallel with the cap, the voltage across the capacitor will decay to \$\approx\$ 37% of the charged voltage in one time constant, that time being equal to:

where t is the time in seconds, R is the resistance in ohms, and C is the capacitance in farads.

The choice of either R or C is arbitrary as long as the RC product equals the desired timeout, and I tend to prefer smaller capacitances as long as the resistances don't get outrageously large so, for this application, I chose 1 microfarad for Ct and 5.1 megohms for Rt as a comfortable compromise. The capacitor should be something other than electrolytic in order to keep the cap's leakage current from competing with the discharge current through Rt.

Next, since the switching point will be about 37% of the supply voltage (which Ct was charged to [the supply voltage] before it started being discharged), U1+ needs to be set at about 2.2 volts.

That voltage will be provided by the the voltage divider R2R3, and since it'll be drawing current from the supply all the time, I chose 1 megohm for R1 to keep the drain small- around 6 microamps.

to solve for R3 we can write:

560k and 620k are the closest E24 values and either would probably be OK for imprecise RC timing like this.

Just for grins, here's the LTspice schematic and plot; the green trace is S1 being pushed and released, and the red trace is the current through the relay coil.

The LTspice circuit list follows just in case you want to play with the circuit. 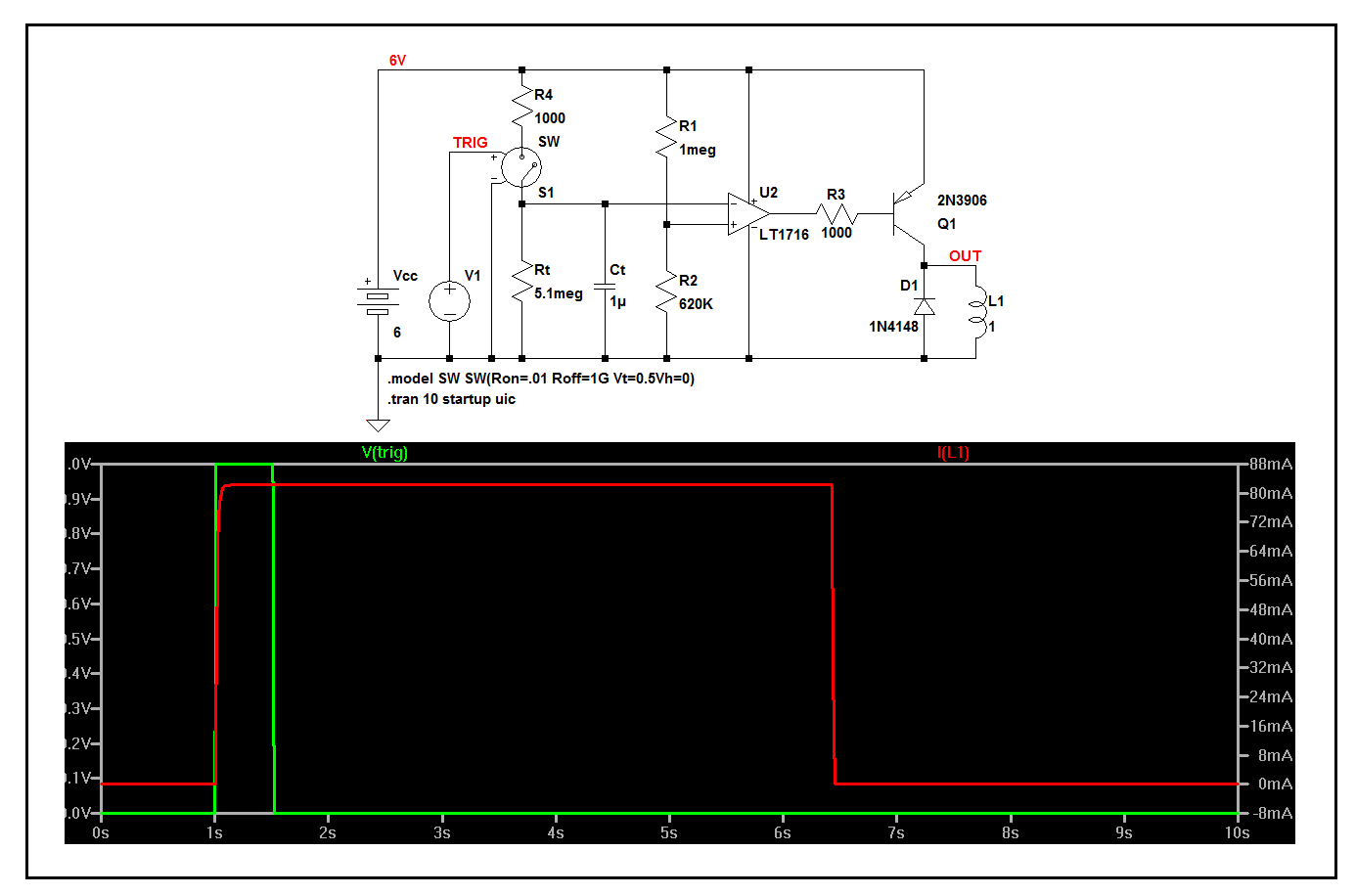 There are better ways,but, for a start try adding a capacitor from the junction of switch + relay coil to ground.

How large a capacitor is needed will depend on how much current your relay draws.

What is the rated operating current? 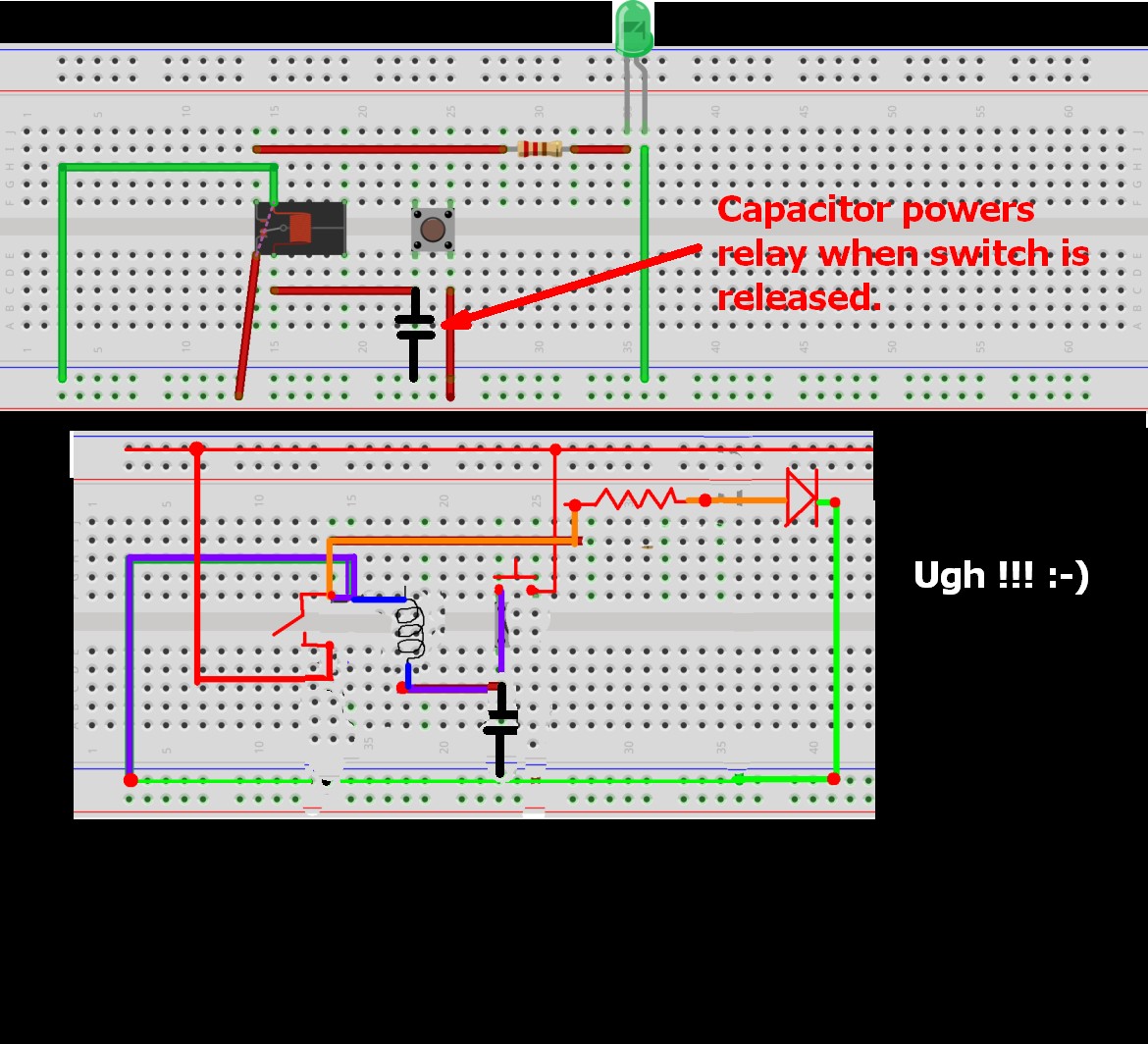 Not the answer you're looking for? Browse other questions tagged relay delay or ask your own question.