I'm eager for help in figuring out why all the microcontrollers I'm using are dying randomly. At first, I was using LPC810Ms and LPC1114FN28s (both DIP packages on a breadboard), so I overlooked the problem since plugging in a new one was no big deal. But now, I'm using STM32F437s (100 QFP package soldered on a prototyping board), which at $17 a piece, and requiring a fair amount of soldering, makes replacement pretty expensive.

My power supply is pretty unconventional. It's an Antec HCG-850M computer power supply with the under voltage & over current protection removed, so I can run RC car motors without tripping. As a result of removing UVP & OCP, I noticed turning off the switch results in a very gradual voltage decay (takes > 10s for the voltage to reach 0). Could this be breaking the MCUs?

In general, the only peripherals I have connected are a Segger JLink for ARM debugging and a UART.

I'm not expecting a too specific answer, so please share any relevant experiences.

Correction: the voltage doesn't take 10s to die off (that was a guess based on how long it took the lights & fan to turn off). Instead, it drops instantly after 5 seconds. 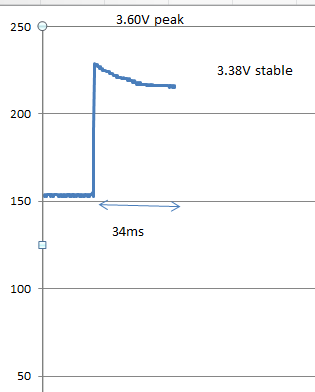 (only colored pins are connected) 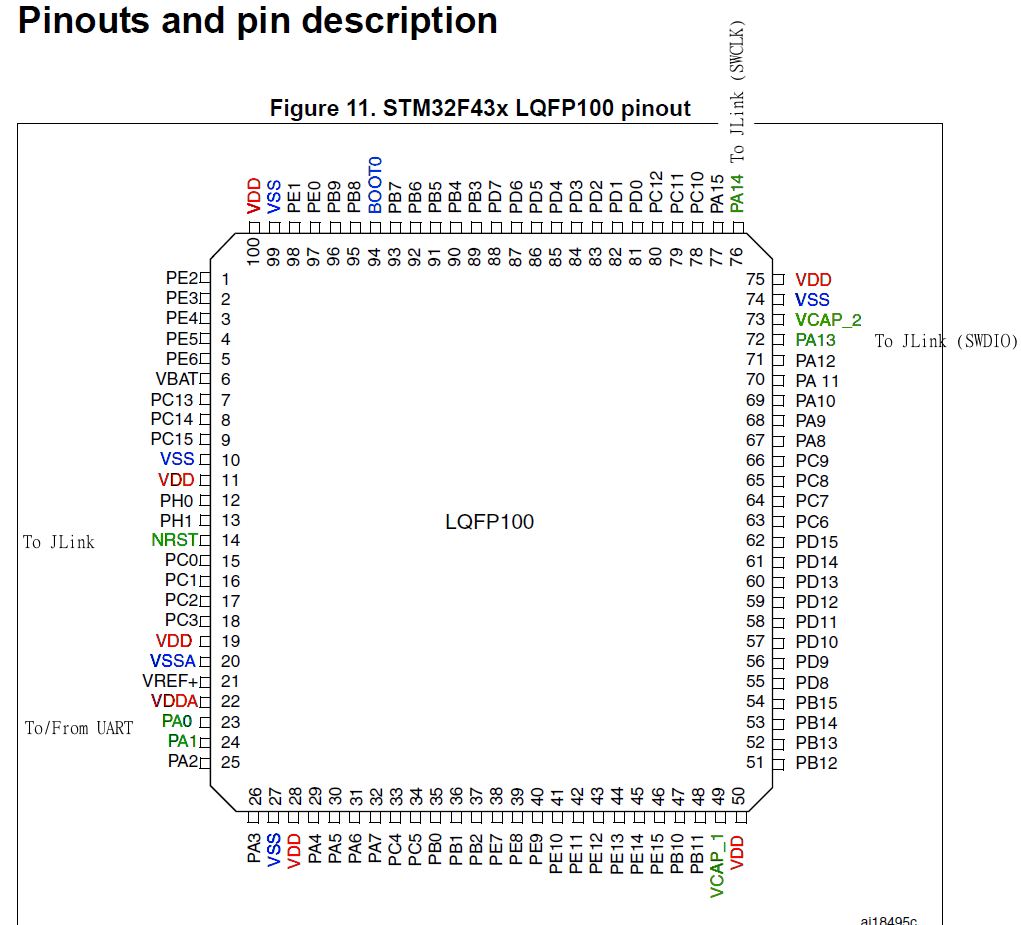 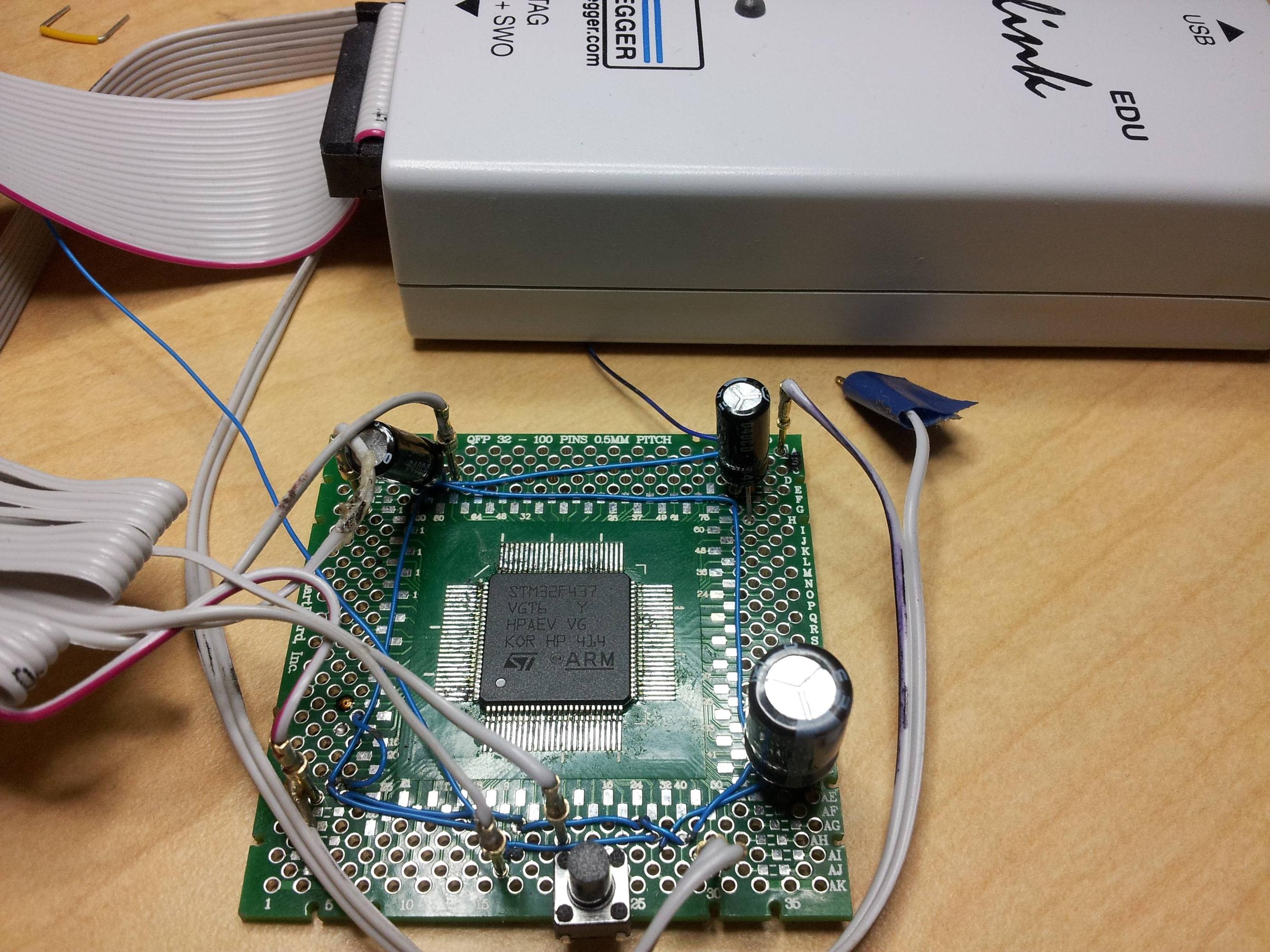 Finally, I've found the problem! but not the real cause. Thanks to clive1 on the ST forum thread, STM32F4 - Discovery fail, I resurrected the chip by switching the BOOT pin to 1, so it boots from RAM, instead of Flash. So it wasn't dead - just bricked (don't understand why the debugging interface depends on working Flash)

So now I'll make my question more specific: Why is the MCU's flash memory getting corrupted on powerup, powerdown, or resets? Also, forget about the LPC MCUs.

There are several reasons why microcontrollers would act as described above. The three most common causes are:

To fix these issues, try the following:

The problem you are facing most likely stems from one of the above problems, so check through them and see if they help.

Kind of sounds like you're latching up the chips. This is a result of momentary high currents into inputs or outputs, which could be caused (easily in a high current circuit) by improperly routed ground currents which cause transients in excess of a few hundred mV. It could also be caused by transients on the supply line.

The most bullet-proof way to deal with this is to galvanically isolate the inputs and outputs of the microcontroller from all the power circuitry. Also used twisted wires and keep them physically separated so the load can't induce too much current in the wrong places. Of course you should use a separate supply for the micro.

Electrostatic Discharge or ESD might be the cause for this random failures. After looking at the datasheet the ESD maximum rating for the human model is only 2000V and ever lower voltages for the charged device model depending on the conditions, which makes killing the processor due to an ESD event a very likely scenario. I would recommend avoiding handling of the unit as much as possible, the use of a properly grounded wrist strap, as well as a anti-static mat on your work area.

Possibly your supply doesn't have a bleed off resistor. Experiment with a shunt resistor in the range of 10k to 1M and see how that improves that slow safe after powerdown. Pay attention to the supply sequence in the datasheet, if it exists. As a previous poster mentioned, you could possibly latchup the device with a bad power up or power down.

Do you have any input protection network on the supply pins of the uC? It should be standard to put a fuse, shunt zener or tvs, and sufficient bulk and bypass capacitance.

The power supply you're using could be throwing transient spikes that you aren't seeing, although it's not clear if you have a scope or something.

Also, do you have any floating inputs anywhere? A schematic would help.

Not the answer you're looking for? Browse other questions tagged microcontroller damage or ask your own question.

8
L3G4200D random spikes
2
Power cycle error when trying to program/debug HCS08 MCU
29
Is it possible to physically destroy a microcontroller with software?
2
How do MCUs and RAM wire up for programmatic access?
2
Understanding ROM/RAM in ARM MCUs
6
STM32 Sleep Mode: Interrupt gets executed but the CPU stays in WFI
0
AT90CAN128 Random Malfunctions
0
Relating RAM usage with stack allocation and random resets in a microcontroller
0
Microcontroller PIC32MX