Two or more different regulators connected to one battery

I want to make batteries provide power to both a micro controller (Raspberry Pi) and a 4x4 LED matrix. A simple circuit diagram is shown below. (only one LED is drawn in the fig. But regard it as LEDs in series and parallel.)

In reality, is it possible to connect 7805 and 7809/7812 to the batteries simultaneously? Current up to 16 mA will be required at the LED matrix.

Is there any important things I need to consider? 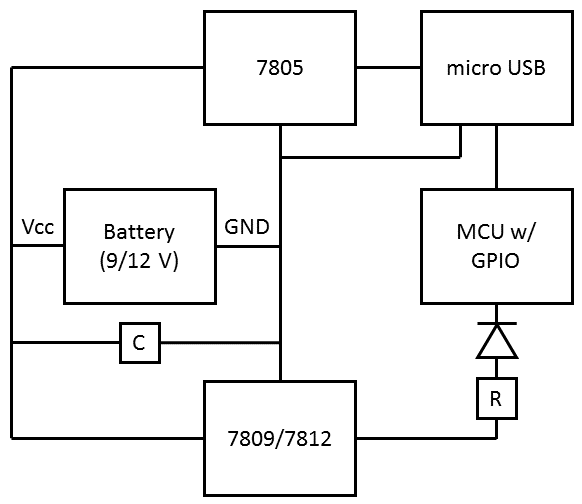 Yes, two or more linear regulators can be powered from a single voltage source. However, the arrangement shown in the question will not work: A linear regulator requires some voltage headroom over the nominal output voltage, to work.

This adds another issue: The greater the difference between input and output, the greater the heat dissipation by the linear regulator, for any given load current. Thus, with a 14 Volt input on the 7805, with 100 mA of current to load, the regulator will need to waste (14 - 5) * 0.1 = 0.9 watts as heat. This is not a huge figure, no doubt, but will need a suitable heat sink.

For dual rail output requirements such as this, a good solution is a low drop-out linear regulator such as the OnSemi CS8161, which has 12 Volt and 5 Volt outputs, and a 0.6 Volt maximum required drop-out voltage - so it can be operated from a 12.6 Volt or higher supply.

Not the answer you're looking for? Browse other questions tagged led voltage-regulator raspberry-pi gpio or ask your own question.