Can I connect all ground connectors via the ground fill?

I am working on a very, very simple two-sided PCB design that connects one 8-pin header with 6 audio jacks, each of which has its right channel and ground connected.

All grounds are connected via lanes, but it seems like I could also use the copper ground fill for that.

Can I do this or could it cause possible harm?

For reference, the board I'm working on:

The orange lanes are ground and on the bottom of the board. The yellow ones are on top. Copper fills are left out. 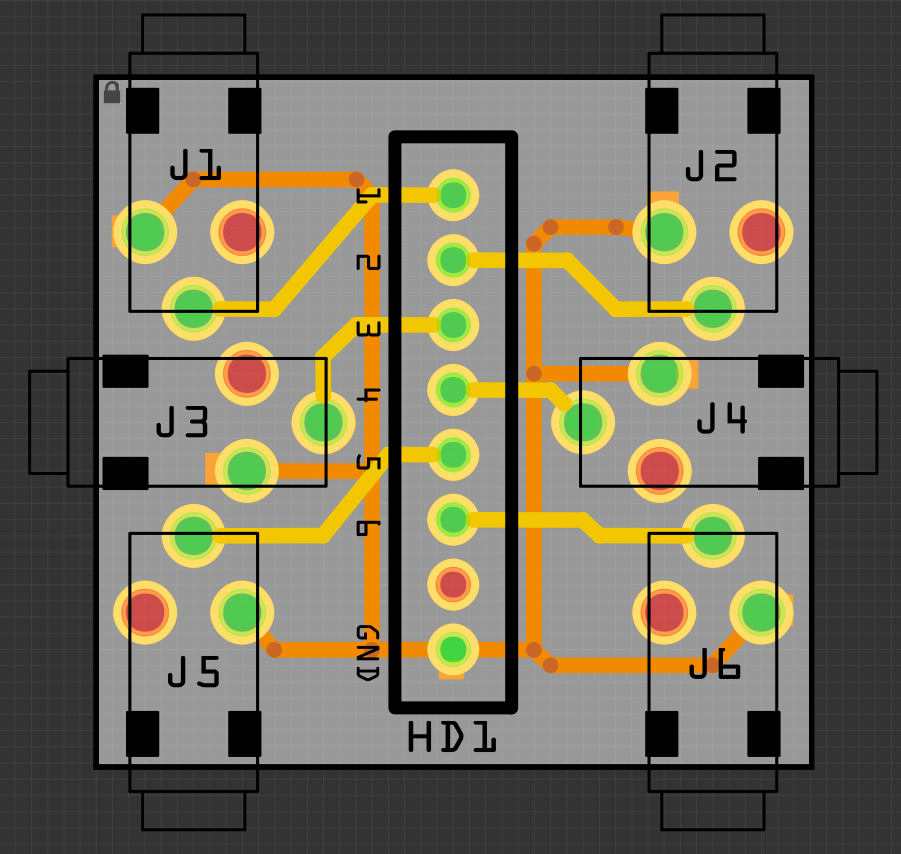 All your GND are already connected together. Thus the question is would a copper fill change anything?

Part of the answer comes from understanding the difference between your routing and one with a copper fill.

A single copper trace can be modeled as a small inductor. It also has some resistive behavior. If you replace your traces by a GND fill, that inductive behavior would be reduced as well as the resistive one. Is this a good thing? Usually yes.

The concept of GND is to have a common reference across the system. The better your GND is, the better your reference is. Thus it's often a good thing to reduce the cause that would create voltage differences in your GND. Reducing the resistance (DC effect) or inductance (AC effect) would make your GND more "solid" thus better.

But this is not the only thing to consider here. Other factors are:

I am sure there are other considerations. But in summary, it should not hurt to use GND fills.

Not the answer you're looking for? Browse other questions tagged pcb grounding routing or ask your own question.

2
Can ground plane EMIT noise?
1
Audio Switch Board Grounding
1
Altium Designer PCB project Ground fill polygon cant connect to one of same net component pad
1
Altium Unrouted Net in Fill
2
Advantages/Disadvantages of ground fill on both layers (of a 2-layers-board)
9
Why are ground pours isolated from each other on the top layer?