I have a small light bulb (3W LED, E27/110V) that I am controlling using based on ambient brightness (it comes on when it is dark, and goes off when it is light). The circuit uses a BT136 triac, a MOC3041 optoisolator, and an IR phototransistor (I don't have a part number for it - 2 pins, black cap, looks like an LED).

However, I have one issue with it:

The circuit is currently located fairly close to the light (around 1.5m under it - but the light faces upwards). When it gets dark enough, the light turns on and the light it produces turns off the phototransistor causing the light to flash. The light continues flashing for around 5 minutes (at varying frequencies), before it remains on. This implies that it doesn't take much additional darkness to offset the added light from the LED bulb. I chose the value for R1 that would let the light turn on at the appropriate time, and R2 is currently set around 50kohm (altering R2, changes the on time, but doesn't appear to help the flicker).

My indicator LED (D1), transitions to on when current through Q1 drops below 1.6uA to 1.3uA. (I am not confident enough in my meters to fully trust that number, but hopefully it provides an idea of the magnitude). In full direct sunlight the current through Q1 is up to 40mA.

Ideally, I would like to resolve this as simply as possible (e.g. with a minimum of ICs), however, my knowledge of electronic circuit design isn't yet where I want it to be in order to know the best course of action from here.

What would be the best way to resolve the flicker that occurs at dusk when the light turns on?

You need to introduce some hysteresis (positive feedback) into the circuit.

This is done, below, by connecting the collector of Q2 to the base of Q1 through the network R1 R2 R3. You'll probably have to fiddle with the resistor values in order to make it work with your phototransistor.

I simulated it with LTspice, and if you want to play with it, the circuit list is here. 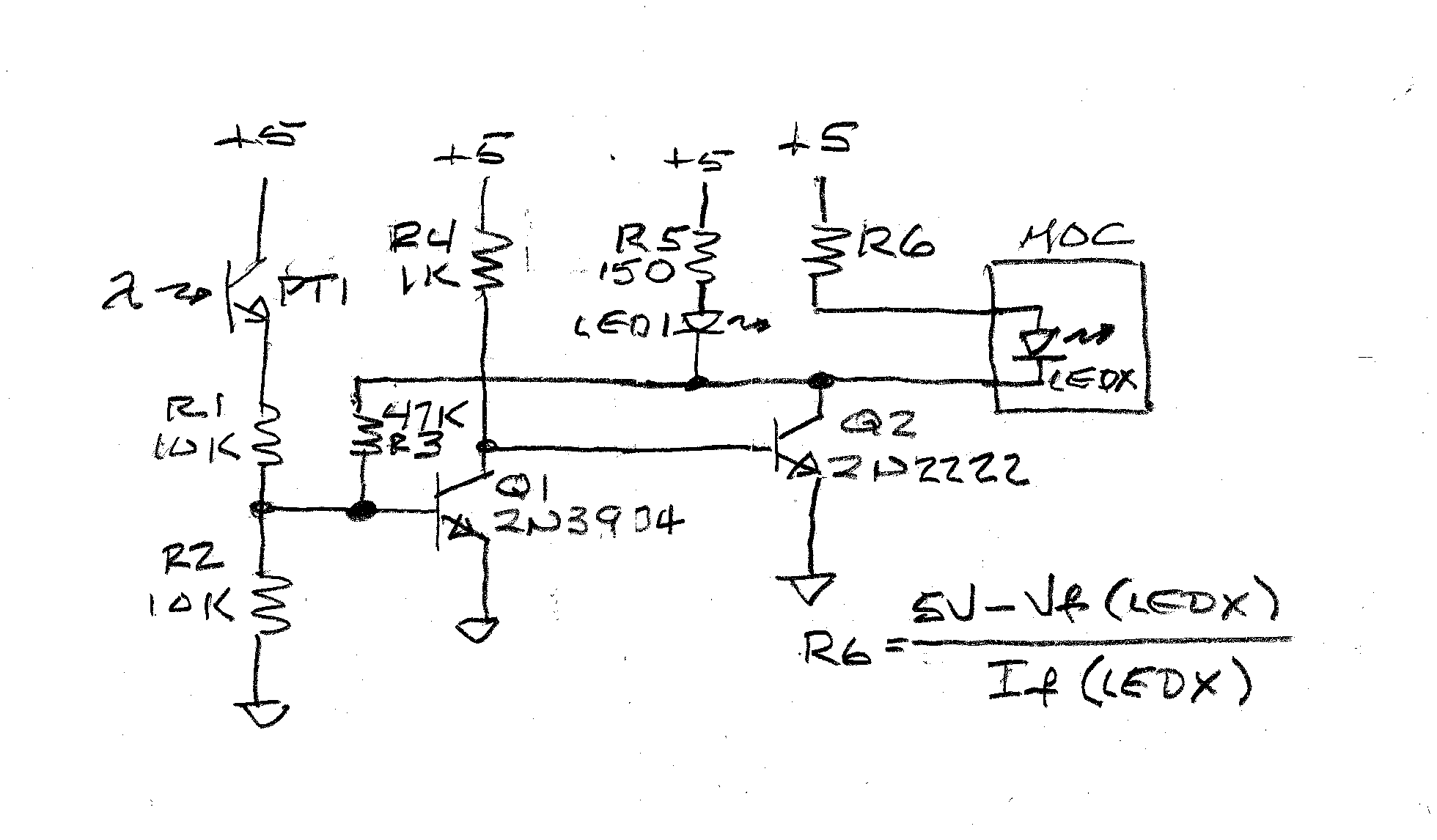 U1 is an opamp functioning as a comparator with PT1 and R1 used to set the voltage on U1- to half of the supply when PT1 is illuminated enough to make its resistance equal to 1.2 megohms. R3 R4 and R5 are used to set PT1's low illumination trip level, with R3 and R5 limiting R4's range from about 2 to 3 volts, and R7 is used to provide hysteresis around the comparator and set the low and high switch points for the illumination incident on PT1.

The circuit has been simulated, appears to work nicely, and the LTspice circuit list is here. 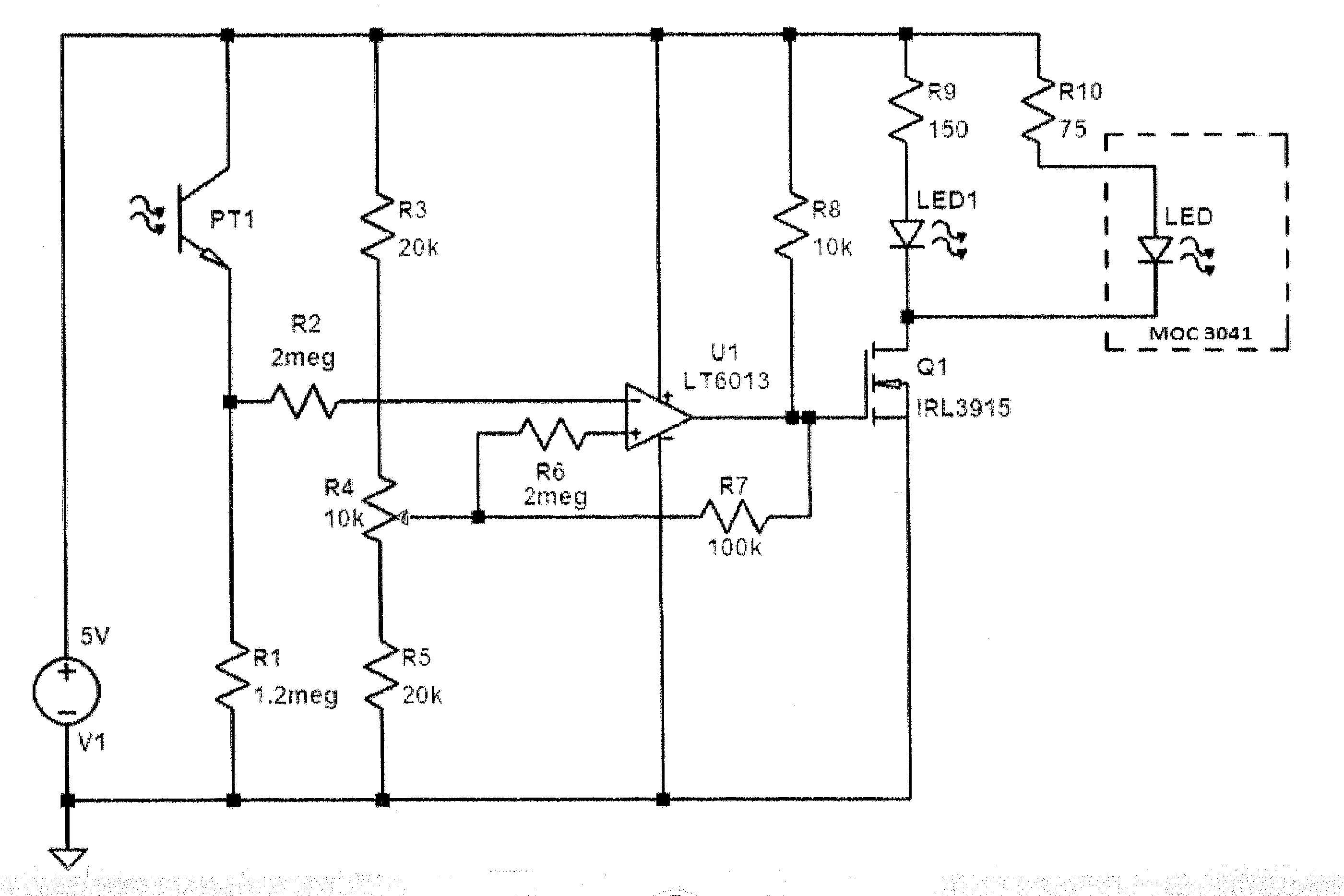 You want hysteresis. Hysteresis is the same thing that keeps your thermostat from switching on and off every few seconds when the ambient temperature is very near the setpoint. Hysteresis can be implemented many ways.

You could introduce a delay after a state change. That is, when you change states, inhibit further changes for some time. This will at least limit the rate of the flashing. You might implement this with a microcontroller or some sort of discrete logic and a timer like the 555.

Place a resistor from D2 anode to base of Q2. Without knowing the specifications of your photo sensor (Q1), I cannot say what value of resistor. Perhaps 100K to 3 M-ohm. This will be positive feedback, which gives you the Hysteresis as mentioned by Phil Frost.

Alternatively you could place the resistor from collector of Q3 to base of Q2.

Not the answer you're looking for? Browse other questions tagged triac phototransistor light-sensor or ask your own question.

5
Light sensor using Photo Transistor
2
Are IR phototransistors always dark, are IR LEDs always clear?
1
LED light bulbs flicker when switched off - where does the energy come from?
1
LED bulb flicker @ rate of 50 Hz or more
5
Which is the phototransistor in Lesson 11 Evil Genius?
0
How to avoid LDR controlled light self-latching?
0
Triac gate burns after getting current on it
0
Add tilt switch to this photodiode circuit
2
Very low current (<10 microamps) darkness detector circuit that turns off in light
2
How to detect IR pulse using phototransistor and voltage comparator (subtracting constant light)