I've built the circuit in the schematic below to control my TV, the D1 and D2 LEDs are the two mini LEDs from this IR Extender: 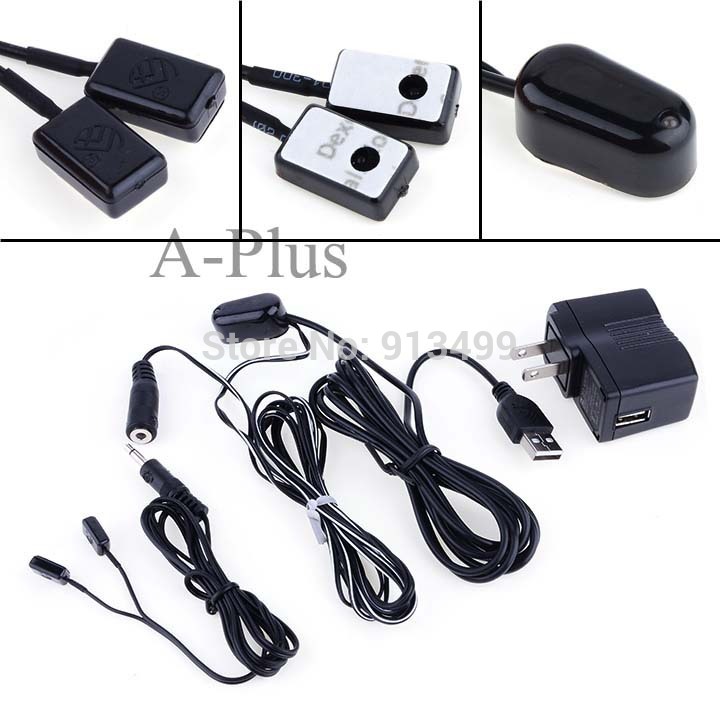 I've cut it below the female headphone jack and I'm using my Raspberry Pi using LIRC to send commands. 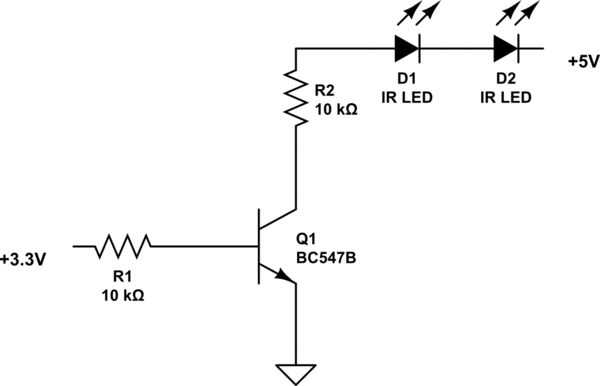 Everything works great except that I'm not sure about the two 10k Ohm resistors.

For the BC547b transistor I saw the max mA for the base was 100mA so I thought that for the 3.3V an R1 of 70Ohms would be about 47mA and would be safe. However when playing around with it more I found that even with the 10k Ohms resistor (0.33mA) it still worked.

Would this 10k resistor be safe to use and not cause any issues that for example the current is too low, or should I stick with the 70 Ohm resistor? Better would probably to actually calculate the best R1 value?

With the LEDs (R2) I just tried a number of resistors and the 10k Ohm still worked and isn't too bright as with for example a 2.7k Ohms resistor. Could the 10k resistor influence the lifetime of the LEDs?

High current flowing through the LEDs can reduce the life time. So choose \$R_2\$ wisely. The datasheets of LEDs will give the current ratings.

Your circuit is not good.

Not the answer you're looking for? Browse other questions tagged led transistors resistors raspberry-pi infrared or ask your own question.

0
LED lights behave strangely, why?
0
Using 25 IR LEDs with Raspberry Pi and Transistor
1
How to determine watts and ohms for circuit board resistors?
1
Different voltage drop in serial and parallel circuit with resistor
0
How does the size of a resistor connected to an input of a NOR gate affect it?
4
What resistor should I use after changing this LED from using 220v to using 5v arduino?
0
Calculating a resistor for a transistor
0
How to measure and power an array of unknown RGB LEDs?
0
Is it ever a good idea to rely on wire resistance instead of a proper resistor?