few days ago i bought few (about 500) resistors and i noticed that they have 5 color bands instead of 4. My question is how do i count them (which color is the tollerence) and how should i put them? Do they have a good or bad orientation like + or - ? I tried to use an online calculator but i dont know the first and the last band. 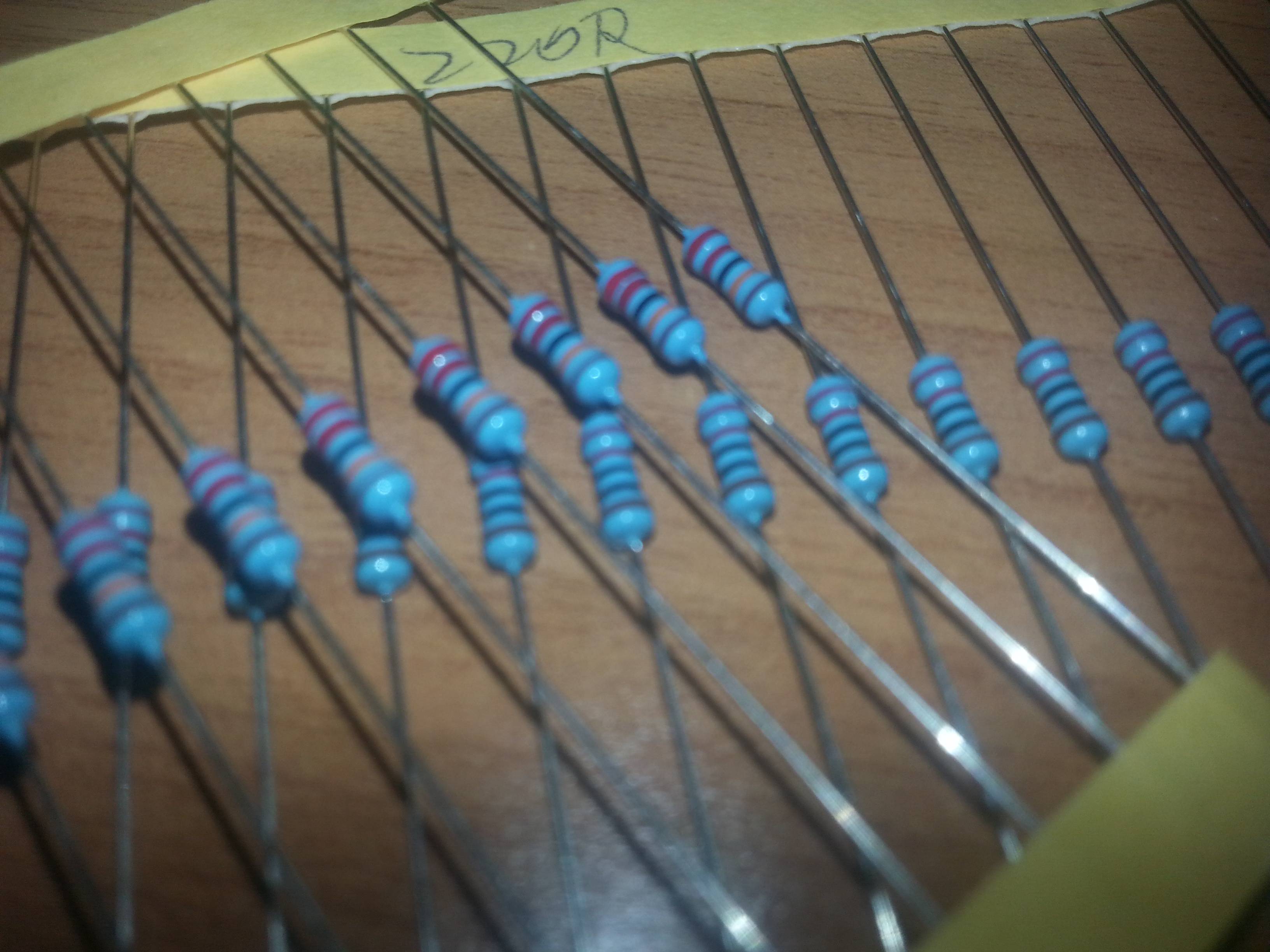 There are only two possible ways to read the resistor's color rings right to left or left to right. One of the two outer rings is the tolerance ring, the other rings indicate value. As others have stated, there is often a subtle difference in (location of) the tolerance ring, but not always too clear. https://en.wikipedia.org/wiki/Electronic_color_code#Resistor_color-coding For cheap and easy to find resistors, the tolerance ring is often gold (5%, 4 band, E12) or red (2%, 5 band, E96)

If you have no clue about value nor tolerance you can decode both possibilities and then check them against the E96 preferred numbers. The one that matches E96 is the correct value. http://logwell.com/tech/components/resistor_values.html

Of course you may want to verify the found value with your multimeter.

In general the tolerance band is separated from the rest of the bands by a very slightly larger gap. It can be hard to tell sometimes.

Normally the band that's over the end cap is the right-hand one, but that top row looks pretty ambiguous. The bottom ones are 220 ohms 1%, the top ones look like 220K 1%.

Measure them with an ohmmeter then check with what it should be- there's only two combinations, and not many values have brown as the left band (the most common -1%- tolerance band for 5-band through-hole resistors).

It seems the 220R 1% is wrong... the top (red) band is farther from the other 4 than the bottom band (brown) that is closer to the other 4 bands, so, red will be the tolerance (2%). Looking at the photo I could almost say it is not 220R but 10kR 2%. The top resistor is very difficult to know what side band is the tolerance. The only great tip for 5 bands resistors, is that Black, Orange, Yellow and White are not tolerance, so in case of all bands being spaced equally and one of those colors being at the side band, it is the first digit of the value.

For example, it looks like some of your resistors in the picture are marked as follows: red-red-black-orange-brown. If these are 1 percent resistors, the brown band, per the deductive logic, is the 5th, tolerance band. The first three numbers are the three digut value: 220 (red-red-black). The 4th band is a multiplier: X1000 (orange). So these are 220 x 1000 resistors: 220,000 ohms. 220K ohms.

As some other persons said in their answers, a resistor is not a polarized device. There is no "+" or "-" orientation. You can insert a resistor into a circuit without worrying about which end of the resistor is which.

3
Identifying a resistor with implausible or impossible color bands
3
Find the resistor's value
0
Using a transistor as a heater
3
How many ohms do you need before you need a resistor?
0
Charging a bank of batteries in series with a resistor
1
Identifying strange burnt resistor color code
0
How to intentionally overload almost any value resistor with a DC power supply?