How much current can Solderless Breadboards handle?

I'm working on a project with a few stepper motors. I want to breadboard them so I know the circuit works well before creating a physical PCB.

Each of the three motors is rated 2A, but I'll be prototyping with 1A (controled with driver chip) at 12V. How dangerous is this much current on a solderless breadboard? It's a cheap one I picked up on eBay, so I doubt that it's made with super high quality materials. I won't be leaving it plugged in for extended periods of time and it'll always be supervised with me there if it receives power. Is this a bad idea?

Note: each of the motors will be on its own rail with its own wire coming from the power source.

Engineers with a conscience don't let others use breadboards.

Oh, I know, it starts out easy, like any other drug. You're uncertain of yourself and instead of doing calculations, or even back of the envelope calculations you say to yourself " I'll do the easy thing, I'll breadboard it- I don't have to think too much and then I can move on". But that is the easy lie, sort of like using SPICE (but I digress) when you should be calculating \$g_m\$.

So you try it, perhaps your friends are doing it too, you want to fit in. And hey! it works, and you didn't have to spend too much time at it. But in doing so, you don't get the practise of doing those calculations, that skill never develops and eventually you end up being dependant upon the little suckers.

and then they turn on you

You're projects have started to grow, and get larger and say you want to show someone "the cool thing" you have been doing. And they want to touch it and you jump at them, not willing to allow them to touch your baby, your precious.

I was lucky when I started out. Someone gave me a breadboard to work with, and I now suspect that they did it on purpose. The thing is, this breadboard was damaged, and I wasted hours trying to get something running when it was a faulty breadboard. I didn't have that internal modelling ability, I didn't know what to expect, so I wasted time. After than once I never once used a breadboard again.

Using a breadboard is an easy way out, it's an addictive drug and if you persist you'll one day find yourself wondering " hmm, can I run One Amp those those little traces?" maybe you can. But the real question is, should you? with that much power, what happens when the board shorts out in behind (like they are wont to do)?

Listen, there are lots of ways to prototype things that take only a little more time than a breadboard that are semi-permanent, are not fragile, are smaller and more importantly allow you to build high performance circuits (be that high amperage or high frequency). Use protoboards or dead bug the circuit.

Being a little slower actually is a good thing, because you end up with something that can be handled, doesn't stop working the moment that someone sneezes and most importantly ... because you are going to put more effort into it, you learn to actually calculate before you commit. You end up learning more.

So kick the habit dead bug that sucker. You'll find that you get a better circuit by far.

I have been breadboarding for several years, and I keep the current through the traces below 500mA just to be safe. Anything more than that I run through separate wires. I suppose one way to check a breadboard, if you have one that is no longer any good, would be to dig out one of the metal traces and run an increasing amount of current through it until it becomes hot to the touch. Stay below that and it should be fine, but remember that only tells you about that particular board, not necessarily all breadboards. But that will put you in the ballpark regarding safe limits.

In ref. to Breadboarding Motor Circuit. I Have Been Breadboarding Circuits for a While & In That Time, Have burned a Few. The plastic separating the Metal Channel is very Thin. As to, How much current the breadboard may take, I like to Keep It below 0.5A & that will also depend on the Voltage.

I've Learned to Keep the Current Low, while on the Breadboard. Keeping the Components that draw more Current off The Board. Using Jumpers, Perf-board.

TLDR; Lots of boards that provide ratings say 1.5A @ 36V, but most solderless breadboards do not provide a rating. 1A @ 5V (or any 5W current/voltage combination up to 36V) is conservatively low by comparison, but will probably be safe on any random board for long periods of time.

I realize this is an old question, but here goes;

The answer which placeholder provided is also correct. =D

EDIT: Please don't take those power numbers as the amount of heat dissipated in the breadboard, they are just the amount of power that can be safely transmitted through any one trace.

2nd EDIT: I still stand by my 5W number as a good guide for boards of unknown rating, but upon further investigation, Here, and here, it seems that a boards that do provide a rating state 1.5A @ 36V. Also, the voltage I mention is not the safety rating for electrical breakdown or arching, but a 'rule of thumb' for power purposes. You can probably go all the way up to 36V with no issue on any random board, but I wouldn't bet on any random board to have enough material to not heat up running the full 1.5A. 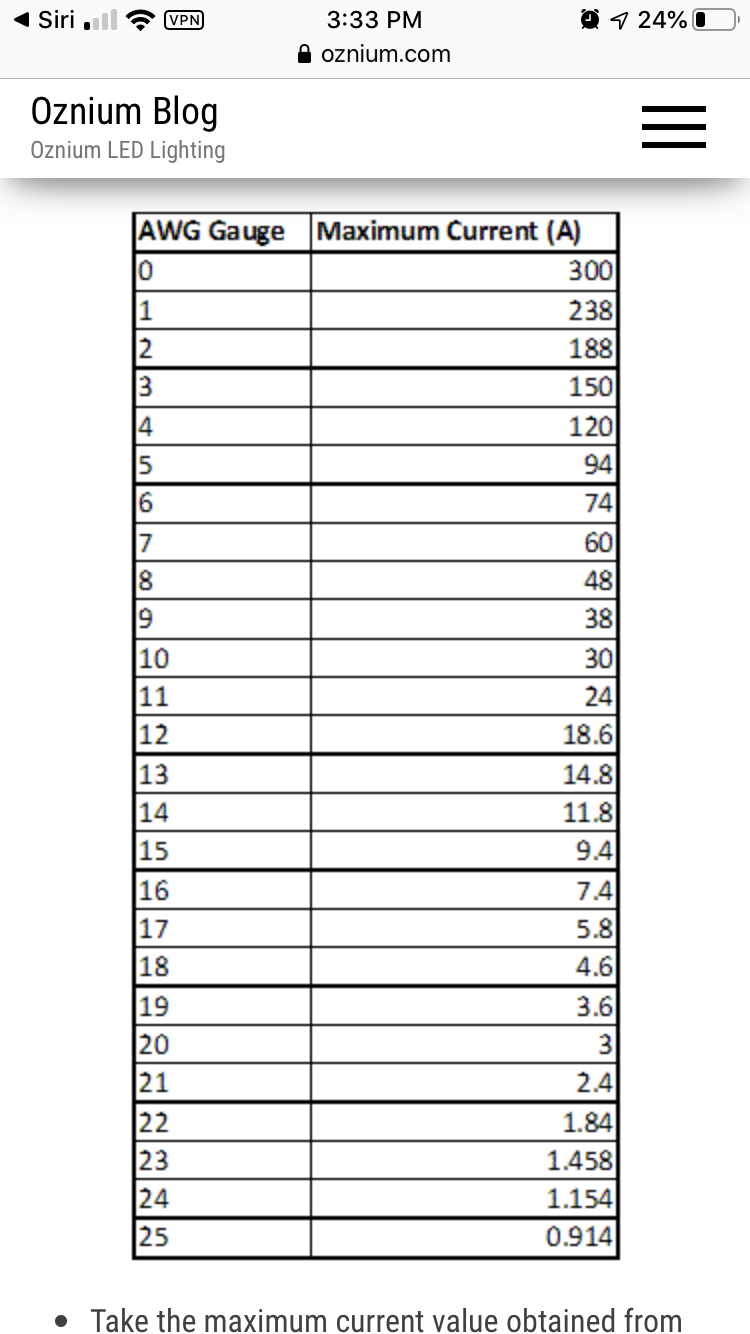 There is so much more on these Electrical Projects to think about, but the original question posted means that someone out there cares about doing his work properly. The Maximum Amp draw per gauge of wire Chart, shows that the breadboard kit wire at 24 gauge can only handle 1.154 Amps, which supports the 5 Watt or less theory.

The answer for his project and most, is to simply purchase a proper Terminal Strip, 14 gauge wire (for Load wiring carrying the 10 Amps), and 18 gauge wire for your 24 Vac Control Circuit, 100 VA Step Down Transformer with a circuit breaker, Relays with correct coil voltage, Vdc converters, time delays, isolation transformers and any other types of control interlocks and transducers that’s you can come up with using that handles 4 Amp Low Voltage Control circuits and 10 Amp Load Circuits, which will easily handle his 2 Amp motor load.

Projects look so much nicer when the Controls are located in a Control Panel with a perforated backplate for ease of mounting devices and can be purchased at KELE, Grainger and possibly Amazon these days.

Not the answer you're looking for? Browse other questions tagged current safety breadboard or ask your own question.

68
How much voltage/current is “dangerous”?
3
Solderable solderless breadboards
11
How much current can my 74HC595 handle on each output pin?
4
Solderless breadboards: standard size specifications?
0
How much current can this 74HC245 handle on each output pin?
12
How can I diagnose possible problems with my breadboards?
0
Will this lithium ion battery cause too much heat and fry components?
0
How to find out how much voltage and current a soldering agent can handle