What is an easy way to program an ATtiny microcontroller in C without an ISP?

I understand the "most raw" method to program an AVR microcontroller is probably with an ISP such as the AVRISP mkII.

However, I'm after a method that doesn't involve me having to purchase a $40 tool for a one-off project.

I have at my disposal a computer, an Arduino Uno, and a Raspberry Pi.

I'm not really interested in using the Arduino IDE and writing sketches. I want to get down into the low level code which is possible in C, preferably using an IDE such as Atmel Studio.

As I understand the Arduino Uno has an ATmega16U2 which connects to a computer via USB, which is used to program the ATmega328P.

Is the ATmega16U2 acting as a ISP here? If so, can I use it to program the ATtiny? I've gone through the schematic, and it shows the mega16u2 has an ICSP header, but it's connected to the mega328 via TX/RX lines.

No, that chip is acting as a USB -> RS232 TTL adapter. The 328P chip has a serial bootloader installed on it which accepts commands through RS232 to program the chip.

You can install the ArduinoISP sketch on the Arduino (included with the Arduino IDE), which then turns the Arduino into an ISP that can be controlled via AvrDude (command line program) to program the ATTiny through ISP.

There are many tutorials and examples on the Arduino forums and playground.

Both Arduino and the Raspberry Pi can be wired up as an ISP programmer with AVRDUDE.

You can use a 5x2 10 pin header and wire up your own programmer, such as this: 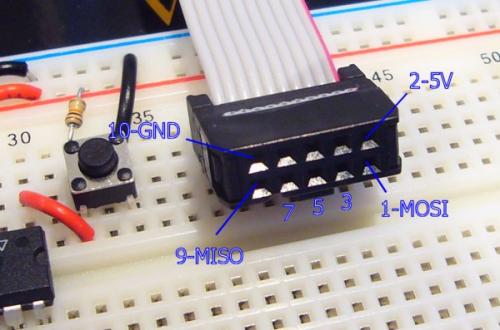 Use the Serial port programmer, with supporting hardware it should be far less than $40.

This programmer will be specific to AVRs, so that 'one off project' thing isn't entirely true for this piece of hardware.

That's how you physically get the code onto the board. There are several ways to compile and upload the code as well, using any of your favorite editors, makefiles, and the like.

Not the answer you're looking for? Browse other questions tagged arduino microcontroller avr isp or ask your own question.

3
Am I able to burn a bootloader and program with an AVR ISP?
2
Unable to upload Arduino sketch to Arduino Uno using AVR ISP MKII and Ubuntu 12.04
1
What do I need to program an ATmega 168?
2
AVRISP mkII not reading device signature
0
How can I flash an AVR using an Arduino without using Arduino IDE?
0
Arduino as ISP programming the Arduino, not the connected ATmega328P
1
AVRISP mk2 clone can program Arduino Uno, but not stand-alone ATMega328P
1
AVRISP mkII can't connect with target when using an AVR on a breadboard
1
Arduino Nano ISP turns into the target program (as well as target MCU)
1
Programming Arduino AVR MCU with Atmel ICE