Female Rectangular Headers with long pins (passthrough style) are used to stack/connect an Arduino shield board to the Arduino board. 1x8 and 1x6 position headers are easily found. 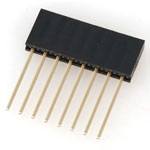 Problem: However for the Arduino Mega, it has a 2x16 position header. Does 2x16 female pass-through headers exist? Or must we modify 1x8 headers to turn them into 2x16?

Generally there is no modification necessary. Two of the 1x8 headers can be used side by side to mimic the 2x8 configuration. (Note that: Yes it is possible to find long tailed dual row headers in the market).

You could probably use a small amount of epoxy or silicon adhesive to glue the bodies of the two single-in-line headers together to create the 2x8 equivalent parts. If you do this please be aware of some things to consider:

The last two items above may be inconsequential considering the available tolerances of pin headers and the ability of the pins to flex around in their housing pockets.

Not the answer you're looking for? Browse other questions tagged arduino voltage pcb or ask your own question.

3
Change programatically pin number in shield software library?
5
What do I need to do to use a R3 Ethernet shield with a R3 Arduino Mega 2560?
0
Redefining Slave-Reset-Pin in MegaISP on ATmega2560
0
Bottomless SIP Socket/Machine Pin Header?
2
Advice for Grounding and Shield Placement
0
inverted PCB plug approach (to connect two single sided boards with jumpers)
0
Pulldown to prevent floating input pins for multiplexer