I've tried to recreate a circuit from what I think would be a NOT gate, based on some other schematics and breadboard examples that I've seen. 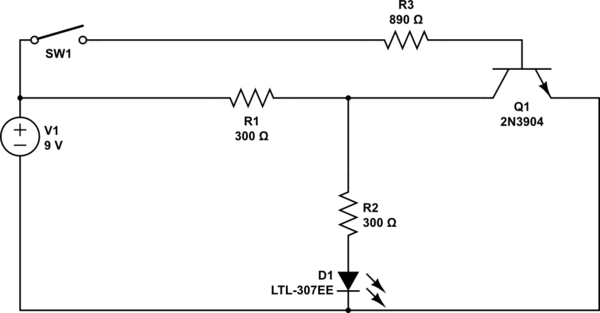 For this to be practical, I think SW1 would go away, and instead be substituted for some other voltage source as an input, but I've inserted SW1 and attached it to the same voltage source as everything else just to simplify the diagram...

Anyway, my assumption is that when there is charge going into the base of the transistor, the charge flows through the collector, out the emitter, and straight to ground (the negative end of the voltage source). So, in this case, does the charge not flow through R2 and through the LED, somehow? It seems to me that this conclusion must be correct, or else the LED would light up, right? But apparently, electricity does not take the "path of least resistance", so to speak.

Conversely, if the base of the transistor does not have any current, I assume the current stops at the collector of the transistor, but since the circuit must be complete, pressure moves the charge through R2 and the LED, then to ground.

I feel that I am missing some fundamental principle involved in this. Any thoughts?

It is conventional to draw circuits so signals flow from left to right, like so: 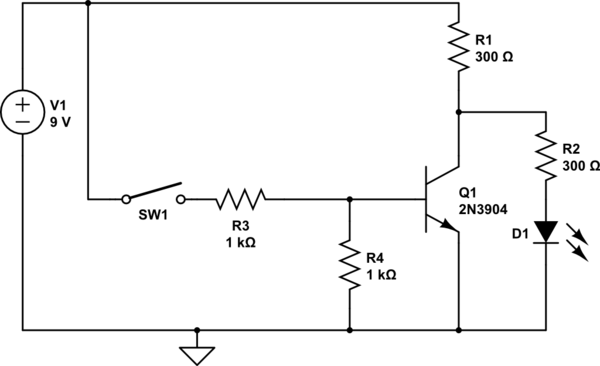 (You need a base resistor, R3, to limit base current, and a resistor from base to ground to ensure that the transistor does turn off when the switch is open)

With the switch open, the base will be held at ground by R4, so no current will flow through the transistor, so the collector will rise to a voltage determined by R1, R2, and the 2 volts or so voltage drop in the LED - this will allow current to flow through the LED and light it.

With the switch closed, the base will be pulled up, allowing current to flow through the transistor. If the resistors are selected correctly the transistor will be saturated, pulling the collector down to about 0.2 volts. As the LED requires about 2 volts across it, it will not pass any current.

You are correct for the most part, but what you have here is essentially two switches that are working in inverted states.

If you drive the base of the transistor then you will draw about 29mA collector current from V1 and force, assuming saturation, the collector to be about 200mV (Vce sat). Current would flow through the diode if the voltage at that node was sufficient to forward bias the PN junction of the device, but that is not the case. So, what happens here is that when the transistor is ON, the diode switch is reverse biased (off), and when the transistor is OFF, it provides a high-resistance path (an open) and current will flow through the two series resistances and drive the diode. 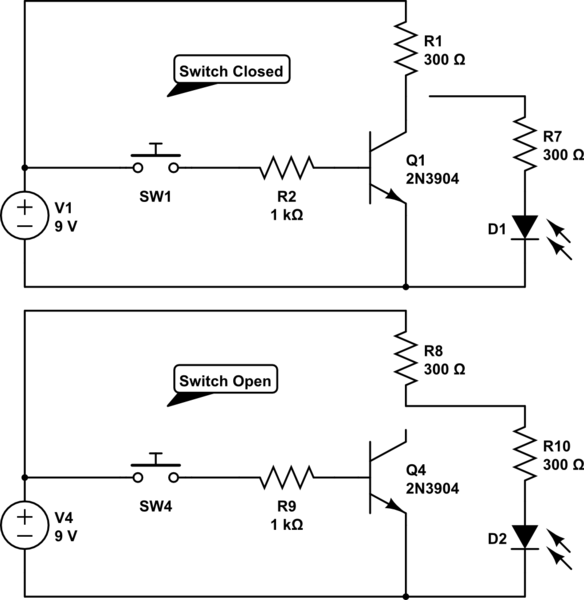 It's simple, really. When the transistor conducts, the current has to choose between going through the collector of Q1 to the emitter and then ground, or going through R2 and D1. The diode only allows current to flow when biased, which in practice (for the range of currents in which the LED is simultaneously visible yet not damaged) means a constant voltage drop in the LED, perhaps 1.5V to 2.5V depending on LED color and other properties. There's also an IR voltage drop in R2; say you must apply at least 1 mA for the LED to be visible, then you're looking at a 0.3 V voltage drop in R2 (\$300 \Omega \times 1 \textrm{mA}\$).

So, unless you apply somewhere between 1.8 V and 2.8 V in the branch of the circuit containing the LED, it'll basically look like an open circuit (very high resistance). Now the transistor conducts current much more easily, clamping the voltage at a Vce(sat) = 200 mV as mentioned by the other answer. At that voltage, the LED is not biased at all, so it does look like an open circuit, while the transistor looks almost like a perfect short circuit (save for the voltage drop of 200 mV). So indeed the current chooses the past of least resistance, which is the transistor in this case.

When the transistor is not conducting, then no amount of voltage applied to the collector will allow current to pass. On the other hand, when applying 1.8 to 2.8 V to the branch containing the LED, it will bias the LED and let current through. So again the path of least resistance is being chosen: the resistance through a transistor with no current flowing into the base is effectively infinite.

2
Does any current flow through C-E of NPN BJT when the base is floating?
2
Why is my transistor ON when charge is only going to the base?
0
Microcontroller output does not change when connector to MMBT2369
1
does NPN transistor allow current to flow when applying +ve to base from diff battery?
11
Why does the current still flow through the collector eventhough the transistor circuit has no Vcc
4
Why does this transistor circuit light the LED?
1
Charge battery through the transistor
10
Building NOT gate with transistor -- output remains always high
2
Does current flow from the emitter through the base in this circuit?