I'm not an electrical engineer. I have an unusual need and would like suggestions as to how to proceed. I have an application that needs very high currents at very low voltages. I'm trying to heat a thin strip of aluminum to temperatures near 100C quickly and then control the temperature. My calculations suggest about 150 to 200 amps at less than 0.1 volt. About the only idea I have is using a toroidal transformer with maybe 1000 turns and thick copper bar passing through the center of the toroid connected to the aluminum strip. I can use either AC or DC current and if AC, I'm not necessarily limited to 60hz.

Any and all good suggestions are welcome.

Power supplies from arc welding devices are quite capable of what you describe. You may also try a soldering gun (the kind with a transformer inside) replacing the tip with your stuff.

Just be aware that you need really really thick wires for 100A. The problem will be worse with high frequency AC because of the skin effect.

As far as the regulation is concerned you should be able to use a simple PID regulator with a thyristor output for the soldering gun. The arc welding supplies may be more difficult depending on their internal construction.

How thick is that strip? Aluminium is very reactive and oxidizes instantly when exposed to air, leaving an insulating coating on the aluminium. The resistance of this coating may be much higher than the strip itself, so that the largest part of the power is actually used to heat the contacts, even melt them. Make sure the contact surface is large enough.

No need to wind a transformer, since 1-turn output should work. On ebay find a 120V, 200VA toroid which has an obviously open center (some are epoxy-filled!) The secondary will be unused (can be anything.) Pass a metal bar or even copper pipe through the center. That should easily give you 0.1VAC output on the ends of the pipe.

If it's a bit too low to drive thin foil, you might need to use two pipes, with outputs connected in series for 0.2VAC output (really it's a 2-turn secondary.)

For general reference, here's measured values on the transformer in a typical (Radio Shack) 230watt soldering gun: secondary is 5 turns, the AC output is 1.0V unloaded, falling to 0.6V with a 200W load (soldering tip.) That's 0.1 - 0.2VAC output for each single turn in the secondary. (This is typical for the power transformers I've measured in the past.) Clamp-on meter says the soldering-tip current is over 250 amps.

Note that the output current starts dropping as soon as the load conductor heats up.

Also: To avoid the problem with soldering to aluminum, I'd also try copper foil, or for higher ohms, some thin brass sheet from a hobby store.

You could build a voltage-divider network going into the strip of metal. Use a few high-current rheostats as resistors. With this, you could drive it with direct current and be able to get very low voltages.

Consider the N-Generator. Using a basic prototype was able to produce less than 4 VDC with several hundred amps. Melted a 8" #8 piece of copper ground wire in seconds. Working on design that will self sustain. I know sounds like fiction but it does work. 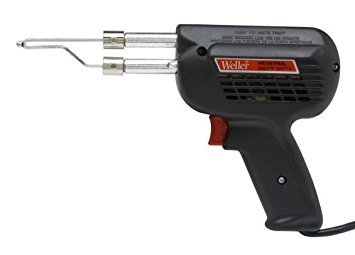 This soldering gun is a transformer with lots of turns on the primary and a single turn secondary (built of very thick copper). The secondary circuit includes the heating element.

You could try getting one of these (expect to pay a couple tens of bucks for a cheapo one) and wire your heating element in place of the existing one, with big burly thick copper.

Another popular option is to use a microwave transformer, because these include an air gap which means in case of a short (which is the case here...) bad things happen less often. There are lots of DIY spot welders on the internet using these transformers, and you should in fact google "DIY spot welder".