Do I need a transistor? I guess I'm looking for a switch that will "close" when there's 1.4V? I'm a complete noob at electronics, but I'm alright at physics and understanding the equations

You're asking for a logic level shifter.

There are packaged chips that do everything for you, but it's also not hard to construct one yourself from discrete parts. There are many ways to do it, each with different tradeoffs.

I find this schematic, from NXP Semiconductors' AN10441 to be a quite elegant way to get that function:

For the example shown in the schematic, with 3.3 V and 5 V logic levels, any small-signal MOSFET will work, such as the ubiquitous 2N7000. Most generic MOSFETs have a VGS(th) maximum too high to work with your 1.4 V logic level, however. You'll have to look to something more specialized like a Vishay TN0200K or a Zetex (Diodes, Inc.) ZXMN2B14FH.

The values of the pull-up resistors (Rp) depend somewhat on the application, but will have a wide range even then. 10 kΩ is a popular value here, giving a good tradeoff between speed, noise, and current draw. I could see using a value as low as 1 kΩ in certain circumstances, and values North of 1 MΩ in others.

The app note describes how the circuit works, but to paraphrase:

This tendency of the circuit to "ride high" by default may not be appropriate for all applications. If one end can ever become disconnected and the device left connected isn't actively pulling the data line down, the data line will go to the high level. This is fine for I²C, since the high logic level is the normal idle condition. If your data line doesn't work like that but neither end can become unplugged and at least one end is always actively pulling the line down when it wants the line to be low, this circuit will still work.

You can build a logic level shifter (that's what it's called) with a few discrete components (transistors and resistors) or you can go for a one-component solution, i.e. an IC. Most ICs won't accept input voltages as low as 1.4 V, but I found Fairchild's FXLP34 which does. (You want the FXLP34P5X, the other versions have leadless packages and are therefore more difficult to solder)
Connection diagram: 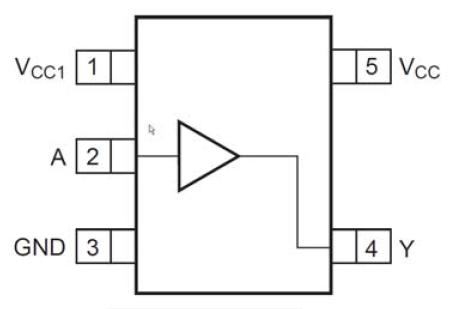 A is where you supply the low-level input signal, Y is your "high"-level output signal. Vcc1 is your 1.4 V connection, connect the required output voltage to Vcc (up to 3.6 V).
The device may be hard to get in low quantities, maybe a distributor can supply with a few samples.

PS: yes, that tiny cursor is also present in the image in the datasheet :-)

edit
An alternative part, in case PCB space is a premium: the OnSemi NLSV1T34 is available in a Damn Small™ 1.2mm x 1mm DFN. For mortals also in SOT-353.

The basics of the problem as you have described it, appear to be called either a "logic level shifter" or converter. The essence is that you have a digital logic (binary) signal at a given signal level, and you wish to use adapt it to another signal level.

Ideally, you should also be aware of the switching threshold as well. E.g Logic signal voltage levels that shows the TTL logic voltage levels in the first two graphics.

If you wish to amplify a logic signal that is either 0 or 1.4V, then a single transistor can be configured as an electronic switch to act as a level converter.

In your application the output is the 5V-level output (0 or 5V depending on low/high status) and M1 could be a common small-signal N-channel enhancement mode MOSFET transistor, the 2N7000 in TO-92 plastic through-hole, and SMT packaging.

The resistors R2 should be 330Kohms, (additional resistor component details are not critical, e.g. 1 or 5% tolerance, 1/8 to 1/4 Watts rating are fine).

The other values (tolerance and wattage) are common through-hole component values used to select real-world component, but are not critical in this application.

Since you didn't mention any high-speed requirements (i.e. switching speed), so this should work in most simple cases.

I've adopted this approach of using a MOSFET rather than a bipolar junction transistor as I had trouble making a single BJT give the desired voltage swing when switching. From a design point of view, the nice thing about FETs (and MOSFETs) is that they are voltage controlled devices (in terms of a design model), rather than current-controlled as BJT are.

To change the voltage, you could use a trusty hand-wound transformer. Go to a bookstore and pick up a copy of the ARRL General Class License Manual for ham radio. It teaches you how to do that.

For the voltage-controlled switch, Panasonic makes an IC called the 1381 voltage-based trigger. It's designed to turn off a switch when voltage drops below a certain level (usually for turning off gadgets when the battery dies). It's available from Solarbotics.

If you just want a switch that closes when the logic signal is 1.4V and opens when it's 0V, then you need very little:

The transistor will turn on when the logic level is high, and off when low. You can connect whatever you want to control between the power supply and the collector of the transistor. This could be just a resistor if you want to make a logic signal that goes between ground and the supply, although the signal will be inverted from the input logic signal. Or it could be a LED with appropriate current limiting resistor in series, or many other things. If the thing being driven can be inductive, then a diode should be added from collector to power to catch the kickback current when the inductor is turned off.

The power voltage is independent of the input logic levels, and only needs to not exceed the transistor's max Vce spec, which is 40V in this example.

Do you have control over the waveform from the low-voltage side? If so, maybe a rectifier voltage double circuit can be used to charge pump to the higher voltage. The only gotcha with this approach is that you need to have the low-voltage side output go from a "high/low" signaling to a "carrier/no carrier" signaling.