Why doesn't current flow in the resistor in the bottom right? What do I need to read about electric theory to be able to correctly trace current flow and solve problems like this?

The reason is simple. Current always follows path of least resistance. There is connection to the ground made with no resistor and therefore it will be preferred to one with the resistor.

As for the theory, first make sure that you're familiar with two Kirchoff's laws and with Ohm's law as most of the things are derived from them. After that, you should know that you can short-circuit point of same potential in a circuit and nothing will happen.

Next step is to make an equivalent circuit of the ground points. That is to say that the two grounds are actually shorted together. So this way, you get a current divider. If you do the calculations, you'll get currents which are going through the shorted ground connection (consider it a 0 $\Omega$ resistor for calculation purposes) and the one with the resistor. Numbers will say that the current through the short circuit is infinite and through the resistor is zero.

Also, here is a circuit which is equivalent to your circuit. 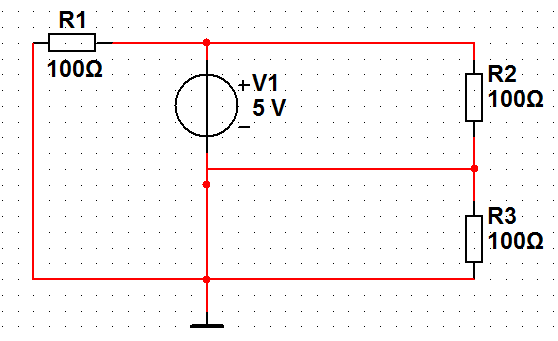 It is now obvious that the resistor R3 is shorted out.

Once you get the 3 laws I mentioned at the start, go to this article and read it. Make sure you pay extra special attention to the See also section! Theorems listed there are the basic theorems of circuit analysis.

Both sides of the resistor are connected to the same point: ground. Since there is no voltage across the resistor, no current will flow through it.

68
What is ground and what does it do?
6
When does and when doesn't current flow to ground?
0
How does earth ground complete the circuit?
0
Connecting Ground Paths of Low-Current and High-Current Circuits
0
Basic: Current flow and grounding
0
Voltage gradient across an antenna (and how it drives an AM radio)
4
Difference between the following two very basic circuits
1
Current flow with a potential difference