I found a PIR amplifier circuit and would like to understand better how/why it works. The purpose is mostly to learn more about analog electronics. 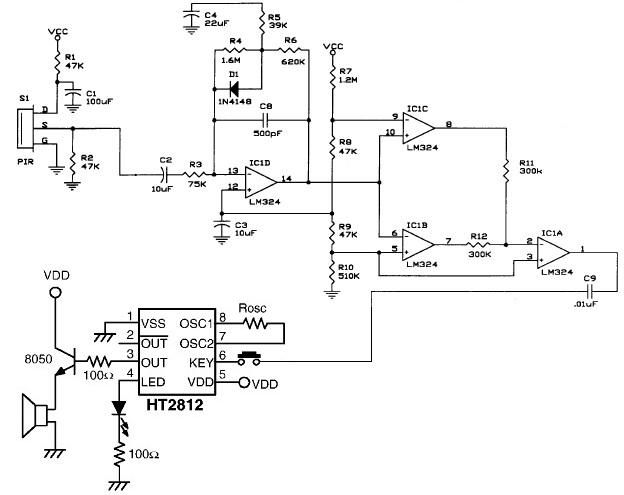 The raw PIR sensor (not one with built in circuitry) outputs approx 1v and has swings in either direction from this by approx 10mV depending on motion. The signal is quite noisy though.

This is the raw output of IRA-E700 (without lens) with R1, C1 and R2 from the schematic. If i move my hand over it i can see the average voltage rising or dropping by 5-15mV. 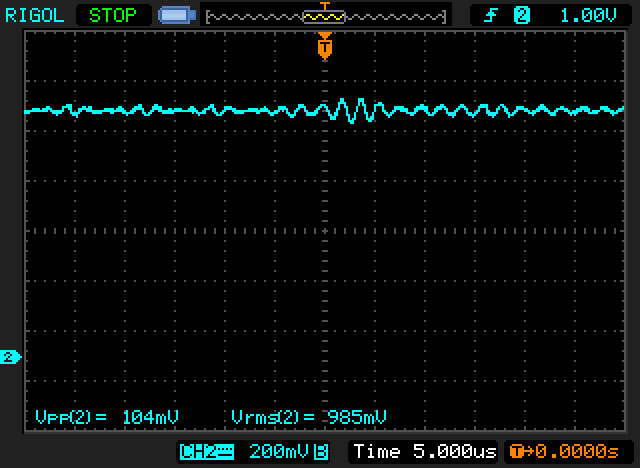 My assumptions from the schematic:

While I think I understand the general circuit I have some questions about the details:

Potential changes I could do (?):

If you have other examples of PIR circuits (preferably with explanation) that would be greatly appreciated too!

This is basically a classic window comparator, with stuff around it to make is actually useful in the particular application.

PIR sensors report changes in IR accross the sensor area. C2 removes the DC bias, and the circuit around IC1D amplifies the result and also does some frequency filtering. This is probably in part to reduce frequencies that aren't relevant and therefore just add noise, and in part to get the response of the overall sensor+filter that is useful for detecting motion.

IC1C and IC1B are the window comparator. R7, R8, R9, and R10 are a divider chain making voltages for the output of IC1D to be compared against. Just from the topology without looking at any numbers, you can see that the threshold for IC1C is higher than that for IC1B. Also see that the input signal into the window comparator (outout of IC1D) is fed in to the two comparators (IC1C and IC1B) at opposite polarity. In the "window" region, which is the voltage range between the - input of IC1C and the + input of IC1B, both amps will be driving low. Below the window region, IC1B will drive high and IC1C low. Above the window, IC1C will drive high and IC1B low.

The two comparator outputs are averaged by R11 and R12, then the result compared to a threshold by IC1A. This threshold is set so that IC1A drives high only when both comparator amps are driving low, meaning the voltage is in the window region.

The digital signal that indicates whether the sensor output is within the window region is capacitively coupled into this HT2812 thing. I didn't look that up, so I don't know what exactly it does, but from the transistor and speaker it is probably intended to produce a beep when motion is detected.

I'm not sure what the point of the switch in series with the KEY input is. When the switch is open, the HT2812 block won't receive the motion signal. If that is the intent, then powering everything down would be the more obvious approach, so there is probably some additional feature it supports. I don't know why you'd want to only sound a beep due to motion when a button is pressed, but that appears to be what what this circuit will do.

This is not true because there is a bias voltage on V+ and V- (1.54V). If I did my math correctly (and for DC operating point only) there is actually an offset to the gain that is rather interesting:

Which is obviously in infamous inverting amplifier if Vn (inverting terminal) = 0. Plugging in values we get:

Perhaps my math skills are subpar, but I was not able to quickly see a closed-form solution. It's interesting to note that the gain then grows more negative as Vi increases, and more positive as Vi gets smaller.

Also I don't think C2 and R3 are making any sort of high-pass filter. Rather, C2 decouples the output of the sensor to to the input of the amplification stage. C3, in effect, passes high-frequency, but the combination of these two passive components does not have an output to speak of, so it's not really a filter in that way. R3 sets the gain, as you said. Feel free to correct me if I am wrong here.

Recall the equation for op amps: Vout = A(V+ - V-). Which says that if V- > V+ (without feedback) then the output rails to the negative supply. Likewise, if V+ > V-, the output will rail to the possible supply. If you look at IC1C, for example, V- is biased to 1.67V. Therefore, the output is always at the negative supply until the output of IC1D becomes greater 1.67V. Similarly, IC1B has V+ biased to 1.41V, so the output is always at the positive supply unless V- becomes greater than 1.41V. I say this because your point 6 contradicts this - but should rather say HIGH where you write LOW

I don't see the purpose if that is the case. The high-frequency components have a path through R4 and R6.

Looking at the schematic from the datasheet, D and S represent Drain and Source of a mosfet, so R2 is connecting the open drain to ground but I am not sure exactly why as it appears to be driven by a crystal of sorts.

Not the answer you're looking for? Browse other questions tagged operational-amplifier sensor amplifier analog inverting-amplifier or ask your own question.